Image
Obese beagle dog gets help with diet and exercise to lose all those extra pounds.
By Christelle L. Del Prete 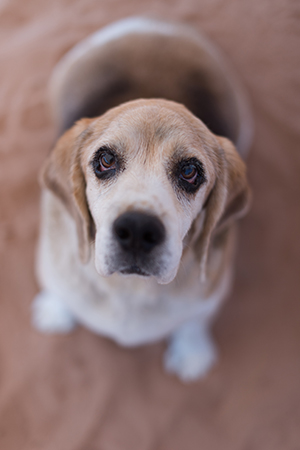 When Gus came to Best Friends last July, he didn't even look like a beagle. At 77 pounds, he was so oversized that he looked like a beagle blimp. Sadly though, the poor guy wasn't floating on air. He felt as heavy as he looked, and he could barely walk.

It wasn’t anything that good old-fashioned diet and exercise couldn’t fix. But like many people about to embark on a journey to wellness, Gus needed some extra motivation in the beginning.

Chunky beagle gets a lift

When he arrived at Dogtown this past July, Gus enjoyed being outside and wading in a kiddie pool — which took some doing to get into. But walking? Forget it. The seven-year-old dog wasn’t used to exercise, so every step was a struggle. Sometimes he’d look up at caregivers with his melt-your-heart hound dog eyes, as if to say he just couldn’t bear to move another inch.

No one wanted Gus to overdo it. That would do more harm than good. But if he was going to get to a healthy dog weight, he had to get moving. So Dogtown caregivers found a way to show Gus that walks are fun.

Enter the Gus bus, a sturdy yellow wagon that they could lift Gus into so that he could get a lift to the trail or to the dog park. Maybe, if Gus could see that fun and interesting places were outside of where he was staying in Dogtown, he’d be more willing to try walking to them himself. 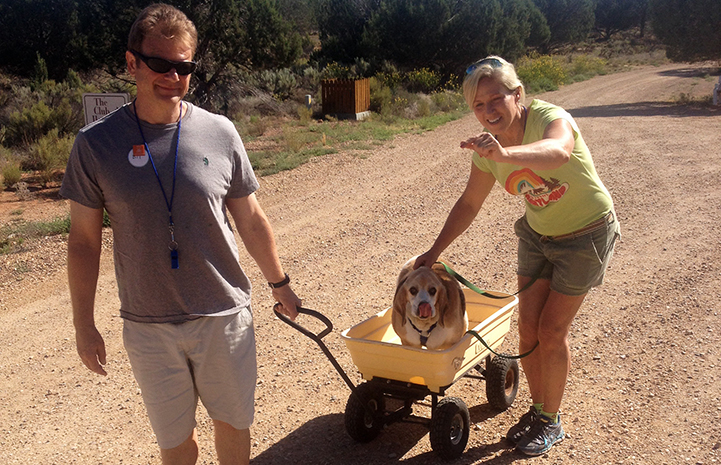 One step at a time

At first, Gus was content to be pulled around by his caregivers and Dogtown volunteers, without lifting a paw. But gradually, as his diet began working and his curiosity grew, he began stepping out on his own four feet. It wasn’t very far in the beginning. Gus only managed to walk the trailhead (just across the street from his building) and back again.

But it was a start, and the day soon came when Gus walked a few feet out onto the trail — and then a few more. In no time he was walking the quarter-mile loop. As he kept shedding those pesky pounds and became less bulky, each step became easier. Before he knew it, he was hiking the half-mile trail with a spring in his step and his long ears flapping in the breeze. 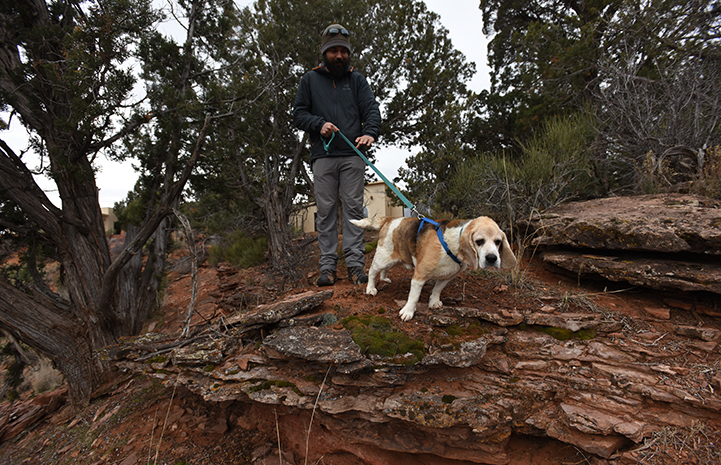 Closer to the average beagle weight

Of course, like anyone working on healthy habits, Gus has suffered a few setbacks. In his early days at Dogtown he needed some dental work to free him from mouth pain. Later, a bum knee that he’s still healing from kept him sidelined for a while.

But Gus isn’t one to give up after coming so far. After only about four months at the Sanctuary, he’d already lost nearly 30 pounds. That put him much closer to a normal weight for a beagle. 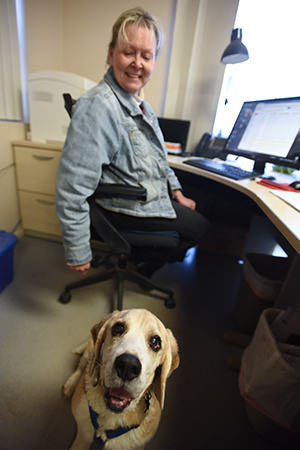 It’s not just about numbers, though. As Gus slimmed down, his energy level increased. That’s allowed him to become a lot more socially active. He’s gone on outings with volunteers and he gets to spend some days each week in a Best Friends staff member’s office. And he’s had a blast greeting people of all ages on the Dogtown tours.

Gus isn’t quite yet ready to float on air. He has a few more miles to go and a few more pounds to lose once his knee is fully healed and he’s ready to resume his regular routine. But it’s safe to say that the sweet fellow is no longer feeling weighed down. And he’d rather walk than take the bus.