Image
Bunny who is overweight is put on a healthy diet that cuts out high-calorie foods and starts an exercise plan that includes digging in the dirt.
By Christelle L. Del Prete 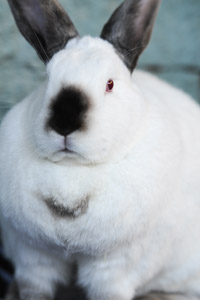 People often joke that a person on a diet eats “like a rabbit.” But how do you lose weight if you’re already a rabbit?

Putting a rabbit on a diet

When two-year-old Trixie arrived at Best Friends Animal Sanctuary back in December, there was quite a lot of her to love. Being overweight is just as dangerous to a rabbit’s health as it is for any other pet, so Trixie’s caregivers limited her food intake and cut down on excess sugar in her diet. That meant that she could enjoy healthy greens and high-quality rabbit pellets, but no treats like dried fruits, timothy hay biscuits, or any of the sweeter high-calorie vegetables and fruits like carrots and bananas. It also meant that Trixie needed to get a lot of exercise. Luckily, she took to that part of the plan with gusto.

Bunny who likes to dig

Like other rabbits at the Sanctuary, Trixie has a spacious indoor/outdoor run, but she also gets to hop around in a larger enclosed play yard with grass grown especially for the rabbits. Most of the bunnies are content to hop around and explore the grass yard and adjacent patio. But not Trixie.

The adorable Californian rabbit (she is all white, with black ears and a black nose) seemed to know exactly what she needed to do to get in shape. She immediately began sniffing around and investigating the perimeter of the patio. Then she got right to work. Between the outer edge of the cement and the fencing (which extends deep into the ground, so that predators can’t get in and curious bunnies can’t get out) is a narrow strip of dirt. It was there that Trixie began digging for all she’s worth, making her own personal tunnel.

One minute, there was Trixie in plain sight; the next minute, all her caregivers could see were her pretty black ears and red dirt flying everywhere. It’s certainly a good aerobic workout for a bunny, and her caregivers were thrilled that she took the initiative. In fact, it couldn’t have worked out any better. Now, after each excavation, Trixie’s caregivers fill the holes back in, pack the dirt, and check to make sure the fencing is secure, so she can go out and do it again next time.

Trixie has even shared her exercise tips with other bunnies, who now perform the same heart-healthy digging routine. And while she’s still on her weight-loss journey, she is feeling great and making new friends. She now has a best friend named Jerry, with whom she shares her run. She even lets him join in on the best part of her day: digging.

Meet all the rabbits at the Sanctuary.