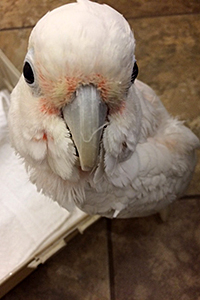 Every day that a bird at Parrot Garden finds a forever home is a good day. But the day that Nicky went home was one of the best. No one knew how long the senior special-needs bird would be at the Sanctuary before someone fell in love with him, but after only a few months Nicky was off to spend his golden years living like a king.

Nicky had a lot of things working against him throughout his life. Before he came to Best Friends, the Goffin's cockatoo parrot was born in the wild, where he was captured and forced to live in captivity. That already made him a less than ideal pet, since wild-caught birds sometimes have no interest in interacting with people and often struggle in captivity.

Luckily, Nicky adjusted to living with people when he was a young bird. He even had a person who loved and cared for him for many years. But like many rescue parrots, Nicky lost his home when his person passed away. Because parrots have such long lifespans, they often outlive their human families. That’s how he ended up with a small parrot rescue in Oklahoma. But it would be hard for the poor cockatoo bird to find another home because of his age and his special needs — or so everyone thought.

Nicky was obviously a senior citizen, and likely more than 30 years old. The USDA import band he wore on his leg meant that he was captured and shipped to the United States before 1992 (when the U.S. stopped allowing the import of wild-caught parrots). He also has some health issues, which aren’t uncommon for an old parrot — things like arthritis and cataracts, the latter of which has made him blind in one eye. And he picks his feathers as a result of an anxiety disorder common to captive parrots.

It was also clear that when Nicky came to the Sanctuary he had not had any step-up training. He had no clue what Parrot Garden caregivers were asking him to do when they tried to get him to climb out of his cage and step up onto their arms. That may seem like a small thing. But it’s one of the main ways people physically interact with birds. While Nicky would tolerate people scooping him up like a duck to set him on their laps, many adopters prefer that the bird they are taking home has had at least some stepping-up training. Nicky was starting from scratch at Parrot Garden.

Choosing to adopt a parrot

As it turned out, none of this mattered to Susan Tuck. Susan had already adopted several birds from the Sanctuary. She has a soft spot for hard-to-adopt rescue birds. That includes birds like Houdini and Kaccia, two cockatoos who had no interest in people but who fell in love with each other in Susan’s home.

Susan wasn’t planning to bring another bird home when she saw Nicky’s photo on the Best Friends website. “I really had no intention of adopting another bird — none whatsoever,” Susan says. “I was just curious to see if there were any newcomers. So there I was zipping along, looking at photos, when I saw a Goffin's cockatoo and thought ‘uh oh.’”

Thinking of adopting a parrot? 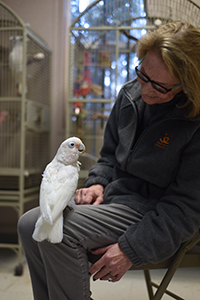 Hitting it off and heading home

Susan admits that, when she got on a plane to fly out to Best Friends to meet him, she thought of it as “a mission of mercy.” She thought no one else would want to adopt an older bird with health issues. But Nicky quickly proved to her that his age — and the problems related to it — took a backseat to his charming personality and youthful spirit.

The two hit it off at the Sanctuary, and soon Nicky was flying home with his new person. At a security checkpoint at the airport, just before boarding the plane heading for his new home in Massachusetts, Nicky perched on his crate and charmed everyone. Six security guards even gathered to check out the little bird.

In his new home, Nicky acts like a teenager rather than a senior. “He dances all day. He doesn't even need music. He chatters and bobs and weaves,” Susan says. “He is always in a good mood, and he is very funny. He wakes up early and goes to sleep late. And he loves snap peas, almonds and millet sprigs.”

In spite of his sad past, his age and his special needs, Nicky made the transition to his new home effortlessly. And now that he’s living in birdy paradise with his new person, every day is the best day of his life.