Image
After suffering a severe trauma that left her back legs paralyzed, Rio, a tiny, helpless kitten, was thrown in a dumpster. She can now walk.
By Christelle L. Del Prete

Rio wasn’t born into the life of luxury and love she has now. After suffering a severe trauma that left her back legs paralyzed, the tiny, helpless kitten was thrown in a dumpster. But fate was on Rio’s side. She was rescued, brought to the Sanctuary, and examined by the Best Friends veterinary team, who determined there was a chance she would improve with physical therapy – and perhaps even walk normally again.

To make that happen, Rio’s caregivers provided physical therapy every day. They gently wrapped their hands around her midsection, supporting her while she put some weight on her back legs and moved forward. Progress was slow at first, but Rio was a young and otherwise healthy kitten. Eventually, she could take a few confident steps at a time and even jump up on a cat tree. It began to look like the once-immobile kitten could lead a normal life.

Best Friends supporter Bill Coaker first saw Rio in a video about her on the Best Friends website. He watched it dozens of times and “wept every time.” When Bill visited the Sanctuary after seeing Rio’s video online, he was so sure the spirited little tabby cat would have been adopted by then; he didn’t even think to ask to see her. 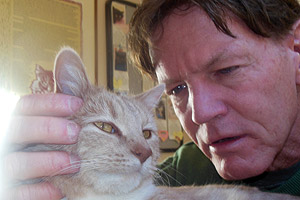 On Bill’s next visit two months later, he visited Benton’s House, where, to his surprise, he saw Rio’s photo and bio on the wall, which meant she was still there. He spent the remaining days of his trip getting to know her.

A month later, when Bill returned, and went to visit Rio, she recognized him immediately. That sealed the deal for Bill, who decided to adopt her and give her the loving forever home she so deserved. As the happy news spread around the Sanctuary, many Best Friends caregivers and volunteers came to see the miracle kitten off to her new life.

“It was clear to me that many people … were personally and emotionally invested in ensuring that (she) would have a very happy home,” Bill said. “I could feel that many people were counting on me.” And he wasn’t about to let them – or Rio – down.

Rio settled into her very own room at Bill’s California home, burrowed into a soft, fuzzy blanket, and began soaking up affection in what would become a tender ritual. Now, whenever Bill goes toward her room, Rio looks up at him, then turns and runs toward her blanket. Often, she’ll pause and look behind her to be sure he’s following. 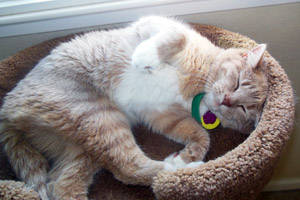 Because Rio’s back legs are still quite weak, Bill will continue her physical therapy for as long as she needs it. Rio loves trying to turn physical therapy sessions into cuddle and affection time. She has to do a bit of maneuvering in order to lie down; she curls her head numerous times as she gathers the strength to get down. After a half dozen or so head curls, Rio eases her body to the floor, rolls onto her side or back, and asks Bill for some belly rubs.

Though Bill makes her therapy a priority, he often gives in. It’s part of his promise to give Rio the miracle kitten, saved from certain death in a dumpster, “the very best possible life.”

Rio has found her perfect home, but there are many more adoptable cats at the Sanctuary.

Photos by Best Friends staff and courtesy of Bill Coaker