Image
Super friendly, partially paralyzed pit bull, a refugee from Hurricane Katrina in New Orleans, has been adopted into a forever home!
By Cathy Scott

Red, a friendly, partially paralyzed refugee pit bull from New Orleans, has gone to a permanent home. His new person, Diane McDermott, picked up Red on Wednesday, then drove him home to Florida. 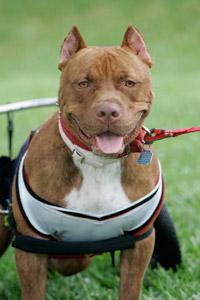 But Red didn't leave his temporary home -- the Longwood Animal Hospital and Pet Resort where he received therapy -- without a big send-off.

Party for special pit bull terrier who gets a new home

The day before, a veterinary technician brought in doggie ice cream and everybody gathered around Red for a farewell party. Then on the day he left, employees showered him with going-away Kongs, tennis balls and his favorite chewies. For the trip home, his new mom bought him a Harley-Davidson T-shirt and a seat-belt harness. He was strapped in, sporting his new shirt, and his belly belt put on. A Houston TV news crew was there to record Red's big day.

"He was sitting in the front seat of Diane's car," said veterinarian Lucy Gillespie, who works at the hospital. "He was ready for the ride. He thought all the attention was the coolest thing ever. He didn't look back."

Red survived Hurricane Katrina but ended up a stray. Last October, a car hit him. He somehow managed to drag himself back to the house of a man who had been leaving him food. The man called a Best Friends rescue team, who took Red to an emergency hospital where he stayed for a couple months after undergoing back surgery.

In January, he was taken to a temporary triage center and cared for by Best Friends staffers and volunteers. He became a favorite with volunteers, who sat with him, tucked him in at night, bathed him, played tug of war with him, and gave him treats. In the evenings, Red was allowed out of his playpen to scoot around a large area inside the center. Once he got a donated cart, he raced around the building.

Red underwent physical therapy at the Longwood pet resort, where he ended up staying for three months, receiving daily massages and one-on-one therapy. That is when Diane became interested in adopting him.

Red was shy with Diane at first, but as soon as she started giving him treats, he warmed up. 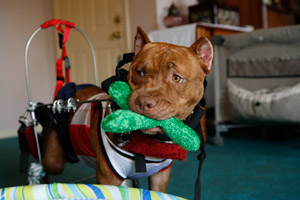 Diane, who lives in Palm Beach, Florida, learned about Red when she watched a story about him on CNN, which aired when Red was still in New Orleans. Diane phoned Best Friends, a home check was done and Lucy spoke with Diane's vet.

Preparing her home for a partially paralyzed dog

Diane was prepped about Red's needs. After she was approved, she began getting her house ready for the day when Red would go home. In a room she calls "Red's romper room," she replaced rugs with a soft foam flooring so he can pull himself around on the floor without getting rug burns. And she got a new king-size mattress for herself, covered in plastic, and put it on her bedroom floor without a box spring, so Red can get on the bed on his own. "He'll be sleeping with me," she said. She also installed a ramp from the bedroom to the back yard.

Last year Diane cared for her invalid father and also took in her brother, who later died of cancer. "I'm used to taking care of people," Diane said. "It won't be that different with Red." Her last dog died of old age and she was ready for another. Red, because his back injury left him semi incontinent and partially paralyzed, requires constant care with someone who is home during the day. Diane fit the bill because she works out of her home.

Before Diane and Red left the pet resort together, Dr. Gillespie coached Diane in specifics of caring for him, including putting him in and out of his cart.

While at Longwood, Red was doted on. During the day, he stayed in Lucy's office and she'd sometimes take him home with her at night and also on weekends. Employees regularly took him outside on the grass to play ball in his cart.

He also got five massages a day. As a result, Red began showing improvement. "He has started moving his right-rear leg a little bit," Lucy said. "He tries to use it when he's in the cart." Also, because of his back injury, his tail barely wagged. Now, after three months of therapy, he's again wagging his tail.

It was a bittersweet goodbye for employees at Longwood. "Everybody is very attached to him," Lucy said. "We all were crying. It was very sad."

"I'm going to miss him," she continued, "but I'm also happy he's going to have a one-on-one relationship with someone who has time to work with him. Diane is going to do great."

That's the whole point of fostering, Lucy said, "to get them forever homes. Red is getting the home he deserves."

Diane promised she'd give them progress reports. "We're all looking forward to getting pictures and e-mails from Diane," Lucy said.