A pelican untangled from fishing line 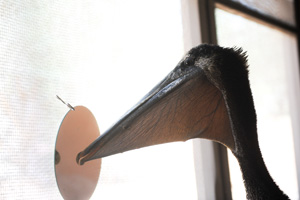 The magnificent young pelican radiates a noble air as he stands by the windowsill, dreaming of one day being master of the seas, or perhaps, more realistically, master of the rivers.

Today he’s looking much more regal than when he was spotted seven miles north of Lees Ferry in Arizona. That day, the young pelican stood on the far bank of the Colorado River, all tangled up in fishing line. The Arizona Game and Fish Department rescued the bird by boat and then eventually took him to Best Friends, the area’s nearest wildlife rehabilitation center. If they could get him help quickly enough, he might make it.

When the pelican arrived that evening, licensed wildlife rehabilitators Todd Moore and Bobbie Foster went to work. Bobbie sat with the bird on the floor while Todd gathered the necessary fluids and medication. The pelican’s gray feathers told them he was less than a year old (adults are all white), and as they carefully examined him, it was clear he’d been through a lot in his young life.

Despite feeling tired and scared, the pelican was patient as Bobbie removed the fishing hooks from his beak and his right wing. They also removed fishing line that was tangled around his left wing, as well as three more hooks that were hard to see in the matted feathers beneath the wing. After a thorough physical exam, they were glad to find that his injuries were not too bad. With antibiotics and good care, the injuries would heal and he would be OK.

They settled him into a big enclosure with soft net sides to rest for the night. He shook a little, tucked his head in and was soon fast asleep.

To the Wild Friends clinic

In the morning, he was on his way to the Sanctuary’s new Wild Friends clinic, where all sorts of wildlife receive special treatment. Digital X-rays assured the staff that the pelican had not ingested any hooks, and it appeared that he was more than ready to begin the recovery process.

The first challenge would be getting him to eat, as pelicans often will not eat in captivity. After trying a few options, Bobbie found that if she threw food to him, he would catch it in his beak, and then toss it back down his throat. This isn’t how pelicans eat in the wild, but it worked.

Once it was clear that he was willing to eat, caregivers got the pelican set up in a comfortable and appropriate place to recoup, with one caveat. 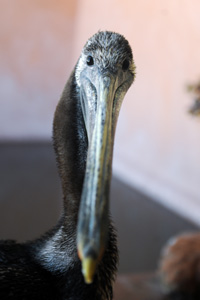 It’s important that the pelican’s recovery area is as natural as possible, and that he not spend too much time with people. As with all wildlife patients, the pelican can’t be treated as a pet, because to be successfully released, he must remain wild. At the present time, though, he seems to think his temporary digs are a pretty great place to recoup.

His room has a perfect small pool, with a step that allows him to get into shallow water. He likes to just sit by the side of the pool and gaze at the water, probably looking for fish, as he will one day when he’s back out in the wild. One side of the room is open to the air, while the rest of it is covered with strong netting to prevent him from getting out and others from getting in. A cool mist keeps him cool and comfy during hot summer days. And since arriving, he’s graduated to eating food from his water bowl.

When he’s ready, the pelican will move to an outside aviary for flight practice and acclimatization. Then, Arizona Game and Fish will help identify the best release site before he’s returned to the wild to make new pelican friends, survey the rivers and fly free in the open skies.

Find out about Wild Friends at Best Friends Animal Sanctuary