Image
People thought this reactive little dog was mean when he barked, lunged and bit, but he was just scared. Read more of his story.
By Christelle L. Del Prete

With his bed-head fur and disarming smile, Pikito is undeniably adorable. But as much as people oohed and aahed over his fuzzy little face, his demeanor wasn’t melting many hearts. He was a little dog struggling with some big behavior challenges and he needed help. That’s why, ending up at a Florida shelter, Pikito came to Best Friends Animal Sanctuary where he got love, understanding, training and, eventually, just the right home.

In the past, four-year-old Pikito’s small size and his cuteness worked against him. As is often the case with tiny, adorable dogs, people were always wanting to scoop him up, hold him or touch him. But Pikito wasn’t comfortable with that, and the people in his life didn’t seem to understand or listen to him when he tried to signal his discomfort. So Pikito was forced to get louder, and soon he was keeping people away from him by barking, lunging and biting.

As Dogtown behavior consultant Rebecca Woodruff explains, when a dog practices a behavior that works, the behavior is reinforced and it’s more likely the dog will repeat it. And the behaviors that had become habits for Pikito weren’t appealing to prospective adopters. The situation was obviously stressful for Pikito, too. 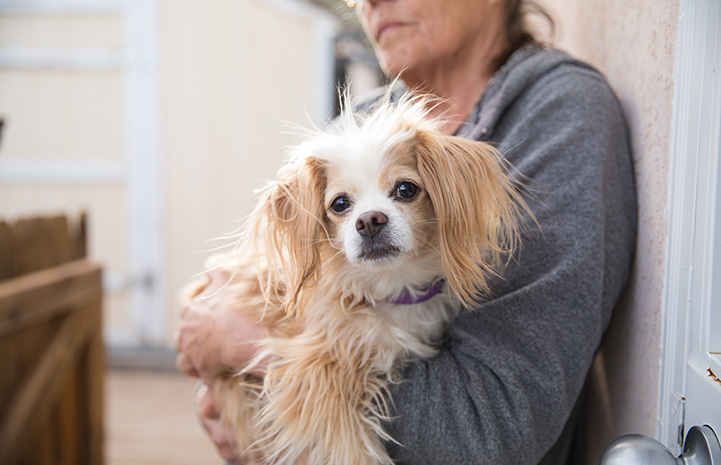 When Pikito arrived at Best Friends, Dogtown behavior consultant Melissa Pezzuto fostered him for two months before he moved to the Sanctuary. During that time, the little dog had a chance to decompress, come out of his shell and show more of his personality — including his fun and playful side. As Pikito began to open up in Melissa’s home, she and the other behavior consultants got to know him better. They recognized that he behaved the way he did because he was fearful and needed a soft touch. They also paid close attention to Pikito’s body language and figured out exactly what made him uncomfortable.

Eye contact frightened Pikito. He struggled to maintain his composure when there was a lot of commotion around him. He would get nervous whenever people entered his space (or when they left it) and he would bark and chase their heels. He also showed barrier reactivity, which upset him whenever he encountered someone while he was behind a fence or gate, or if someone approached him while he was in a crate. Pikito would also resource-guard. He would “protect” his toys or the people he liked from other dogs. Finally, he needed to brush up on his socialization skills with other dogs, because when he met them he was uncertain (and a bit rude).

By the time Pikito moved to the Sanctuary, Dogtown behavior consultants had put together a comprehensive plan for his caregivers to follow. It was a methodical, step-by-step plan that would help Pikito overcome one challenge at a time, in an order that would help him make progress.

At first, they allowed him to settle in and get comfortable, making sure he felt safe at the Sanctuary — his new home between homes. Then they started helping him feel more at ease around people and other dogs. The most important part of the plan was managing Pikito’s environment and interactions so he couldn’t practice any undesirable behaviors, such as chasing people and nipping at their heels.

Also important for Pikito was counter-conditioning training. That meant pairing something he didn’t like, such as a person walking into or out of his room, with something great, like a treat. Soon, he started to feel a lot better about being brushed, making eye contact with people and seeing people coming and going.

They worked on muzzle training, so Pikito could start to meet other dogs safely. It wasn’t long before he no longer needed the muzzle when meeting new dogs, and he began to play well with his canine roommates. His resource-guarding got better, too. The training helped four-year-old Pikito feel much better around people and other dogs. He even started to like being held. He was doing so much better. Now he just needed a home. 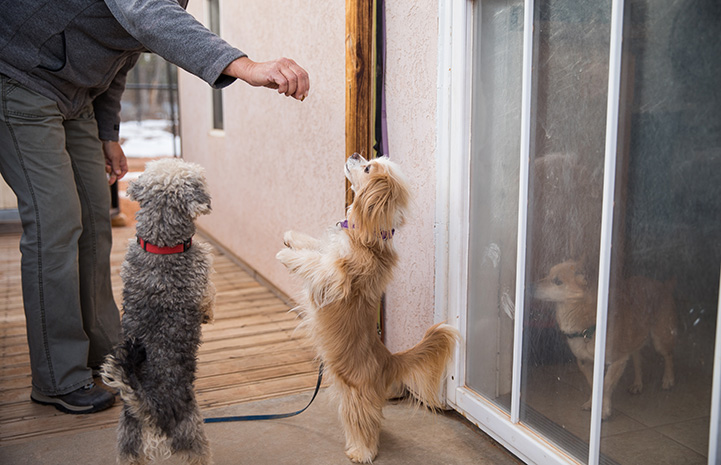 Even though Pikito had made miles of progress with his training, he would need a very special home with a person or family who could continue it. They’d also have to understand that even though he is tiny and adorable, he might never be a dog who easily makes friends with strangers.

Enter Helen Fletcher, who previously had adopted a dog named Finn who had a host of behavioral issues due to past abuse. After a couple of happy years with Helen and her family, Finn passed away early this year, and Helen later found Pikito on Petfinder.

“We wanted to find a dog who might have a hard time getting adopted,” she explains. “With our experience with Finn, we felt like we could provide a good home for a dog with challenges, but due to our home size he or she needed to be on the smaller size. We corresponded with Pikito’s caregivers at the Sanctuary and got to know him a little through videos and email.” 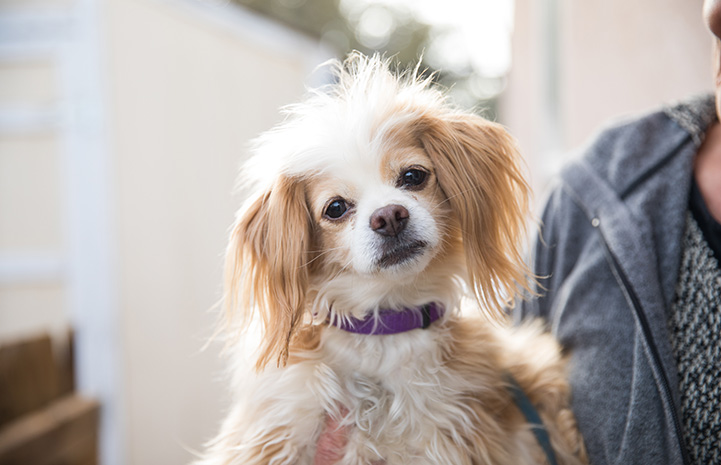 Then, Helen and her family traveled to the Sanctuary to meet Pikito and make sure he felt comfortable with them. It was a perfect match.

“They understood Pikito’s challenges and are prepared to manage him so that he won’t feel like he needs to show undesirable behaviors,” says Melissa. “They asked a lot of questions, and we were able to work with them over a month prior to them coming out to meet him. This gave us the chance to set them up with a lot of resources and information. Since bringing him home, they are letting him go at his own pace exploring his world and new family and making him feel safe.” 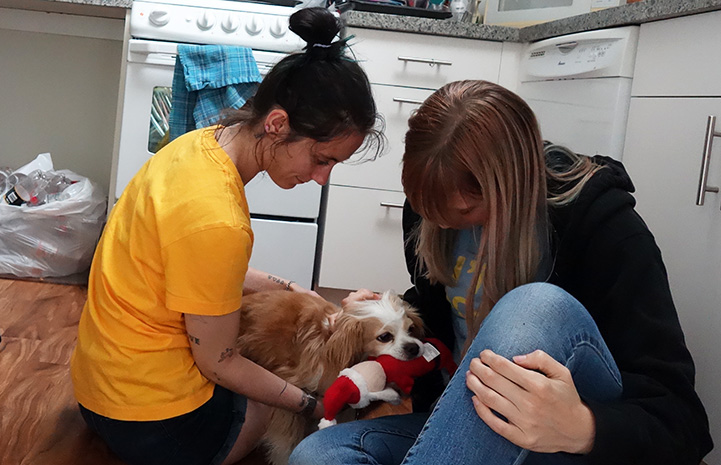 In less than a year, Pikito went from misunderstood in a shelter to a getting the TLC and training he needed to find a fantastic new home. And now that he’s finally in a home where he’s adored, Pikito is feeling just as good on the inside as he is cute on the outside. 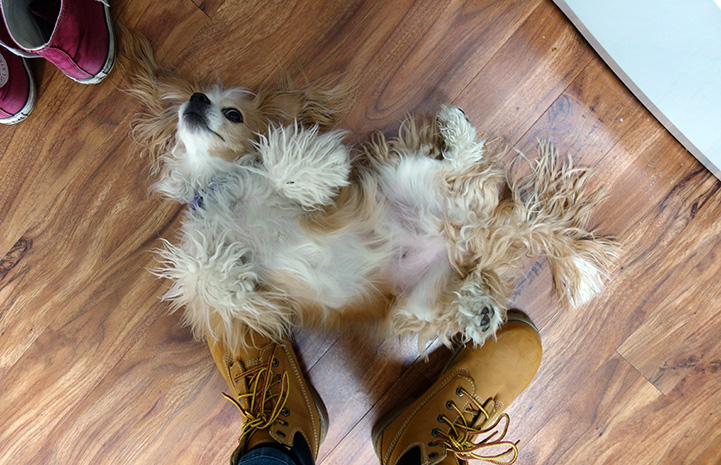 Photos by Sarah Ause Kichas and courtesy of Helen Fletcher