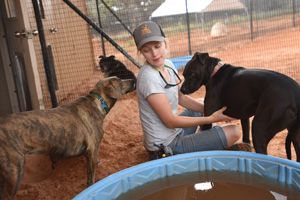 Chaplin and Cordelia prove the old adage that opposites attract. Both dogs have similar histories, having come to the Sanctuary from shelters where they’d run out of time. That’s where their similarities end, however. Cordelia, who’s pretty and petite, is a shy, shrinking violet while Chaplin is a big, muscular guy who is bold and boisterous. But even though their physical presences and personalities couldn’t be more different, they couldn’t possibly be more perfect pals.

Chaplin’s had some trouble making doggy friends in the past. It’s not that he’s unfriendly or aggressive in any way. He’s just a bit socially awkward. When he meets new dogs, instead of giving playful, friendly signals that he means no harm, his body tends to stiffen up and he crouches low to the ground. Most dogs don’t respond positively to that, so when he first arrived at Best Friends, Dogtown caregivers knew they couldn’t pair him up with just anyone. It was safer to house him alone, but that was only a temporary solution.

Having a friend would not only mean more fun for Chaplin, it would also give him a better chance at finding a forever home, since many potential adopters already have dogs at home. Sanctuary staff knew Chaplin could have a friend and roommate if he could just get past the introduction phase. So, they set out to find a dog who’d be OK with his initial awkwardness.

That dog turned out to be Cordelia. Because she is scared of new dogs when she first meets them, she didn’t see Chaplin as strange or different. He was just another dog she would have to put aside her fears to get to know. Chaplin made it easy for her by ignoring her at first. That made Cordelia more curious and brave. Pretty soon, she was following him around. 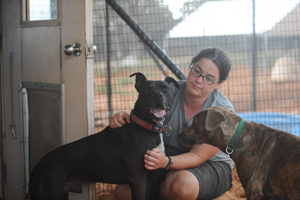 Now, Cordelia has become a devoted friend to Chaplin, and Chaplin has become a big brother figure to her. Always braver and bolder when he’s around, Cordelia follows his lead and mimics him whenever she faces something new. Because she’s shy, being petted by people has been hard for her. But Chaplin loves affection and seeing him getting love has made her less timid about getting love and pets from people.

Because Cordelia is always really excited to do whatever her “big brother” is doing, her caregivers are working on having her follow him up onto a golf cart. Golf cart rides are a favorite pastime in Dogtown, but some dogs, like Cordelia, are afraid of them at first. Chaplin, however, rides like a pro and is helping Cordelia take the first step to enjoying a ride herself.

As for Chaplin, he’s gone from having no four-legged friends to having a loyal sidekick. Cordelia has helped him prove he can coexist peacefully with the right canine counterpart. Now, both dogs have not only gained skills that will help them find homes where they can happily live and make friends with other dogs, they’ve also gained a pretty sweet friendship while they wait.