Image
Akila's new family loves her for exactly who she is, while encouraging her to explore new things - like treats!
By Best Friends Animal Society
By David Dickson

Some animals have to do nothing more than bat their eyelashes at adoption events in order to draw a crowd. The adorable puppy, whose tail is wagging so quickly it’s a wonder he doesn’t take flight, never seems to have a hard time meeting people. Neither does the adorable kitten purring and rubbing up against the cage, nor the two-year-old Lab mix with the thousand-dollar smile and impeccable manners.

These are the types of animals who know how to attract the masses. And, well, they tend to find homes easily, all things considered. Not that that’s a bad thing!

On the other side of the fence, though, there are some animals who can go much longer waiting for a home, no matter how many adoption events they attend. Animals with behavior or medical challenges, for example. Lucky thing, then, that there are still people willing to open up their hearts and homes, even when it takes some extra work.

Akila the dog and her new family are one such success story. 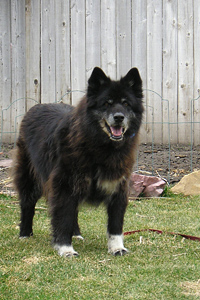 Ten years ago, Akila came to Best Friends from another rescue. She was such a shy girl that if a stranger even tried to pet her, Akila would scurry away to the far corner of her play area. Akila would much rather sit back and watch the world from a safe distance. As you can imagine, it’s not every person who would choose to bring home such a dog.

But Bret and Stacey Chappell from Salt Lake City, Utah, were not looking for an easy dog. They found Akila in the Best Friends magazine. Their heart went out to this "fuzzy beast" of a dog, as they affectionately call her, who had been waiting so long for a home. Once they contacted Best Friends and learned more about Akila, and how shy she can truly be, they knew she needed them all the more. "I have a soft spot for dogs who need you more than others," Stacey explains. They decided to adopt.

The trip back home from adopting Akila at Best Friends was relatively uneventful, other than the funny time when they stopped alongside a Greyhound bus. Several passengers thought Stacey and Bret had a small bear in the car with them! It wasn’t until they got home that the real work began. 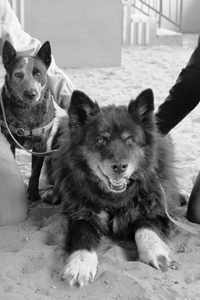 With Akila, the little things are huge.

Akila had never lived in a home before. She didn’t know what to make of things. She got along fine with the two other dogs in the family (both rescues), but beyond that, she was out of sorts with the whole concept. In the very beginning, she would howl all night long. Plus, Bret and Stacey had a mountain of mud to clean up on a daily basis. Per instructions from Best Friends, they left a drag lead on Akila, which she would promptly pull through every spot in the yard that had mud, and then she’d drag it all around the house.

"She didn’t respond like other dogs respond," Stacey says. They couldn’t reward her with affection because she didn’t want to be touched. They couldn’t offer her treats because Akila was too nervous to accept a treat from a person. The only thing they could do was give her the space she needed, and keep working slowly.

With Akila, as with many other shy animals, progress has not been a steady upward climb. She goes forward a little, then back a little. Overall, however, she’s getting more and more trusting.

It could easily have gone the other way. Akila might have hidden in the shadows the rest of her life, despite all they did to try and earn her trust. And that would have been Akila’s choice. Kristi points out that people who adopt a special-needs animal have to understand what they’re getting into. "It takes time, patience and realizing the animal may or may not change."

For Akila, though, it looks as if she’s truly decided to give this whole family thing a solid effort. She might not be ready to hop into laps any time soon, yet she’s finding her way. In at least one area, Akila has proven she can learn to change her thinking entirely. She’s no longer afraid whatsoever of taking treats. In fact, she’s become so fascinated with goodies that she has been known to snitch food right off their dinner plates when Bret and Stacey are not watching. Oh, such wonders of indoor living that Akila never guessed at before!

"She really likes being inside," says Stacey. "She’s adapting to a home."

Adopt! There are companion animals of every size and temperament at the Sanctuary – check out our Adorable Adoptables to see if there’s a love match waiting for you.

Show your support! You can help create even more happy endings for animals that might have been considered "unadoptable" elsewhere by giving to Best Friends.

Training resources! You can teach an old or young dog new tricks. Check out our dog training resources for tips, tricks and games that you can play to help build a better relationship with your favorite pooch.

Photographs courtesy of the Chappell family