Pet allergies: In sickness and in health

Image
What should you do if you're allergic to your cat, dog, bird or other pet? This article gives advice and tips so you can avoid giving up your animal.
By Maryann Mott

Jessica Skopac suffers from a lifelong allergy to pets, waking up each morning sneezing with itchy, watery eyes and hives. Even so, it hasn’t stopped her from living with two cats and two dogs, and regularly fostering four to six other animals in her home in Baltimore, Maryland.

Over the years, several doctors have told Skopac, 30, to rid her home of pets, but she balks at the suggestion. "My allergies are really annoying," she says, "but it’s a small price to pay for the joy animals bring to my life."

Living with pets when you're allergic

Living with both allergies and pets is possible, doctors say, by better managing indoor environments, and, in some cases, taking prescription medications to control flare-ups. In fact, according to the American Academy of Allergy, Asthma & Immunology (AAAAI), nearly 10 million people choose to share their homes with cats and dogs even if it means enduring regular bouts of congestion, coughing and red, itchy eyes.

Why some people are allergic to pets while others, even those living in the same house, aren’t affected isn’t entirely known. "That’s the $50 billion question," says Wallace.

Family history, however, does play a part in why some immune systems are supersensitive to the otherwise harmless allergen proteins found in animal saliva and dander. Wallace points out that if one parent has allergies, there’s a 30 percent chance his or her child will, too. If both parents are allergen-sensitive, the odds increase to 70 percent, but the specific allergen is not necessarily passed down. So, if your father is allergic to cats, for example, you might be fine around felines but sensitive to something entirely different, like dust or dogs.

Children usually start exhibiting allergy symptoms between ages two and five, says Wallace. Allergies may also start, or stop, she says, after a major event in a person’s life, such as battling a severe infection or experiencing a hormonal imbalance.

Developing a tolerance to your own pets 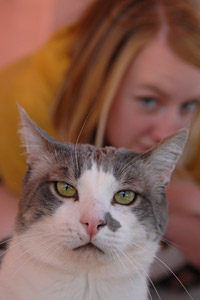 Is your furry companion making you sneeze?

She says some pet-allergic people develop a tolerance to the animals they live with on a daily basis. But if the person moves out of the house — say, for example, a teenager going to college — and then comes back to visit, he or she suddenly finds it difficult to be around the same pet. That’s because the body thinks it’s a new exposure and reacts violently by producing more symptoms.

No hypo-allergenic breeds of dogs or cats

Contrary to popular belief, research has shown there are no hypo-allergenic breeds. All dogs and cats produce potentially troubling proteins in their salivary and sebaceous (skin) glands that trigger allergies in some people. These allergens are then deposited on an animal’s coat through self-grooming, or dead skin (dander) falls off the body like autumn leaves, sticking to walls, carpets and clothing. Allergens are also present in dog and cat urine, although it’s not the same allergen found on the skin and in the saliva, says Wallace, and hasn’t been as well researched.

Some animals do make more of the allergy-inducing proteins in their bodies than others. For example, studies show that levels of Fel d1 (a protein that commonly causes allergic reactions in people) are much higher in male cats than in females. Researchers discovered, though, that neutering reduces the amount of allergen produced to the same levels found in females.

Although most people seem to instinctively know if they’re allergic to pets, a skin prick test done at a doctor’s office (with results in as little as 15 minutes) can confirm it. For people with mild to moderate allergies, controlling aggravating flare-ups requires making some lifestyle changes.

Making several changes is necessary for the best results. "What most of the studies are pointing to now is that there will never be any one thing that you can do to reduce the symptoms produced by indoor allergens," Wallace says. "But if you do multiple things at once, you have a fairly good chance of at least reducing symptoms."

However, regularly bathing pets — something many allergic people do to get rid of dander — won’t provide a long-lasting reprieve from annoying symptoms. Wallace says studies show that bathing a pet only provides short-term relief by removing allergens for a period of time ranging from a few hours to a few days.

There’s also little evidence, doctors say, that allergies can be combated by using a HEPA vacuum (which has a high-efficiency particulate air filter), steam-cleaning carpet and upholstery, giving pets oral agents such as acepromazine (which has side effects such as low blood pressure and cardiac rate abnormalities), or applying topical sprays or coat conditioners to reduce shedding.

Depending on their symptoms, people can get temporary relief from prescription nasal sprays, eye drops or pills. A newer treatment option for allergy sufferers is rush (also called cluster) immunotherapy, which gets patients up to a maintenance level faster than traditional immunotherapy. Done at a doctor’s office, the treatment involves administering a series of shots to boost the body’s tolerance of the offending allergen to provide permanent symptom relief.

Wallace says most of her clients are willing to take the allergy shots or modify their homes and habits rather than give up their pets. "I can count on two hands the number of patients during my 30 years of practice who’ve voluntarily said, ‘I will give up my pet,’" she recalls. "They would much rather change allergists than give away their cat or dog."

Get info on choosing a pet