Pets and veterans: Saving each other

Image
Former stray German shepherd who ended up in the shelter goes on to become a working service therapy dog who is helping a veteran home from war.
By Christina Green

One came into the shelter, wounded and shut down. The other came home from war in a similar state. But after a chance crossing of paths at Best Friends’ NKLA Pet Adoption Center in Los Angeles, Samson and his new person, Doug Smith, recognized their shared pasts and are now overcoming obstacles together. Today, Samson is one of many working service dogs trained to help U.S. military veterans, and he’s helping Doug transition from war zone to civilian life. 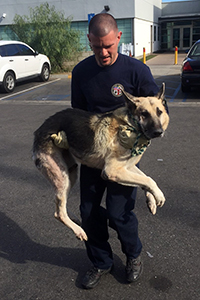 German shepherds are known as strong, majestic, loyal dogs. But when Samson arrived at a Los Angeles Animal Services shelter as a stray, he was filthy, underweight and covered in wounds.

But that wasn’t even the worst of it, as Labs and Friends, a member of the Best Friends No-Kill Los Angeles Coalition discovered. NKLA Coalition partners pledge to help end the killing of dogs and cats in L.A. city shelters. So Labs and Friends.Org frequently travels to shelters to take in dogs and cats needing extra help. And Samson certainly fit that description.

“When I arrived to pick him up, a staff member had to carry him out,” says Lotta Nilsson, who volunteers both with Labs and Friends.Org and at the NKLA center. “He laid him on the pavement by my car, and Samson just laid there, no willpower to stand. I was almost in tears.”

A dog's healing and recovery

Lotta lifted Samson into her car, and that marked the beginning of a new life for him. Though his wounds had already been treated at the shelter, she got him to a vet to check him again to make sure he was OK. Once he was cleared to go to the NKLA center, staff there helped Lotta pick gravel out of his fur. The down-on-his-luck dog was finally getting TLC from everyone he met, and that began the healing of his physical wounds.

His soul’s wounds, however, would need more than a bandage.

“When he saw a leash, he became very afraid and would run to the back of the kennel,” says Katie O'Shaughnessy, lead pet caregiver at the NKLA center. Undaunted, the staff resolved to help Samson.

Katie says, “Caregivers worked very hard with Samson to build confidence. We slowly helped him get more comfortable on the leash and got him to walk around on his own within a couple weeks.” While Best Friends staff and volunteers take care of all pets at the NKLA center, Lotta went to the center every day to work with Samson, too. All the care and attention began to help.

Learn more about what Best Friends is doing to help L.A. become no-kill

While Samson was regaining his trust in people, Hounds and Heroes, another NKLA Coalition partner, was helping U.S. Marine veteran Doug Smith choose a therapy dog. The process began when Doug admitted to himself and his doctors that something was wrong. He had survived an explosion in Afghanistan in 2013. His acute physical wounds had healed. Under the surface, however, he had been quietly battling an invisible enemy that made ordinary life extraordinarily hard — post traumatic stress disorder (PTSD). It was determined that a therapy dog could be a great help, and that’s how Hounds and Heroes got involved to find the right dog for Doug.

Hounds and Heroes covers all associated costs with adoption, as well as PTSD service dog training and lifetime care of every dog entering its program.

“We pay for every vet bill, for pet insurance, food, and even the dog bed,” says Bonnie-Jill Laflin, founder and CEO of Hounds and Heroes. “Military veterans incur no cost through our program throughout the entire time they’re together, to make it as easy as possible for them.”

Most veterans let Hounds and Heroes choose and train the dog for them so the dogs are ready to go as soon as they meet. But Doug is an experienced dog handler and wanted to be more hands-on. Bonnie-Jill encouraged him to head over to the NKLA center to meet a few canine candidates face-to-face.

Instant connection between vet and dog 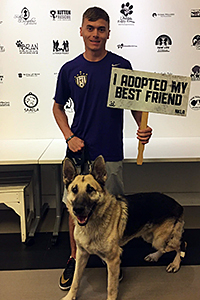 On the day Doug went to the NKLA center to look around, other German shepherds were there. But it was Samson’s eyes that his eyes and heart locked in on.

“I had met four other dogs and there was maybe one I thought could be good,” says Doug, “but then Samson came in and I knew right away.”

The work Lotta and others at the center had been doing with Samson paid off. Doug was impressed with how well Samson stayed by his side on leash. By then, Samson was also holding his head much higher and, most notably, surveying the environment. That last characteristic is what drew Doug’s attention. Knowing there’s someone who is watching your back proved to be a huge help for him, even before actual therapy dog training began.

“When no one’s around, I’m on edge,” says Doug, who endures seizures, frequent headaches, vivid nightmares about combat and, at times, even black-outs. “But just having Samson around makes me more comfortable and relaxed.”

Labs and Friends.Org was so moved by the instant friendship that Samson’s adoption fee was waived.

“It was our small way of saying thanks to the troops for all they do for us,” says Julie Jones, founder of Labs and Friends.Org. “We wouldn’t have a free country if it weren’t for veterans, so we just wanted to do something.”

The importance of service animals for veterans

“So many veterans get paired up with a dog and then tell me that it has saved their life,” she says. “The suicide rate for veterans is now 22 per day, so not only are you saving a dog’s life who would have been euthanized at the shelter, but you’re also saving a hero’s life.”

While that may seem like an obvious win-win situation, Bonnie-Jill says it still takes teamwork among rescue groups and shelters.

“Best Friends has been such a great help with all of the NKLA Coalition partners,” she says. “Everyone’s been so helpful and just phenomenal the way they handled this situation. It was a total team effort.”

Photos courtesy of Hounds and Heroes and Lotta Nilsson