Although Ori’s already climbed up the set of carpeted steps a few times, he knows he’ll get a reward if he does it once more. Local volunteers Wendi and Ed Paschal shower him with praise as he reaches the top step and licks some baby food from a small plastic spoon.

This simple exercise — stair climbing — is one part of Ori’s weekly physical therapy (PT) sessions with Wendi and Ed. The sessions help make him stronger, healthier and happier.

What is Manx syndrome?

Ori was born with Manx syndrome — a condition that affects some Manx cats who carry the gene for shortened or “bobbed” tails. These adorable little nubbin tails are part of what makes Manx cats unique.

What’s not so cute is the fact that since a cat's tail is part of its spine, the same gene that shortens a Manx cat’s tail also sometimes shortens its entire back end. Manx syndrome means that the cat’s spine, organs and muscles don’t develop properly, which can lead to some challenges for cats afflicted with it. But at the Sanctuary, there’s plenty of help for Ori. 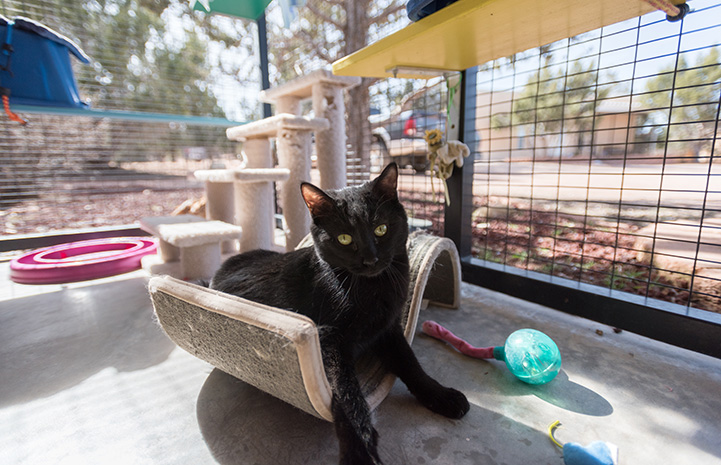 Physical therapy exercises for a cat

While there is no cure for Manx syndrome, many Sanctuary cats, including those with symptoms like Ori’s, have benefited greatly from physical therapy. So three-year-old Ori started his physical therapy journey a few months ago, and now he’s climbing, standing, walking and being massaged to his very best self.

While he’s doing the stair climbing exercises, Wendi guides him with a spoonful of baby food, and Ed places his hands gently on Ori’s back end and sways him from side to side.

“I sway him so he has to use his muscles to steady himself, and that way he gets stronger,” says Ed, who constantly keeps his hands on or close to Ori so he can catch him if he falls. But Ori’s got this down — and up. He completes his stair-climbing exercise like a pro and with little help. 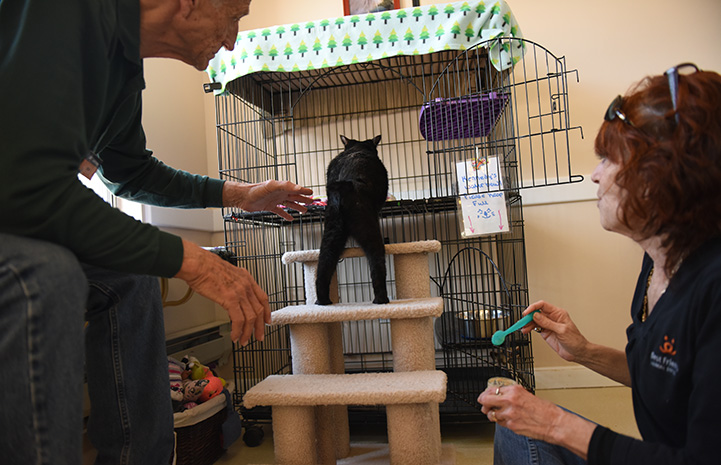 Will walk for treats

When the weather is nice, Wendi and Ed take Ori outside on a harness and leash, so he can build up his muscles walking in the soft sand. When it’s cold or wet outside, Ori practices in a hallway of the building where he lives. Ed sits with Ori on one end of the hallway, and Wendi sits at the other with the jar of baby food and the spoon. Wendi calls him over and Ori hop-walks toward her as fast as he can go.

In a recent session, Ori took 15 steps. He stumbled a bit but did not fall. “He seems steadier and less wobbly since he started the PT,” Ed says proudly, giving Ori a rewarding chin scratch when he ambles back over to him.

The session is nearly over, and even though Ori is tired, it’s clear he doesn’t want it to end. “He’s really into the therapy,” Wendi says. 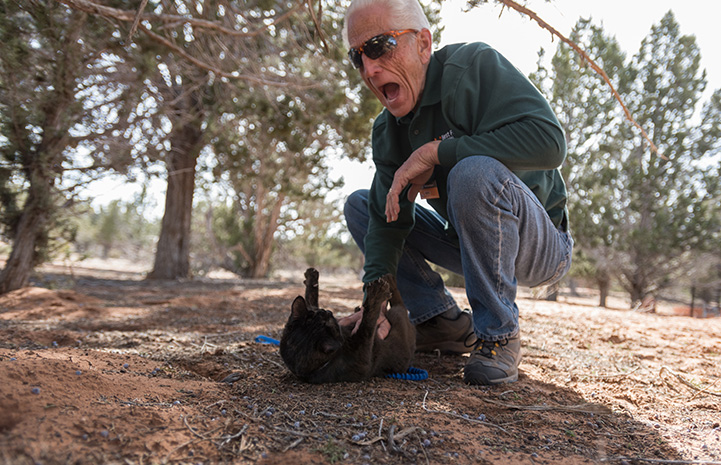 It’s the last part of the therapy session that may be the best. Ori lies on his back either outside on the soft ground or inside on a blanket or towel. Then he lets Wendi “bicycle” his back legs, taking him gently through his full range of motion. After that, Ori gets a nice massage on the triceps of his front legs, since they work extra hard to support him throughout the day.

Ori’s not the kind of cat to turn down a massage after a good workout. While his PT is helping to make him stronger and more mobile, all the extra one-on-one time, praise, massages and yummy treats are helping him stay motivated ― so climbing that extra stair or taking some extra steps is worth it. 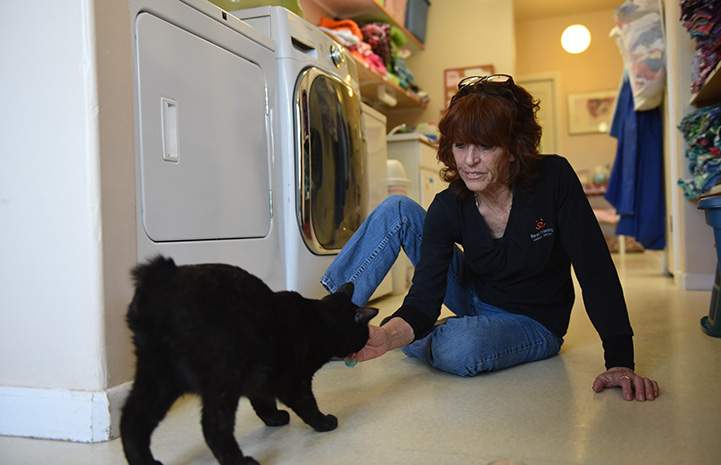