Image
Choosy cockatoo, who gives the cold shoulder to most people he meets, finally picks his person. She adopts him, and he now has a new home.
By Christelle L. Del Prete 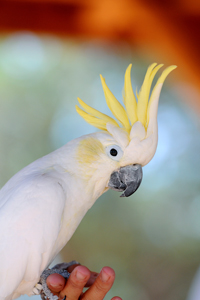 Maybe Angel could sense that Cassandra had lost someone she loved. It doesn’t matter that Angel is a bird and Cassandra is a person. Something about her made the ultra-choosy bird decide that of all the people he’d met in his five years of living at Best Friends, Cassandra was the one for him.

Bird who gives the cold shoulder

Angel is a good bird, but the handsome cockatoo is, let’s say, “selective.” When he really likes someone, he’s truly angelic, showing the sweet, loving side of his personality. But when he doesn’t like someone, he’s been known to jump on people’s backs and thump them on the neck with his beak. Since Angel arrived at the Sanctuary, the idea has been to find him a great new home. However, he’s so choosy that it can take him years to make a new friend.

Angel’s caregivers never stopped believing it would someday happen for him, but for a while, it seemed that he’d never choose a new person. And he made it abundantly clear he wasn’t going home with anyone he didn’t approve of 100 percent. For years, he gave potential new friends the cold shoulder.

Then one day he met a volunteer from Florida named Cassandra, who had recently lost the love of her life (a bird named Mango) in a tragic accident. Volunteering at the Sanctuary was one of the things she was doing to honor Mango’s memory and to ease her heartache. She knew she’d someday welcome another bird into her life, but she had no intention of adopting one during this trip.

Angel, however, took one look at Cassandra and decided she was the one. While Cassandra was touring the cockatoo house with a caregiver, he jumped onto her shoulder like he’d been waiting for her to walk into his life. Cassandra says, “I looked at him and knew he had chosen me. After all of those who he had encountered during his five years at Best Friends, he picked me as his special person. All I had to do was say yes.”

Settling into his new home 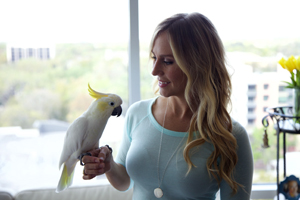 There was only one hiccup in the plan. Cassandra needed to return to Florida first to prepare her home for another bird. Angel would have to follow her once she was ready for him. It turns out, he was in luck. Best Friends staffer Wendy Kaplan, who was at the Sanctuary, would soon be returning to her home in Florida.

Angel must have known that this was his free ticket home, because when he met Wendy, he was on his best behavior. As he left the Sanctuary, Angel called out “Bye-bye, Angel, bye-bye,” as if he knew he was going to his forever home. Soon, Angel was on a plane bound for Florida, where Cassandra met him at the airport.

It was a joyful reunion. Angel had waited years for the right person, and, now that he’d found her, he couldn’t wait to show how happy he was about it.

“It took him no time at all to feel right at home here,” Cassandra says. “He happily snuggles up with my boyfriend and me each evening to watch TV and he fills each day with his sweet, charismatic chatter. He is just a complete joy to be around each and every day. I feel so blessed to be able to say, ‘Angel, you have found your forever home.’”

To help more animals like Angel go from homeless to home, become a Best Friends member.

Learn more about the Parrot Garden.