Image
Story of a pit bull terrier mix who had a rough start in life but now is getting extra special care and help, and has a much brighter, happier future.
By  Christelle L. Del Prete 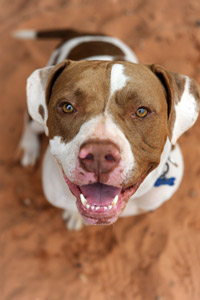 “He makes you smile every single time (you see him),” says Dogtown caregiver Jacquie Bushway-Spear. And she’s right: Pepsi, a pit bull terrier and bassett hound mix has obviously inherited the most adorable physical characteristics of both breeds. A white dog with brown patches, he’s built thick and low to the ground, with a big head and an even bigger smile. His front legs are bowed, and his big ears flop back when he runs. But the best thing about Pepsi is his personality, which, like the soft drink he’s named after, is positively bubbly.

The first four years of Pepsi’s life weren’t so sweet. He got passed from person to person, and at one point he was in danger of being killed. Fortunately, a good Samaritan came to his rescue, but she couldn’t keep him. The local shelter in Ivins, Utah, was full and couldn’t take him, either. Pepsi had nowhere to go, and his future wasn’t looking so bright – until he came to the Sanctuary.

Pepsi now lives at Maggie’s, a building in Dogtown, where caregivers, including Jacquie, have helped him with some behavioral issues (a tendency to dart through doors the second they open and some crankiness with other dogs). But Pepsi is a smart and agreeable dog. He’s stopped his door-dashing and has enjoyed some play dates with other dogs. He’s learning good manners, too; it helps that he’s food motivated and loves enrichment games, such as food puzzles.

He’s got to watch his weight; Pepsi has degenerative joint disease and arthritis in his front legs. But that doesn’t stop him from flying at the end of a leash (hence earning himself the nickname “Captain Pepsi”). The only thing that will stop him in his tracks is people. He’s so interested in making new friends that he will take any opportunity he can to meet them. 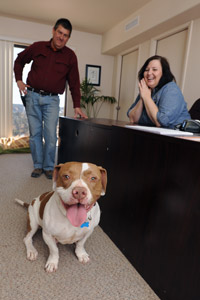 Pepsi’s got personality galore and a genuine desire to please people. He’s so social that Jacquie brings him outside to meet visitors on Sanctuary tours, and he often goes on sleepovers with families. On Thursdays, he goes to the human resources office to spend the day as an office dog. He enjoys napping on the couch there and has even been caught snoring a time or two. Overall, this once down-on-his-luck dog has become an excellent ambassador for pit bull terriers and pit-bull-terrier-like dogs everywhere.

In the process, he’s won himself a cadre of loyal fans, including local volunteer Justyne Moore, who takes him on car rides and outings. “How can you not fall in love with Pepsi?” she asks, describing how he sniffs around and kicks up his heels in the grass. “He is the absolute cutest with his big smile, and the twinkle in his eyes,” she adds.

Fans from near and far

One thing’s for certain: When Pepsi finds a home, he’ll likely receive a collective cheer from his many friends and fans. The Best Friends Animal Society – National Volunteers page on Facebook is frequented by adoring Pepsi fans. Wendy Dapore posted, “I spent lots of time with Pepsi while working at Maggie's. ... We had him for a sleepover and even took him with us to supper! He was the best behaved boy and is a joy to be around!” Kara Olsen agrees: “Pepsi is the best! He was one of my favourite sleepover buddies, and I loved working with him at Maggie’s.”

Sam Catford, who visited the Sanctuary from Australia, writes, “Walking Pepsi was such a joy, and his lust for life is beautiful.” Perhaps that’s why people just can’t seem to get enough Pepsi in their lives.

Get more information about Pepsi and other adoptable dogs at the Sanctuary.