Image
Black pit bull terrier rescued from Hurricane Katrina was reactive around other dogs, but she can now get along with multiple dogs at once.
By David Dickson

Batgirl the black pit bull terrier came to Best Friends after being rescued from Hurricane Katrina. One thing Batgirl made abundantly clear from the beginning: She didn’t want to be around other dogs. At least, that’s what she wanted everybody to think.

She reacted on leash whenever another dog came by. She also reacted through the fence. Her signals to other dogs were crystal clear: "Back off!" Caregivers and trainers decided that, for safety, she needed to live alone. 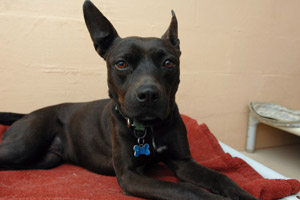 Though she didn’t want to be around dogs, she enjoyed spending time with people. "She loves people," explains caregiver Erin Schmitz. "Everyone who takes her on sleepovers just adores her." For years, people have been taking this lovable gal on sleepovers to get to know her. No doubt at least a few of them wished she could get along with other dogs so they could adopt her.

Caregivers and trainers decided it was time to find out if there was any way at all Batgirl’s dislike of other dogs could be remedied.

Making friends with other dogs

Caregivers chose Coleman, an older puppy with terrific dog skills, to test the waters with Batgirl. Turns out they picked a perfect first dog for Batgirl to get to know. "She loved him," says Erin. Batgirl and Coleman stayed together as roomies for some time, until he was adopted. 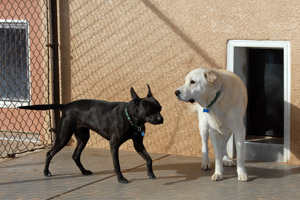 Zoraster is a good match for Batgirl.

Batgirl’s caregivers wanted to keep things rolling. "We started adding other young, playful dogs with really good dog skills," explains Erin. Time after time, Batgirl did phenomenal with all of them. She was making friends right and left. Was this the same dog? Batgirl’s dog skills have improved so much that she’s now quite flexible with roommates. Even though she prefers males, for example, she’s currently living successfully with two females. "We love her," says Erin.

Getting along with multiple dogs at once 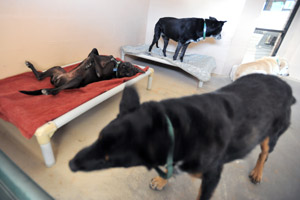 To sum up, here’s a dog who used to be off limits with other dogs. Now, thanks to careful efforts over time from loving caregivers and trainers, she can get along with multiple dogs at once. If that doesn’t prove we can all change for the better, what does? "She just wants a big, fluffy bed to sleep on," says Erin.

Now, then, if you took Batgirl on a sleepover in the early years, fell in love, but didn’t adopt because you have dogs at home, do you feel up for a reunion?

Interested in meeting Batgirl or another animal for adoption from Best Friends? Check out the many wonderful adoptable animals.