Jax, a tiny reddish brown Chihuahua, tears around the grass at Paradise Ranch with his big pink tongue lolling out. He stops briefly to lick a volunteer’s hand and then is off again to tackle a tennis ball the size of his head.

Lauralea Oliver, animal assessment/transport specialist at the Best Friends Pet Adoption and Spay/Neuter Center, points at him and says, “He’s one of our shy dogs. Today is the first day I was able to put a collar on him; he normally hides in his cubby.”

Around him, 18 other small dogs splash through pools, roll in the grass, and frolic like kindergartners at recess. Even though they’re living large for the moment, each one of them is a homeless dog waiting for that special someone to come along and pick them. And their day at the park is designed to help them get there. 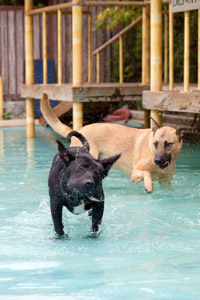 Several months ago when Paradise Ranch, a local dog boarding/training/day care facility, asked how they could help the Best Friends Pet Adoption and Spay/Neuter Center, Lauralea seized the opportunity. She says, “I told them it would be cool if we could come here and use the space for some off-site playgroups for our dogs. I was thinking it would be great if they’d let us do it maybe once a month. The owner came back and said we could come every week!”

Since then, every Tuesday Lauralea drives dogs from the Best Friends Pet Adoption and Spay/Neuter Center to Paradise Ranch. For two hours, they don’t have to feel like unwanted pets who lost their homes, or never had a home to begin with.

More than just fun and games

The time spent playing each week is much more than a field trip. Paradise Ranch’s generous donation of space each week is valuable because the dogs can play in groups. Mike Harmon, manager at the Best Friends Pet Adoption and Spay/Neuter Center, explains, “Playgroups are valuable in a shelter environment because they increase the dogs’ adoptability.” And that’s what it’s all about.

Dogs who get regular exercise and a chance to socialize with other dogs are happier and calmer. While that’s true for all dogs, Mike says it’s even more important for dogs living in a shelter environment because it reduces problems like jumping up or spinning in circles in their kennels, which can happen if dogs are frustrated from being cooped up in a kennel too long. Also, because dogs tend to let loose and show their true personalities when playing with others in a group, Mike explains, “We can be more knowledgeable about the dogs, which helps us better match them up with potential adopters.” When people can see the dogs in a setting more natural than a kennel — something that looks more like a bunch of pet dogs running around in a backyard or at a dog park, they are more likely to be adopted. Mike adds, “They’re seeing the dogs in a better environment. It’s a perspective you just don’t see when looking at a dog in its kennel.” 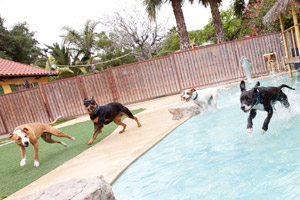 Plans are underway to expand the playgroup program this winter far beyond what’s already been made possible by Paradise Ranch. To that end, in December the adoption center will welcome dog trainer Aimee Sadler for a four-day workshop about implementing daily playgroups right at the Best Friends Pet Adoption and Spay/Neuter Center. Mike says, “Aimee is known for designing playgroups in a shelter environment and instituting them as a daily routine.” He adds, “The great thing about her program is that it’s really designed to be run by volunteers, so it’s a sustainable model. Right now, we’re not able to do this for our whole population of dogs on a daily basis.” Soon, all the dogs at the adoption center will get to play like the 18 little ones living it up at Paradise Ranch this particular morning.

By the end of two hours, the little dogs, tuckered out from romping and swimming, have slowed down. Some are already out cold, sunning themselves in the warm grass. They will arrive back at the adoption center ready for dinner and more naps. And there’s a good chance that the next time someone stops in front of Jax’s kennel, instead of hiding, he might just wonder whether it’s time for another trip to paradise — maybe this time to a forever home.

For more information about Paradise Ranch, visit their website.

Check out the dogs and cats looking for homes from the Best Friends Pet Adoption and Spay/Neuter Center.