Image
Boxer mix with pancytopenia and other medical issues gets blood transfusion from pointer mix after ingesting a toy.
By Christelle L. Del Prete

Sweetie was in a precarious position. Her person had surrendered her, she was severely anemic, and she was running out of time at a shelter in Albuquerque, New Mexico. When the shelter found her a foster home, it seemed she would be saved, but the family's other dog did not accept Sweetie. She couldn't stay with them, but if she went back to the shelter, this sweet boxer mix would almost certainly have been killed. To save Sweetie, the shelter reached out to Best Friends. 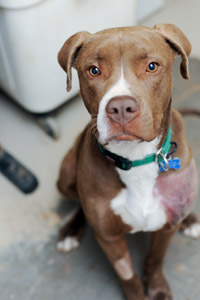 Sweetie's new caregivers at the Sanctuary knew she was anemic, but she hadn't been in Dogtown very long before they realized her medical problems were much more serious than that. One morning, while Sweetie was in her run, she started bleeding profusely. She was rushed to the clinic, where the veterinary staff diagnosed the immediate problem: a hematoma (an abnormal buildup of blood outside of a blood vessel) in her right eye. Things were complicated because her anemia was far more severe than originally thought, and, once she started bleeding, she didn't stop.

Surgery was too risky for Sweetie. Her eye problem had to be treated with drops. And then came a battery of tests. The diagnosis was grave: pancytopenia, a disorder in which the bone marrow does not work to make enough red blood cells, white blood cells, or platelets. There is no cure, and, because Sweetie's cell levels are so low, a small injury or cut that would be considered minor for a normal, healthy dog could be fatal for her.

For caregivers Haven Diaz and Deb Turner, this meant that they had to be especially careful with, and protective of, Sweetie. They tried to carve out a quiet life for her in Dogtown, and set up some tough but necessary restrictions. She can't, for example, play with other dogs even though she loves them. Luckily, however, she loves people as well and has bonded with her caregivers, who were optimistic about her condition until yet another roadblock to Sweetie's health occurred. 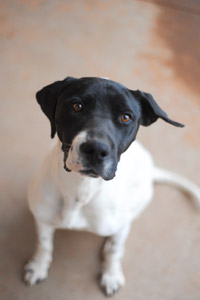 One Saturday afternoon, Sweetie ingested a toy. The pieces caused internal injuries, and, while most dogs have a fairly good chance of surviving this type of trauma with immediate veterinary care, Sweetie's underlying condition put her at extremely high risk. She lost so much blood that she needed a donor, and she needed one fast.

Enter Miller, a pointer mix, who also lives in Dogtown. Miller, who is about a year and a half old, spent most of his puppyhood tied up in a yard. Like Sweetie, his person also surrendered him, claiming he had tried to chase the neighbor's small dogs. But for a young, strong boy with lots of energy, Miller is very well behaved, with a gentle spirit and a calming presence. Volunteers who have taken Miller on outings have praised him for his wonderful personality.

It was this characteristic strength and calmness (as well as his size and good health) that made the veterinary staff consider him when Sweetie needed her emergency blood transfusion. Miller stepped up to the task like they knew he would. Thanks to him, Sweetie survived her crisis. And, though her overall prognosis is guarded, given her ongoing condition, she is currently stable and comfortable. As for Miller, he is back to feeling like his strong, young self again. He may not realize what an amazing thing he's done, or what a strong connection he's made to one of Dogtown's most vulnerable residents, but no one who knows either of these dogs is likely to forget it.

For more information about Sweetie, Miller, or any of our other adoptable dogs, click here.