Power of the herd

Image
A budding friendship among three goats promises great benefits for them all.
By Best Friends Animal Society
By David Dickson

It’s nice to have friends who are good at something you’re trying to learn. That is, as long as they’re willing to share a few tips now and then. For a group of three new goats at Best Friends, they have a lot they can learn from each other. The trick, though, is going to be helping them warm up to the concept. Aside from the fact that they’re all young goats, they don’t have much else in common. 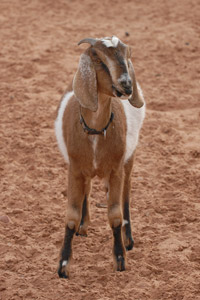 Consider Gigi, who was found in the wilderness as a very young "kid." So young, in fact, that she needed to be hand-raised from that point on. As an aside, though she was accepted at Best Friends, Gigi had to first live in foster care until space became available for her to move to the Sanctuary.

Ultimately, ever since being rescued as a young baby, she was raised around people. With such an upbringing, she grew up thinking of herself as a sort of lower-to-the-ground variety of human. "She’s extremely friendly," explains Best Friends horse manager Jen Reid. "She loves people."

Phil and Monty, on the other hand, had the opposite background. They first lived as part of a city weed-control herd. They lived with other goats aplenty but hardly any people. Along the way, a family bought them from the herd, but the family didn’t play with the goats much. They’ve had little human contact. Monty and Phil have their own unique skill, however. "They do know how to be goats!" Jen says. They’re extremely comfortable in a herd.

When their family moved and couldn’t bring them along, Monty and Phil came to Best Friends. As luck would have it, they came to Best Friends at exactly the right time. The new goat barn had just been completed. This wonderful new building allows indoor and outdoor access for the goats, providing a safe and cozy spot for all the goats and sheep at Best Friends to live. This new space also provided room for Gigi to move to the Sanctuary from her foster home.

Kids will be kids 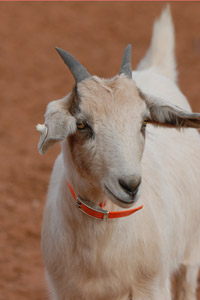 The three young goats were placed in the same play area. For one thing, the other five goats at Best Friends are all much older. The theory was that these three new youngsters could play with each other and keep one another busy. The hope was that Gigi, Monty and Phil could all teach each other a few things.

You see, Gigi doesn’t know how to interact with other goats. She’s a bit baffled about why she has to live with these strange animals. After all, as far as she’s concerned, she’s a person. Meanwhile, Monty and Phil can’t figure out why their new roommate is always playing with people whenever they come around. People, as far as they’re concerned, are mysterious!

For now, the three goats are still mostly just getting used to each other. In time, though, they’re bound to become friends — especially once Gigi warms up to the idea — and will ultimately learn and benefit a lot from their friendships. 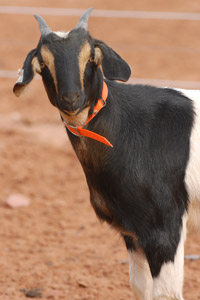 Meanwhile, all the other goats and sheep have been thrilled with the new building. They stay warm and dry, and as an added benefit, they’re more in the limelight than they were in their previous location. Until recently, to see the goats at Best Friends a visitor had to stray off the path a bit. Now, though, the new goat barn (which still hasn’t received its final name) sits alongside the main road, en route to the horses. You can’t miss it. One fringe benefit to the new building might be more volunteers spending time with sheep and goats.

Volunteer work includes cleaning, socializing animals, and even taking Sebaastian or Lambert, two sheep, out for walks. (Odds are that soon Gigi will be able to go for walks as well.) Socializing can be great in helping the animals — these new arrivals in particular — get ready for a new home. Often, that involves nothing more strenuous than sitting around and chatting with them. "And hopefully they’ll come up to you and you can give them them a goody," adds Jen.

For her part, Gigi is already teaching Phil and Monty by example that people can be nice. Of course, those lessons will go a lot further if friendly, new people keep showing up bearing tasty gifts as often as possible.

You might not have the space or resources to care for a goat or other barnyard pal. But you can still help an animal friend in need by choosing one to sponsor today.