When Jake the mule came to Best Friends, he didn't want to be around people, and he certainly didn't want them touching him. Jake was eight or nine years old, and humans hadn't made a very good impression on him so far. Because they didn't understand how to communicate effectively with him, he became resistant and uncooperative. It got so bad that Jake ended up being sold at an auction. But one kind soul changed Jake's fate.

Hope for the hopeless

A woman in Montana, who was interested in trying Parelli Natural Horsemanship training, took Jake home. But she was a beginner, and Jake needed an expert. When the woman consulted a private trainer, she was told that Jake was "hopeless."

That's when he came to the Sanctuary, and Best Friends trainer Ann Hepworth stepped in. An expert in Parelli Natural Horsemanship, Ann demonstrated how the method is helping Jake. But first she had to explain a few things about horses and mules.

Stubborn as a mule? 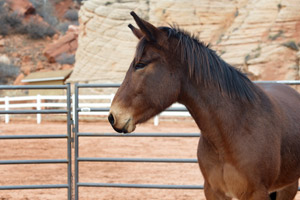 Mules are the offspring of female horses and male donkeys. They tend to be more horse-like than donkey-like, though they have longer ears, narrower hooves and more tapered muzzles than horses. They are heartier, too, possessing what Ann calls "hybrid vigor." People often stereotype them as stubborn, but it is more accurate to say that, as prey animals, they are very skeptical and extremely good at self-preservation. They also tend to be less forgiving than horses.

With Jake, it's all about building trust. But sometimes things can go wrong. For example, early in the training, Ann was trying to teach Jake that it is OK to touch his muzzle to her hand. But when a small shock of static electricity sent the opposite message, Jake didn't forget it. It took four attempts before Ann could get Jake to try the hand nuzzle again.

As far as "horsenality" (personality in Parelli-speak), Jake is a "Right-Brained Extrovert." This means that he is high-spirited, but also highly sensitive, and his default reaction is fear and flight. Parelli counteracts this tendency by focusing on the relationship between the animal and the trainer, and building trust and confidence. It is the opposite of dominance training, which, for a right-brained prey animal, is rather intimidating.

Ann shows that she is a gentle leader by taking Jake through a series of seven games based on natural horse behavior. For example, the "Friendly Game" helps him learn that human touch is nonthreatening. Ann uses a tool called a "Carrot Stick" as an extension of her arm. When she gently strokes Jake's back and legs with it, he stands tolerantly, though he used to react by bolting.

In the "Driving Game," Ann gets Jake to move in a desired direction by focusing her energy on his hindquarters. This game, though highly effective in moving Jake to and fro, requires no physical contact. Jake also showed how well he could walk around Ann in a circle, and dance sideways along a fence. Finally, he played the "Yo-yo game," moving forward and backward in response to a slight manipulation of his lead rope.

After the demonstration, Jake was clearly proud of himself, and Ann rewarded him with a good neck scratch. She says she is really pleased with his progress and that, after three months at Best Friends, he has turned a corner. "He came galloping up to me today," she says. "Of course, then he galloped away. But he came back again." Clearly, practice (and Parelli) will make perfect!