Prosthetic leg for a horse

Image
Riley the horse, who had a bad cut on her back hind leg. is going to Wyoming so Dr. Ted Vlahos can perform surgery and fit her with a prosthetic leg.
By Ted Brewer

For one of the horses living at Best Friends Animal Sanctuary's Horse Haven, last Sunday marked a new beginning, free of the pain that has been plaguing her for quite some time. Riley was loaded into a trailer and transported to Sheridan, Wyoming, where she will have her severely infected leg amputated and replaced with an artificial titanium one. Driving Riley to Wyoming was Dr. Ted Vlahos, a pioneer in fitting horses with prosthetic legs.

Riley has been admitted to the Guardian Angel program, where you can get updates on her condition and help support her new lease on life. 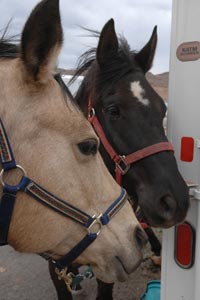 Horse with a severe cut on her hind leg

When Riley arrived at Best Friends back in 2004, she had a severe cut on her left hind leg. Scar tissue formed, causing her tendons to contract to such an extent that her fetlock (ankle) was pulled out of place. The best option at the time was surgery, during which a metal plate was inserted into the leg to fuse the fetlock and straighten the leg.

For a few years, the plate helped Riley lead a decent life, but over the past several months, complications have emerged in spite of all efforts to keep the leg healthy. The plate became contaminated and an infection developed around it, causing the bone to deteriorate. Removing the plate and putting in a new one isn’t feasible because it would entail removing bone that has grown around the plate, and that would destabilize the leg even more.

This winter was particularly hard on Riley – she was obviously in a lot of pain. Horse Haven manager Jen Reid and Best Friends veterinarian Dr. Tara Timpson had about run out of options for easing Riley’s suffering when some good folks volunteering at Horse Haven told them about Dr. Ted and the success he’s had fitting horse amputees with artificial legs.

Jen and Dr. Tara contacted Dr. Ted, and he agreed to come to Best Friends to assess whether or not Riley would be a good candidate for the prosthetic. For a horse to endure recovery and get accustomed to the artificial leg, the animal needs to have a calm temperament, since post-op rehabilitation involves spending a good deal of time in a sling, hoisted in the air. If the horse is prone to anxiety, the stress incurred while in the sling could lead to colic. The horse also needs to have a strong opposing leg – in Riley’s case, a strong right rear leg, because she will be bearing much of her weight on that leg until she becomes acclimated to the prosthesis.

Dr. Ted determined that Riley fit all the criteria. Jen and Dr. Tara "peppered Dr. Ted with questions," as Jen says. They researched the procedure and consulted with other surgeons and vets to make sure it was a good option for Riley. They found out that 70 percent of the horses fitted with artificial legs go on to lead full, mobile lives.

"[The procedure] has been done long enough that we feel comfortable with it," Jen says. "The odds of her having a good quality of life are really high."

Unfortunately, the procedure can be prohibitively expensive. Luckily, Dr. Ted proved to have a lot of heart, offering Best Friends a very reasonable rate for his services and volunteering to transport Riley himself, at no extra charge. He also agreed to transport and operate on two other Best Friends horses with leg injuries, Bambi and Bryce.

Once Riley arrives in Sheridan, she will first spend some time in the sling so she can get used to being in it prior to surgery. At some point next week, Dr. Ted will amputate the leg at mid-cannon-bone, just below the knee, and attach a temporary prosthesis.

"By and large, the horses are very happy to have the painful part of their leg removed," Dr. Ted says, "and they tolerate it very well."

Recovery should take about a month. Once the stump is healed, Dr. Ted will fit Riley with a second prosthesis, padded with foam and sculpted to meld with the stump. Once Riley is accustomed to the artificial leg, she should have full mobility, which means she should be able to stand up, lie down, walk – and even run.

"It’s something I wish [horse surgeons] did more of," Dr. Ted says, apropos of the recent on-track euthanasia of racehorse Eight Belles at the Kentucky Derby. "We hate to see horses with horrible fractures or infections euthanized when in fact they can be saved."

Adopt or sponsor a horse.

Photos of Riley by Gary Kalpakoff