Image
Meet some of the new pups on the block.
By Best Friends Animal Society
By David Dickson

There’s a reason the puppy preschool building at Best Friends stays hoppin’ busy nearly every day of the year. Come on, really. Who can resist puppies?

Once the puppies who come to Best Friends have had all their shots and can attend the socialization class, they never find a shortage of visitors willing to play with them and scratch behind their ears. All that socialization is extremely beneficial, too. The puppies learn useful life skills that help them find and keep homes. The socialization class is held in the puppy preschool building. 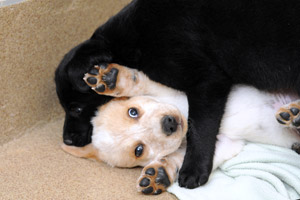 The puppy admissions building, where new puppies go before they can meet the public, happens to be staff-only. That doesn’t mean it’s any less bustling with activity, however. It’s just a place where foot traffic is kept to a minimum to allow the puppies the best possible environment for staying healthy. Even so, sometimes it’s fun to know who might be on his or her way to puppy class in the next little while. Here are a few of the new arrivals.

Mothers of the Year 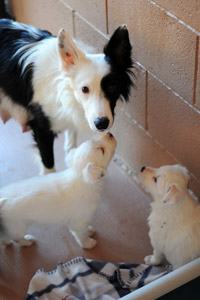 Kashi and her pups

Kashi came to Best Friends from a rescue in Southern Utah along with a whopping eight puppies (somebody give this girl a medal, already!). Named after cereals, her pups are cute as anything. Floopie (short for Fruit Loops), Chex, Quaker, Captain Crunch, Muesli, Charms, Coco Puff, and Granola were only five days old when they first arrived.

Now at four weeks, their eyes are open, and they’re beginning to explore the world around them in earnest, including the outdoor, though enclosed, portion of their play area. "They love to spend time outside," says puppy caregiver Analia Gutierrez.

As might be expected, Kashi gets a little worn out with eight hungry puppies shadowing her every step. Lucky for her, she gets to hang out in the kitchen with staffers from time to time, where a treat and a back scratch are never far away. The puppies are now old enough to eat puppy formula mixed with baby cereal on occasion, so mom gets a much-needed nursing break. "She’s a great mom," says Analia. "She loves everybody. She’s easygoing." 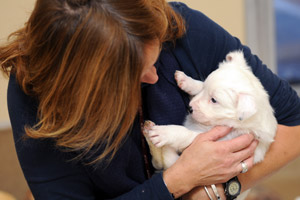 Another mom looking to win Mother of the Year is Zulily, a Jack Russell terrier mix, whose seven two-week-old puppies are roughly the same size as large, fuzzy squirrels. They are impossibly, irresistibly cute! And Zulily watches over them with constant care. "She loves her puppies," explains Analia. "She doesn’t leave them for a second."

When Mom’s not around

Of course, not every puppy who comes to the Sanctuary has a loving mom doting over their every need. Many litters come orphaned for one reason or another. Three such puppies, Wynken, Blynken and Nod, were found in a wood pile not long ago. The person who took them in fed them goat’s milk and eggs. Not the ideal diet, perhaps, but by the time they came to Best Friends at three and a half weeks old, they were plenty chunky! 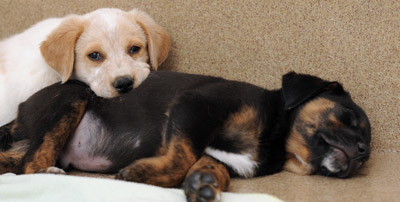 The puppy staffers bottle-fed the three pups for a week, until they were able to eat on their own. While they don’t have a mom, they do have a gigantic stuffed animal dog in their room that they love snuggling (and wrestling!) with as much as possible. Wynken, Blynken and Nod also enjoy interacting with their caregivers. "They love to suck on our fingers," says Analia.

Of course there’s no way to replace mom. Even so, the puppy caregivers do all they can to make each puppy feel safe and happy, whether he or she comes all alone or with mom and eight siblings. All you have to do is see their little wigging tails to know the puppies are in good hands.

So, there you have it. A sneak peek on the future puppy class stars. It’s OK. You can scrap your vacation to Europe to come play with these guys instead. They won’t mind a bit!

Help homeless animals for the holidays

Want to help animals, like the mother dogs or puppies featured in this story, who don't yet have a family to call their own? Consider making a donation to the animals at Best Friends. For a limited time, your gift to the animals living at the Sanctuary will be doubled! That's right, every gift made — up to $2 million — will be matched! Find out more.