Image
Crystal the puppy survives a fire and is now receiving intensive treatment, including multiple surgeries, for her burn wounds.
By David Dickson

The infectious grin from a puppy is hard to resist. When a puppy turns on those, well, puppy dog eyes, and wags his or her tail fast enough to create a spontaneous wind tunnel, it’s hard not to bend down and hand out kisses and belly rubs on sight. No doubt, it’s good to be a puppy. In an ideal setting, their lives are full of sunshine, long afternoon naps, mischief, and play time from dawn ‘til dusk.

Life for Crystal the puppy, however, has been a far cry from easy. Even so, she still manages to pull off one of the most enchanting smiles you can imagine. Once you’ve learned what she’s lived through, it’s easy to understand this girl is something very special. 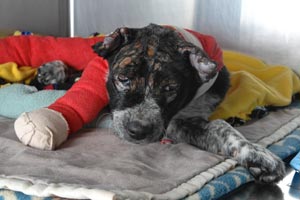 Crystal came to Best Friends after a tragic accident almost took her life. When she was eight weeks old, a fire broke out in her home. As the home burned to the ground, taking the lives of every other puppy in her litter, Crystal narrowly escaped. She ended up with severe burns and wounds from head to tail and was in desperate need of medical attention. This was five months ago. She’s had quite the road to recovery ever since.

In the beginning, her burn wounds required multiple surgeries for wound debridement (cleaning out unhealthy tissue to promote healing). She also needed daily bandage changes, which required sedation. In addition, poor Crystal lost a lot of skin around her eyes and had difficulty closing them. Eyelid surgery was added to her growing list of necessary procedures. All told, she spent four and a half months in the clinic under expert care of the Best Friends medical team.

Through it all, explains Best Friends' interim clinic manager Jasmin Black-Regan, "She was always a happy little puppy. She never wavered." At a time when most puppies are running and playing to their heart’s content, Crystal was fighting to overcome injuries that could have killed her — and she did it all with a grin on her face.

The caregivers and medical team had their work cut out for them in more ways than one. True, Crystal received top notch medical care, yet she also had one more significant need: socialization. All puppies have a critical socialization window when their brains are hard-wiring clues and interpretations about the world around them. It’s vital they gain confidence and social skills during that window. If they miss it, their lives will never be the same.

As can be expected, it’s rather hard to play games when you’re wrapped in bandages and restricted from excess movement. Hard, yes, though not impossible. At every opportunity, caregivers and medical staffers spent time socializing Crystal during her recovery. It was a difficult balance to give her enough play time and also enough down time for healing. "She was just a big, wiggly, wormy puppy," added Jasmin.

Still, they managed to get the balance right on the money. 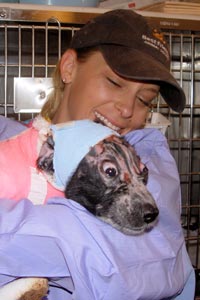 Crystal made steady medical progress while also learning her most important puppy lessons. As soon as she was healthy enough, she even began attending the puppy socialization class.

Crystal is now out of the woods and doing amazingly well. She no longer needs wound care or bandage changes. She has a fair amount of scarring, but, nothing a nice winter sweater can’t fix to keep off the chill. Two weeks ago she was given full medical clearance to go on outside walks and other outings. She has not missed a beat since then.

You see, through her whole healing journey Crystal picked up friends at every turn. Now that those friends can help show her the world, they’ve been coming out in droves. Crystal is so popular she goes on sleepovers nearly every night with visitors and staff members! She’s still hoping to find her forever home. Until then, Crystal already knows she’s been given a second chance at life. She’s going to make the most of it, smiling every step of the way.

Happy stories like Crystal’s may seem like fairy tales, but because of you, these stories become real every single day here at Best Friends. Thanks to your support, Best Friends animals get state-of-the-art care, once unheard-of for homeless pets. No matter what special needs they have, all of their needs are met, both medically and emotionally. And those who were once thought unadoptable become ready for forever homes. Thank you for making this whole thing possible. And please remember that this holiday season only, some generous donors have offered to match your gift to the animals. So you have more power than ever to change their furry lives.