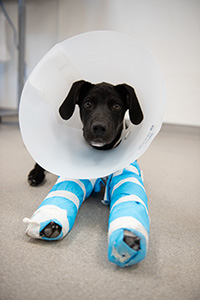 Poor Toby was in a terrible predicament when he came to Best Friends Animal Sanctuary. The four-month-old puppy had two broken front legs. Veterinarians at the Best Friends Animal Clinic knew what had to be done — help Toby heal as quickly as possible so he could enjoy the rest of his puppyhood and find a home. So that’s what they did.

They put both of Toby’s front legs in splints and wrapped them. Then, because he was a puppy and he started chewing on the splints, he also had to wear a cone. With all that medical gear, it looked like Toby wouldn’t be able to move around much. But, being a resilient puppy, it only took him a day or two to figure out how to walk and get around on his own. Soon he was playing with abandon, just like you’d expect a sweet little puppy to play.

Broken leg recovery for a puppy

For the first three weeks of his broken leg treatment, Toby stayed at the clinic so the medical staff could watch him closely and change his splints every few days. He was a fabulous patient and soaked up attention from everyone. But he was a curious puppy, too, and did not like being cooped up in his room. Clinic staff let Toby walk around the treatment area when things were quiet, and they gave him lots of things to keep him busy. He quickly picked up on clicker training and figured out how to get his meals out of food puzzles. 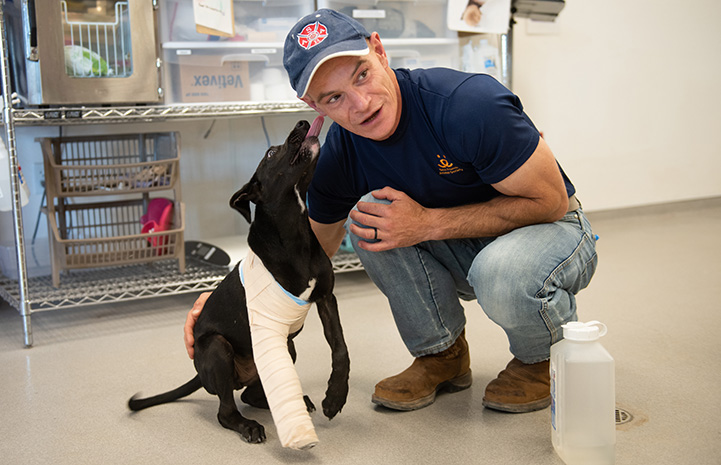 Lucky for Toby, puppies heal fast. Soon, the splint on his left leg was removed and he went to a foster home. For the next month and a half, he worked on healing and learning good house manners. The second splint came off not long after the first, and with that he was able to lose the cone, too. Toby was thrilled.

During the next four weeks, while he still couldn’t play with other dogs and had to be separated from his foster brothers and sisters, Toby hung out on what became “his” futon and enjoyed lots of lap time with his foster family. His foster mom, Phyllis, said he was “very social and sweet,” despite all he’d been through.

By early October, Toby got the medical all-clear and started running around his foster home with no problems. Finally, he was able to do what he loved ― play with other dogs. Toby got along great with his foster brothers and sisters, but he was ready to find a home of his own. So, he moved to puppy preschool at Dogtown. That’s where he met Pedro Rodriguez and his son, Camden. 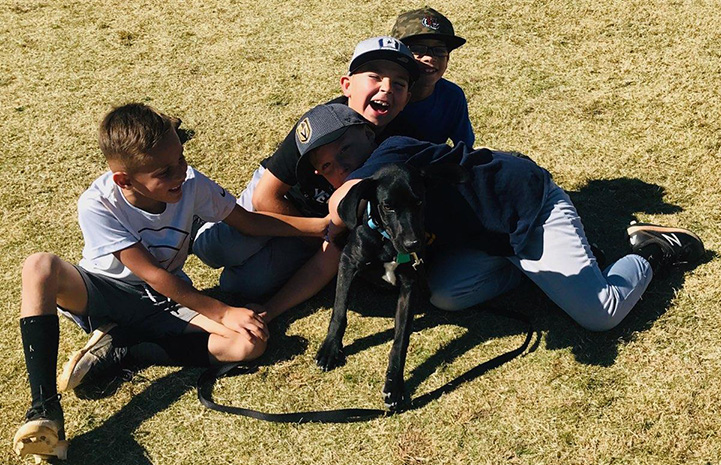 Perfect puppy is worth the wait

Pedro brought his family to the Sanctuary so that Camden could pick out a young puppy who could grow up with him. At puppy preschool, Camden chose a few puppies he wanted to meet, but he also heard about a pup named Toby who was out on a walk and would be back shortly. It was worth the wait.

“If Cam had made a quick selection on the puppies that were there, we would have never seen Toby, so it was meant to be,” Pedro says. “It was love at first sight for all of us. Toby gave Cam all the love and attention he was seeking, and we knew right away he was the one. Then we heard of the breaks he’d had in his front legs, and our hearts melted more for him. Camden wanted Toby and, more importantly, Toby wanted Camden. And so it was.” 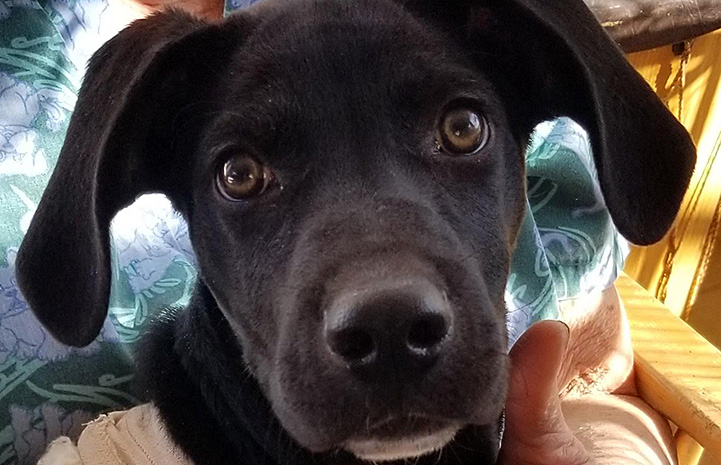 Toby had only been home for a few days when he was adopted again — as the mascot for Camden's baseball team. Pedro says that he loves going on walks and sunbathing by the pool, but that being Camden's best buddy is his favorite thing to do. 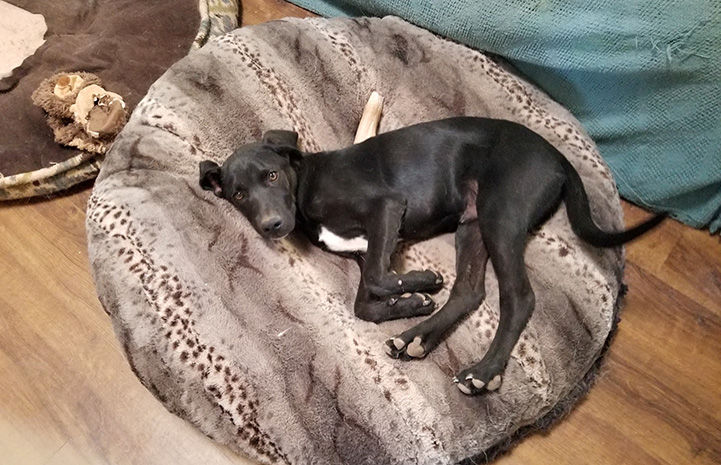