Quaker parrot who loves to shift the blame

Image
A Quaker parrot at Best Friends is quite the character. He loves to shift the blame to other birds when he has done something naughty.
By David Dickson

It’s always fun to watch somebody do something they’re good at. Whether it’s a concert pianist playing a sonata beautifully or an NBA star nailing a three-point, game-winning basket, it’s nice to see somebody put their talents to good use. And for Baby, a new parrot at Best Friends, he’s found the ideal way to use his gift for vocabulary. Namely, in passing the blame if he ever gets caught doing something naughty! 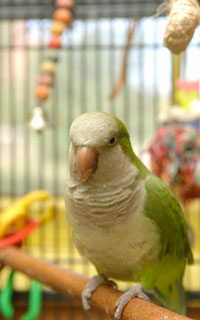 He came to Best Friends with two other parrots recently. These three birds have only ever lived in one home, and were well loved by the senior woman who took care of them. She reached a point where she could no longer keep up with their needs, and so they were accepted at Best Friends.

When parrot manager Jacque Johnson went to the home to pick up the birds, Baby did something naughty. His person said, in a scolding tone, "Baby, you cut that out."

Parrot who passes the blame

At this point, Baby knew exactly what to do. He turned and faced Lolita the Amazon, whom he calls Lita, and in a voice loud and clear declared, "Oh, Lita!" Dogs and cats may try to shift blame to other pets in the home through expressions and body language, but it takes a parrot to point the finger so definitively. 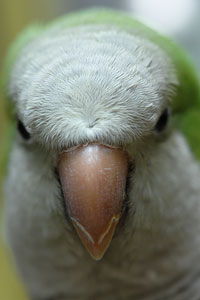 Up close and personal

Baby has quite the list of phrases that he uses for those times when he’s not trying to pass the buck. "Come on, now!" is one of his favorites. "Do you love me? I love you!" is another. He’ll say "Nummy" when he has a tasty treat, and "Wanna go night-night" when he’s tired. He laughs at the drop of a hat and says, "I’ll tickle you!" when he’s feeling mischievous. He’s quite the character. Baby is also sweet as can be, and will step up happily even for strangers. He loves attention and will cuddle for long stretches at a time.

One interesting side note about Quaker parrots is that they’re the only parrots who build nests in the wild. (Other parrots chew holes into wood.) When it comes to nest-building duty, it’s usually the males who take on the bulk of the work. With such details in mind, one of Baby’s favorite hobbies makes a lot more sense, and that’s a desire to build stuff out of anything he can get his beak on! 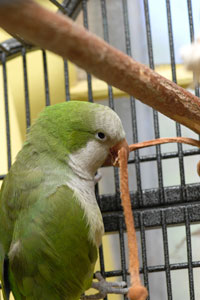 Back home, Baby learned to build structures out of large plastic rings and thin leather strips. So, caregivers have placed those same items in his cage at Best Friends. He comes up with impressive creations each day! Caregivers take them down each night so he can rebuild the following morning. He certainly relishes the challenge. Already, caregivers are wondering what other sorts of supplies he might enjoy using. No doubt, some mighty fine works of art are in his future.

And, if one of his more elaborate structures happens to tip over, making a terrific ruckus along the way, he’ll know just who to blame … "Oh, Lita!"

If you're looking for a bird to add to your family adopt one from Best Friends!