Hercules Mulligan’s life changed a lot (and very quickly) after his person passed away and he lost his home. But soon he was lucky enough to be on his way from New York to Best Friends Animal Sanctuary in southern Utah. At every stop along the way, though, he barked at people and lunged at any other dog he saw. His behavior was a bit overwhelming, to say the least.

Throughout the trip and even after Hercules arrived at Best Friends, he hung onto a shoe that had belonged to his late person. He kept it close and chewed on it a little, like a favorite toy, because, as loud as his voice might be, Hercules was really just a big-hearted pup going through a whole lot all at once. He just needed someone who understood him. 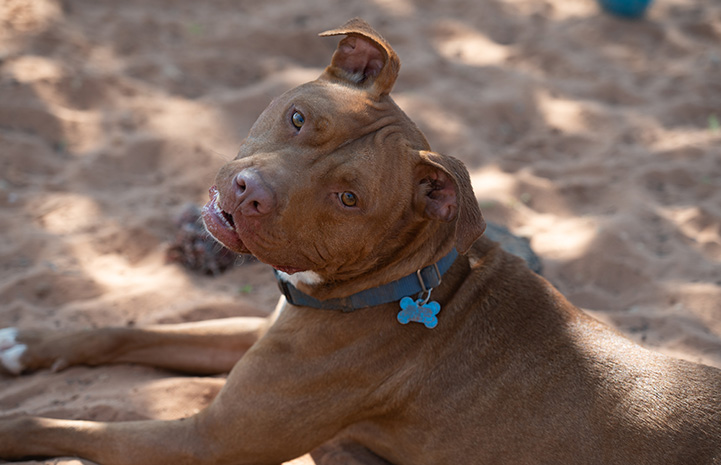 If Hercules saw another dog at the Sanctuary, he lunged and barked at them. If he was on a leash, he would pull, turn and try to chew through it. On car rides, he gnawed his way through leashes, harnesses and Kong toys. It was difficult for caregivers to work with him and help him settle in. And when their go-to methods didn’t work, they had to try something else.

“We learned what to do with him by learning what not to do with him,” says caregiver Janna Kruse, who teamed up with Jenna Karoly to do what they could to help.

“We were like OK, let’s do this together, see what we’re getting ourselves into,” Janna recalls. “He started chewing his leash at first, so we took it off. He was chewing it out of boredom. He was perfect. He just laid in the back of the car and chilled out.” It was that simple. 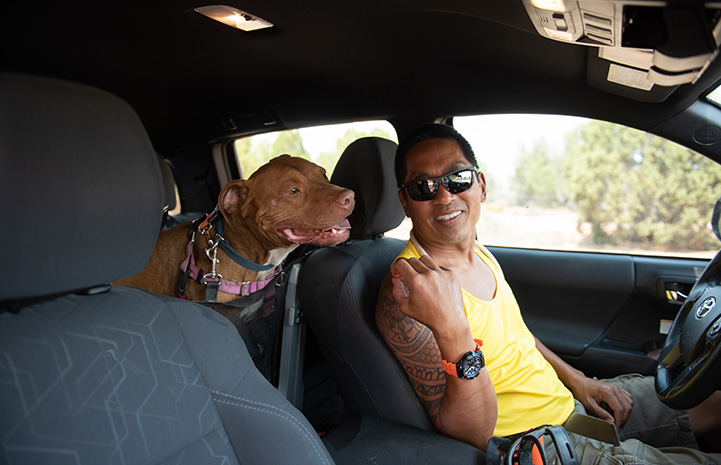 When it came to meeting other dogs, the typical method of introduction didn’t work. For example, the commonly used parallel walk — with each dog walking on opposite sides of the road so they can see each other but not meet — only frustrated Hercules. He pulled, chewed and barked, trying to get over to the other dog.

Though it was stressful for everyone involved, caregivers noted that Hercules didn’t react angrily or defensively. Even though he barked, lunged and nipped, his body language was loose and playful. He wanted to meet the other dogs, but he just couldn’t stand having the leash holding him back. He was a bit much for most dogs, even those known to make friends with just about everyone. They couldn’t handle his energy level.

Janna says with Hercules’ level of activity (where he comes on strong because he seems to love other dogs), it’s a matter of pairing him with the right companion. So, they spent time looking for the right match. There was an awkward meeting with one dog and a good play date with another. And then, finally, they landed on Deborah, another young, energetic dog who needed a friend who could keep up with her.

The first time caregivers tried introducing them through the fence, it was a little awkward. Hercules did his usual lunging and nipping, just wanting to get through and play. Deborah seemed interested, as well, but since she was recovering from knee surgery, everyone decided to wait a bit before having a face-to-face meeting.

Hercules Mulligan was his usual, over-excited self, but when he did anything Deborah didn’t like, she corrected him and he quickly backed off. And when he wasn’t the one being ridiculous, it was Deborah climbing all over him, and playfully pulling on his face and ears. 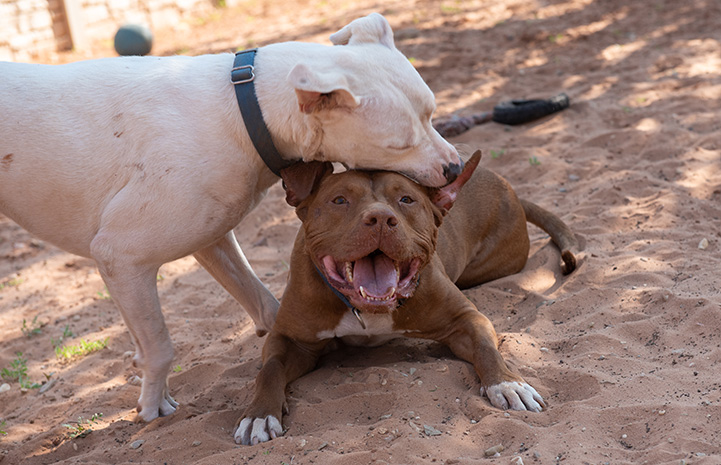 “For the first couple weeks or at least the first week, they really didn’t rest. So we sometimes had to keep them separated to manage her recovery from surgery … and stop him from being so annoying,” Janna says with a laugh.

Finally, Hercules Mulligan had his very own dog friend and roommate — even if they still needed some time to rest separately. With time, they even learned to take their own breaks, and Hercules started relaxing just a little.

Jenna says she doesn’t know if the novelty has worn off and Hercules would be over the top meeting someone new, or if he’d be good with other dogs. “A lot of times, when dogs haven’t met another dog for a very long time, it’s just so exciting the first time that they don’t even know what to do,” she says. “And the more they do it, the more they realize it’s not going to be taken away from them (and) the more they mellow out about it.”

Hercules is still reactive when he walks past other dogs in their yards, and caregivers must maintain visual barriers between Hercules and Deborah’s yard and that of their neighbors. But these days, it’s much easier to keep him from being distracted on walks to the dog park and caregivers can more easily redirect him, if necessary. And at the park, he’s happy just to flop over, splay out his back feet like a frog and lazily face-wrestle with Deborah. 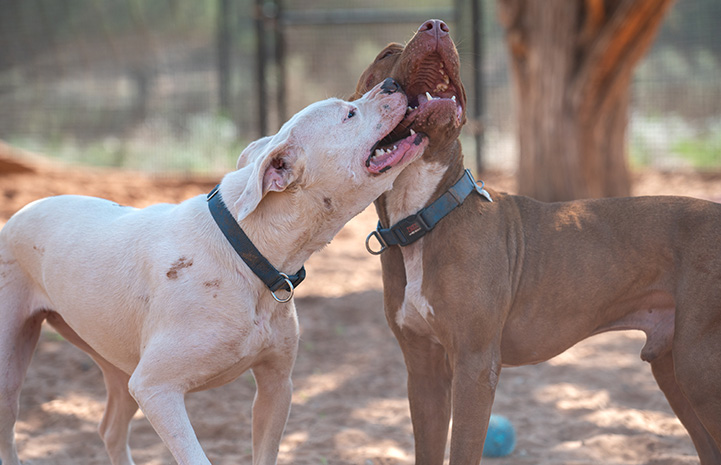 Looking forward to the future

Janna and Jenna say they’re thinking about introducing a third friend to Hercules and Deborah’s yard, but they’re still trying to make sure that the dog they pick is the right match. They’re hopeful that, given the two friends’ current dynamic, a third roommate will add to the balance and spread out the play for when one of them needs a rest.

For now, though, Hercules is quite content with his one canine companion and all the human friends he can make. He happily meets visitors and volunteers and soaks up all the love and attention they have to offer. “He gives kisses to strangers,” says Jenna. “He wants to be with people. I can just put him in new peoples’ cars and he’s like, ‘OK, I’m going for a car ride now.’”

Jenna also describes how when Hercules had a broken nail removed at the clinic, he sat through the whole procedure just trying to lick the face of the veterinarian working on him, despite the discomfort in his foot.

The more his human friends learn about Hercules, the more they’ve been able to help him. He still needs to work on his manners for meeting other dogs and his reactivity, but that will get better with time. With one canine friend, meeting another will eventually be easier. He’s already come a long way from the dog who barked, lunged and chewed on everything. He just wanted a friend, playtime and love, and he just needed people who understood him. 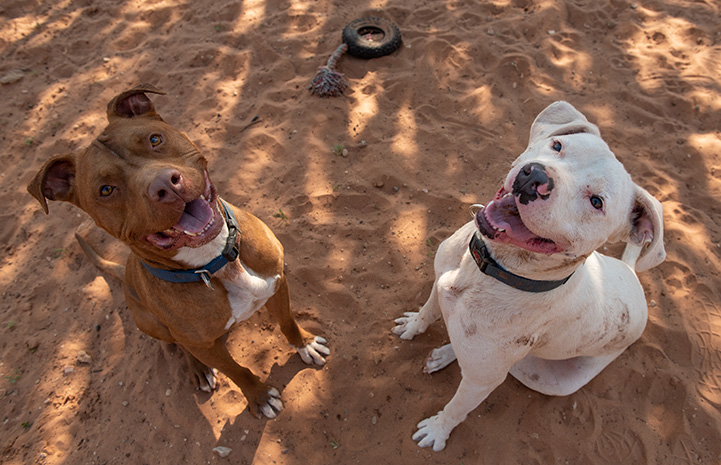 Open your home to a pet

Hercules Mulligan’s next step — just like all homeless pets — is finding a new home. And you can help them.