Recovery for a kitten with the heart of a lion

Image
Kitten struggling to survive comes to the Best Friends Kitten Nursery with a serious infection and pneumonia and receives treatment.
By Christelle L. Del Prete

Vern tears around the carpeted room in his foster home, leaping at his wresting partner — a small, kitten-loving dog named Crowley — as if he’s on springs. Ears back, tiny paws flying, he somersaults away from the dog and dashes under his foster mother’s desk for a moment to catch his breath. Seconds later, he comes bounding out again to renew his playful attack. Crowley is waiting for him, and the two start the game over again.

Because he’s so vivacious now, Vern seems as though he’s always been this feisty and full of life. He’s doing exactly what any two-month-old kitten should be doing: learning, growing and playing to his heart’s content. But if Vern hadn’t come to Best Friends Animal Society when he did, there’s no telling where he’d be today. It’s likely he wouldn’t have survived his first month of life. 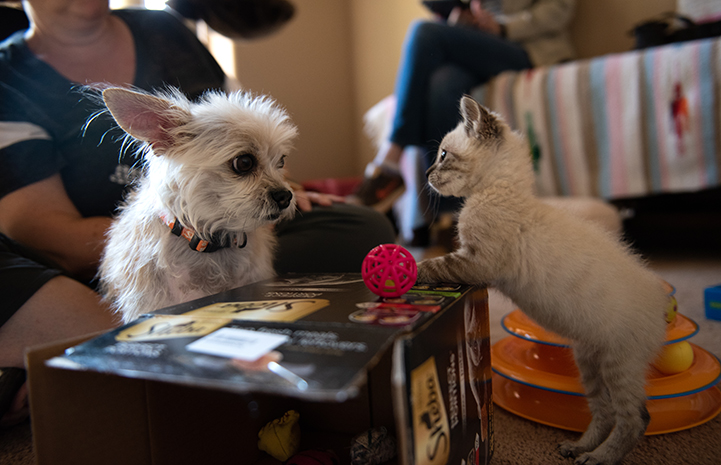 Emergency care for a kitten struggling to survive

Vern was born in a community cat colony, and it seemed like his mother hadn’t been able to take care of him very well. People took him inside and tried to feed him, but the poor little kitten needed much more help than they could give him.

What to do if you find an orphaned kitten 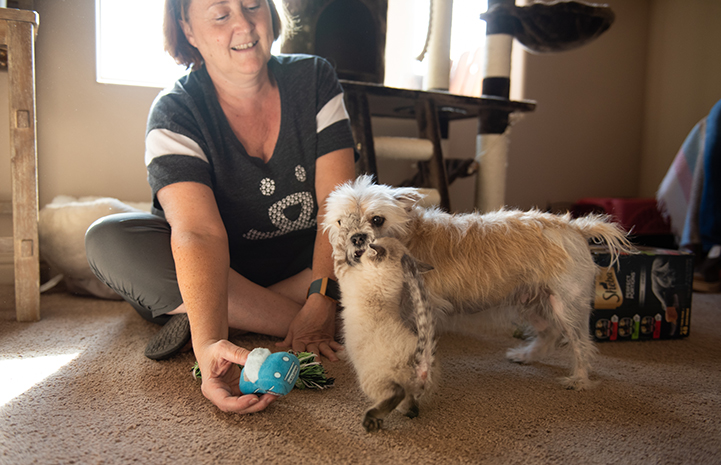 Vern was brought to the new Best Friends Kitten Nursery, where expert staff immediately examined him. They knew he was in rough shape, so although the nursery staff typically provides supportive care until the regularly scheduled Best Friends veterinarian’s rounds. In Vern's case, it was obvious he needed a veterinarian right away, because he wasn’t just sick. He was struggling to survive. He had multiple abscesses on his tiny body, one of his ears was draining fluid, and he was having a hard time breathing. So he was rushed to the Best Friends Animal Clinic. 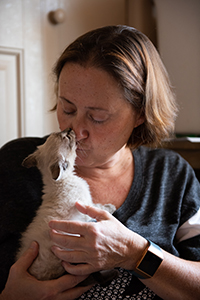 “This kitten was as sick as a kitten could be while still clinging to life,” says Dr. Patti Patterson, Best Friends veterinarian. “I suspect the abscesses were caused by bacteria traveling through his blood system (sepsis), but I am not sure what caused that. It’s possible he had an injury that got really infected and that the infection went into his blood. I suspect it also went into his lungs, causing pneumonia.”

With such a serious infection and fluid in his lungs from the pneumonia, there were no guarantees that Vern would pull through. But the Best Friends veterinary team and staff at the kitten nursery would give him their all. And there was no time to lose.

Vern was started on medications to clear up the infection and to make him feel better. He was regularly given fluids under his skin to keep him hydrated and his wounds and ears were cleaned. Tucked safely in at the nursery, he had a cozy place to sleep, a caregiver to give all these meds and keep constant watch over him, and frequent check-ins from Best Friends vets.

Still, Vern didn’t rebound immediately. It was touch-and-go for the first few days; however, he had received the best treatment possible as quickly as possible, and inside his tiny body he had the spirit and heart of a lion.

“He’s definitely a fighter,” says Janice Dankert, kitten nursery supervisor. “With all that he had going on, some kittens wouldn’t thrive, but he fought through it.” 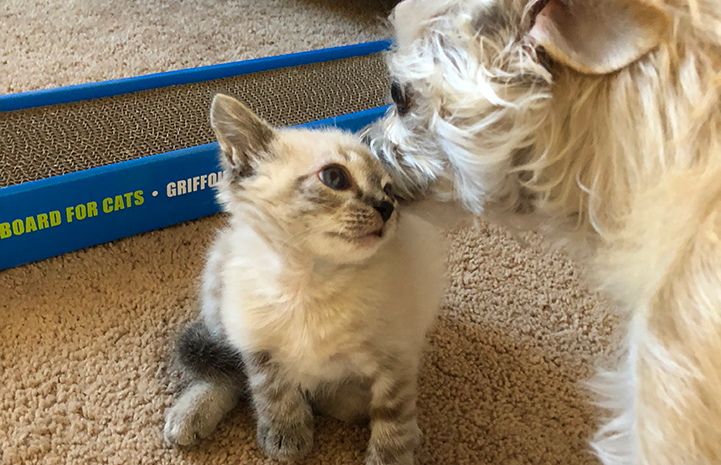 After a few weeks at the Sanctuary, Vern was healthy, happy and ready to graduate from the kitten nursery and move to a foster home. “Most kittens go into foster around six to seven weeks old and stay in foster care until they are eight weeks old and ready to be spayed or neutered,” says Janice. 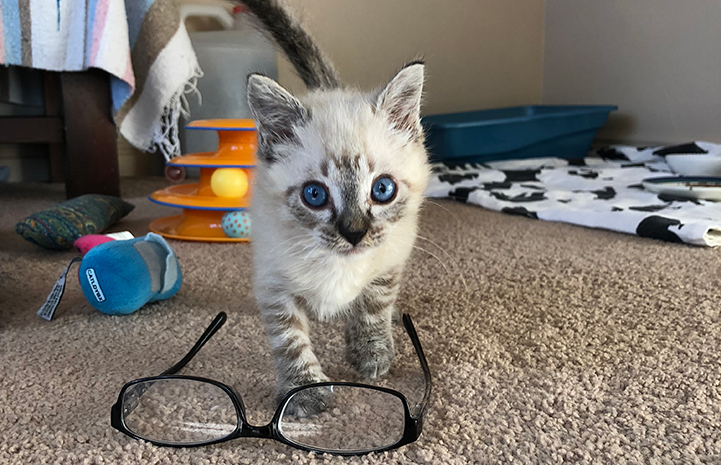 Every kitten moving to a foster home frees up space for the nursery to help more kittens. The more kittens the nursery can take in, the more lives it saves. Some kittens go right from their foster homes to forever homes, while others go to Cat World first. Either way, the time spent living with foster families is great for kittens, because it helps them grow into well-socialized and confident cats. 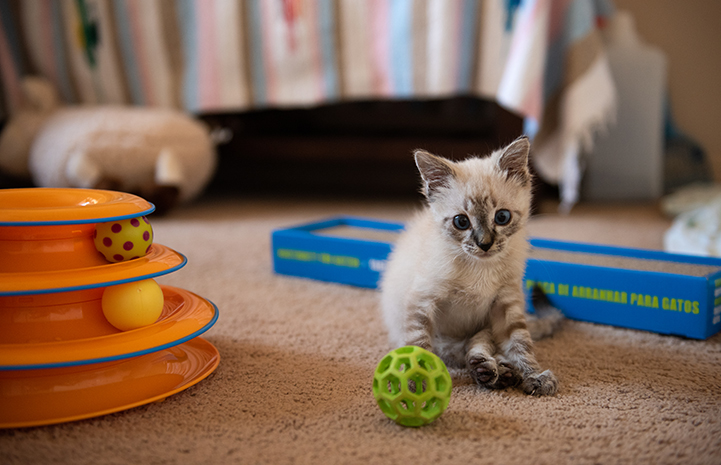 Now that his rocky past is behind him, Vern is building a good foundation for his future by practicing his social skills with people. He’s also getting a taste of what life in a home environment is like — that is, when he’s not too busy playing the fierce little lion. 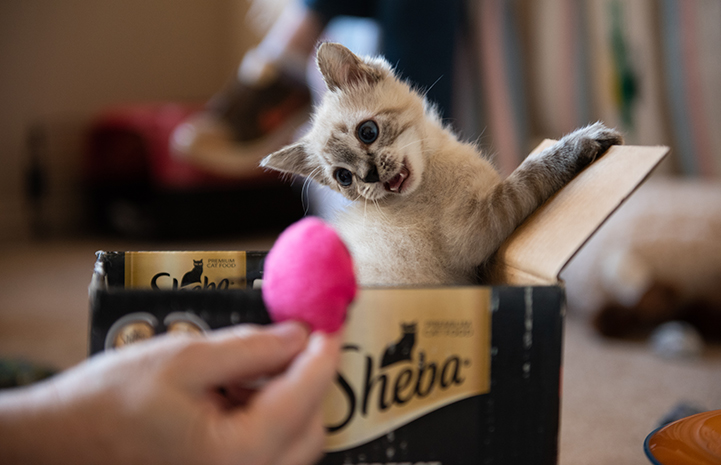 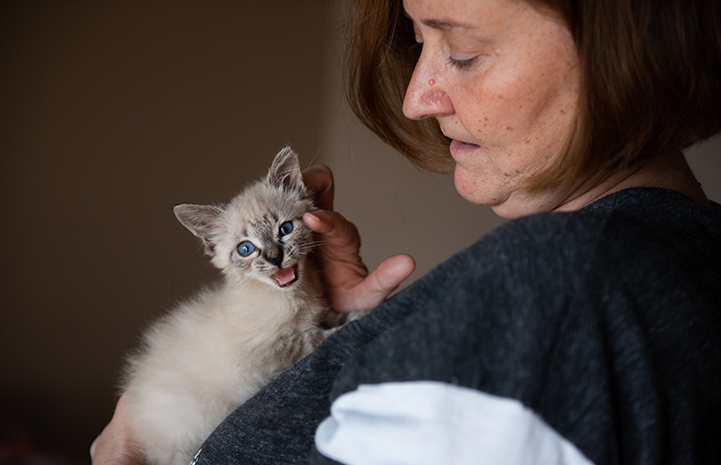