Rehabilitating a dog hit by a car

Image
Dog is hit by a car, which leaves him with two broken back leg femur bones and other injuries. He receives surgery, physical therapy and hydrotherapy.
By Christelle L. Del Prete

“Lovebug” couldn’t be a more fitting name for a dog who’s been stealing hearts at Best Friends Animal Sanctuary since the end of May. Besides being so sweet and charming, the black-and-white dog with the huge pointed ears, eager energy and friendly smile looks like he’s ready to take on the world. And, after months of rehabilitation and recovery at the Best Friends Animal Clinic, he’ll soon be off and running. 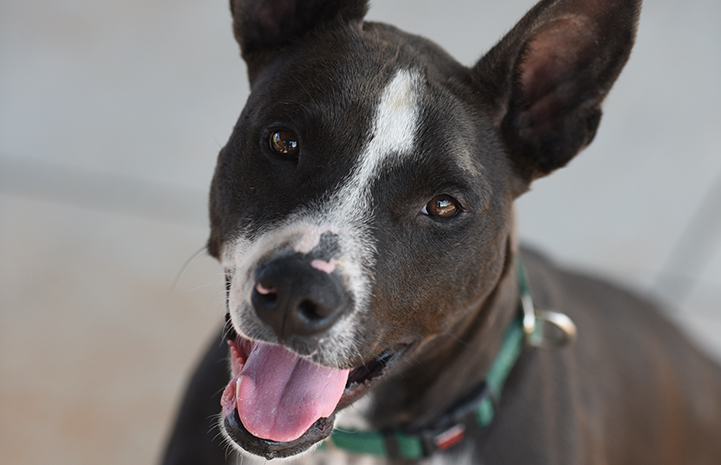 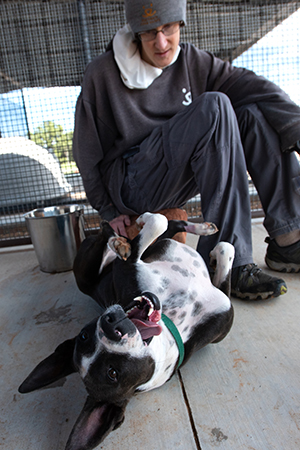 Lovebug’s life took a turn when he was hit by a car in rural Arizona. Though he was badly injured and needed medical attention right away, his people couldn’t afford the veterinary care he would need to recover. Fortunately, a rescue organization stepped up to help Lovebug by getting him to a veterinary clinic for treatment.

Although Lovebug didn’t have any life-threatening internal injuries, the car accident had left him with two broken femur (thigh) bones in his back legs and a serious injury to the skin and tissue of his right hind leg. Vets at the clinic in Arizona managed Lovebug’s pain and treated his wound until it was nearly healed. They also treated him for other conditions such as mange, a bacterial infection and malnutrition. But Lovebug also needed major surgery to fix the damage in his back legs so that he could live a normal life again. Because that would require more resources than the rescue organization had to offer, he was brought to Best Friends.

Best Friends vets were ready and waiting for Lovebug when he arrived at the Sanctuary, but they knew even before he got there that he would need the help of a surgical specialist; so, he was soon on his way to Las Vegas for a consultation and the first of two complicated surgeries.

Because Lovebug’s right hind leg was in worse shape than the left, the surgeon focused on that one first. The first procedure was to repair the broken bone, and the second one was to repair damage to his knee in the same leg. After his surgeries, Lovebug began the long process of recovery and rehabilitation at the Best Friends clinic.

Lovebug needed to get his newly repaired leg moving again and strong enough to bear his weight. Once his right back leg was working again, vets could determine if he needed surgery on the left leg. 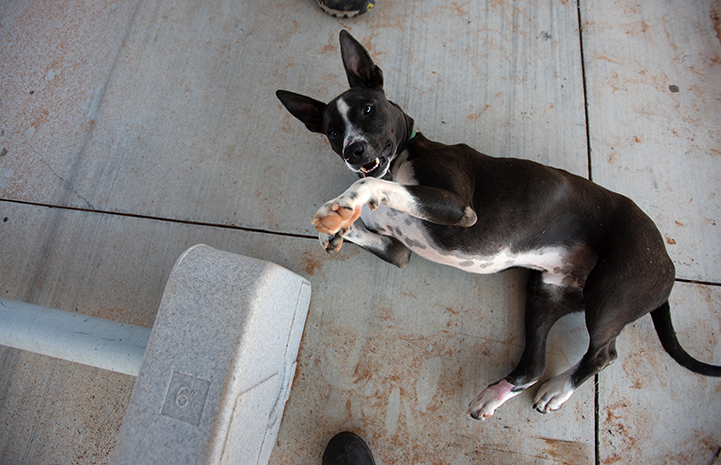 Rehabilitation for a dog: physical therapy and hydrotherapy

To get stronger, Lovebug needed both physical therapy (PT) and hydrotherapy. At the height of his rehabilitation, he was completing two daily PT sessions, each lasting up to an hour. He also had four hydrotherapy sessions a week — something he loved and excelled at once he got the hang of walking on the treadmill in the water tank. 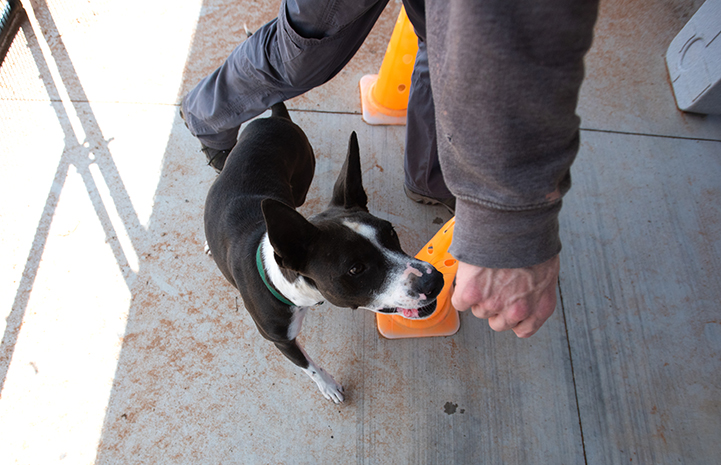 It was quite a rigorous schedule of therapy, but caregivers and the veterinary staff were happy to do it. According to Paul Lindley, a vet tech for Best Friends: “Whatever he needed to get well, he got every single day.”

After all he’d been through, no one would have blamed Lovebug for putting up a bit of a fuss when it was time to do his daily exercises. But that’s when he showed exactly how strong his spirit is. Lovebug never complained; he just forged ahead every day. Though it was a long road to physical recovery, things were going amazingly well, and Lovebug’s can-do attitude was admired by one and all.

“The surgeon is really happy with his progress, and everyone (at Best Friends) is surprised by his resiliency,” says Paul. “He hasn’t let any of his physical problems get him down, and that’s endearing.” 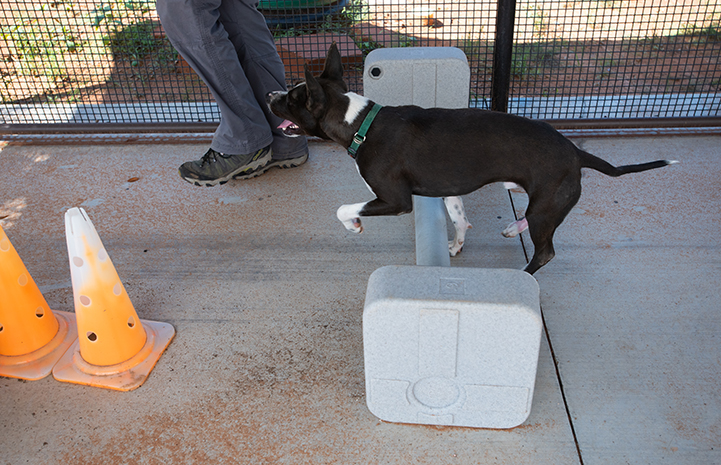 Keeping a dog happy while on cage rest

The recovery process was no piece of cake for Lovebug. One of the hardest things was all the downtime between his rehab sessions. Lovebug is not yet two years old, and he wanted to run, play, explore and learn like any young dog. But to help him heal, his activity had to be restricted so that there would be less risk of reinjury.

In addition to all the medical care provided by the veterinarians, they made sure that the curious, energetic dog had things to keep his mind busy while his body was resting. They loved on him and played music for him. They did clicker training with him and fed him some of his meals in food puzzles. Clinic volunteers visited and sat with him. Lovebug even got to visit with some mellow doggie friends.

As time passed and Lovebug grew stronger, he received some good news: He wouldn’t need surgery on the other leg. “It has healed significantly on its own, and while not perfect, he is getting around on it fine and without pain,” says Dr. Erin Katribe. 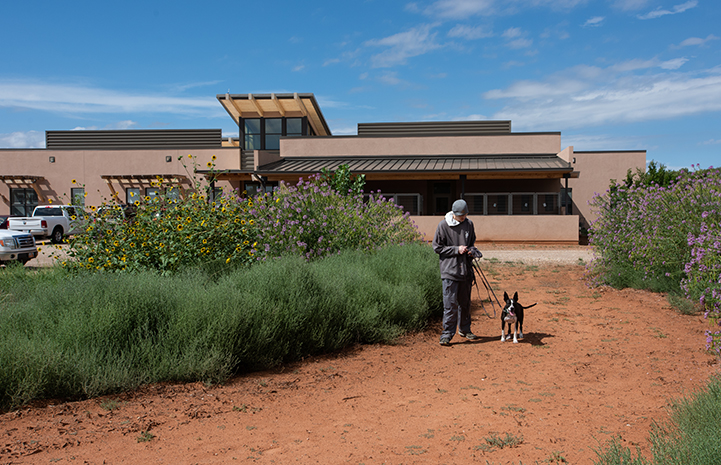 Dog hit by car gets boost in activity allowance

Finally, almost three months after Lovebug arrived at Best Friends, he was ready to take the next step in his journey. He completed his physical therapy regimen and no longer needed pain medication. He also left the clinic and moved to Dogtown. 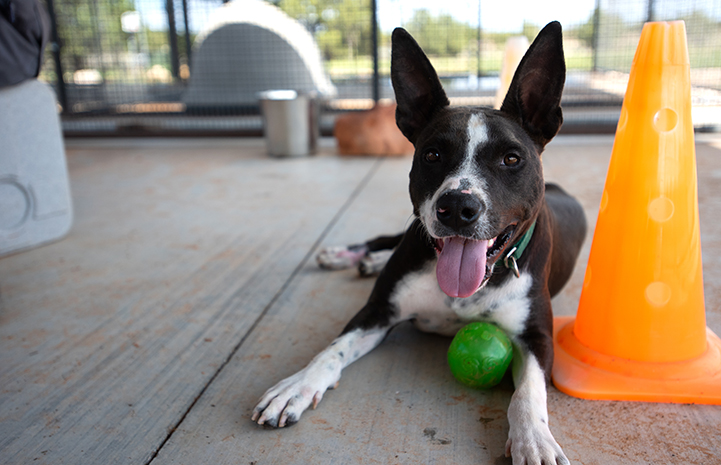 Lovebug also got a boost in his activity allowance by going from restricted activity to managed activity. That means he’s able to do and explore a whole lot more than before. Dogtown caregivers are helping him to gradually increase his activity, as well as the length of his walks as he gets stronger. Lovebug is also meeting a lot more people because his living area at Dogtown is a regular Sanctuary tour stop.

Lovebug still has to wait a bit before he is given the medical all-clear, but the finish line is near. And once he reaches it, nothing will hold him back. 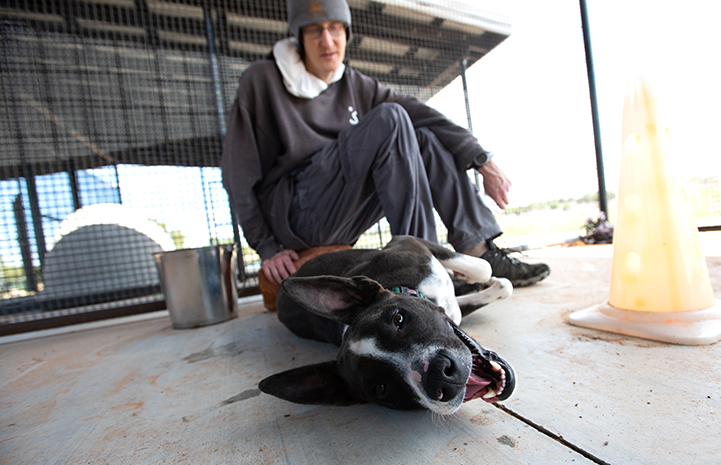