Visit Dogtown at Best Friends and you’ll notice the names Homer and Dolores on the two octagonal buildings that make up Old Friends, where canine senior citizens live at the sanctuary. It’s named after the Harrises, a couple who once donated half a million dollars to Best Friends – the seed money from which Dogtown Heights grew. Besides Old Friends, the Heights includes the Clubhouse, the Fairway and the Garden.

Last week, Homer Harris passed away. He was 87.

"He was incredibly helpful to us," says Faith Maloney, a Best Friends founder and former co-director of animal care. 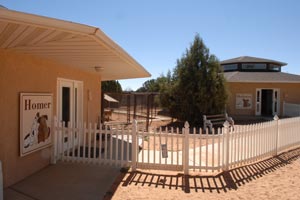 Besides Old Friends, Homer not only paid for, but personally built (with his friend Jim Travers) the Old Dogtown water system, including digging the channels.

The Harrises’ involvement started in the late 1980s, when Homer visited the sanctuary for the first time. He recognized the need for a water system and got the job done.

"We never had to put blue jugs in the back of a truck and drive them around Dogtown again," Faith says of the early days and the original method of water distribution to the dog runs. Homer’s water system is still in use today.

The other major thing the Harrises did was co-sign for the 1993 purchase of 30 acres in the bottom of Angel Canyon, where the Welcome Center and other buildings and animal care areas are now located. Best Friends rented the property for many years and was able to later pay back the loan in full.

"These are people who made it happen for us in so many ways," Faith says.

The Harrises once ran Sage Canyon, a small sanctuary of their own, near Temecula, California, where they took in dogs on their 135-acre ranch surrounded by rolling hills, allowing the dogs to roam freely.

In a dog cemetery on the property, the Harris family recently scattered some of Homer’s ashes "near his beloved dogs," Faith says. The rest of his ashes were placed nearby and a pepper tree planted at that site.

Best Friends, Faith says, is forever grateful to Homer and Dolores for their generous contributions at critical stages in the growth of the sanctuary.

"Homer was a strong businessman who loved animals," she says. "He had a tough exterior, but he was a softy inside."

Photo of the Homer and Dolores buildings at Old Friends by Gary Kalpakoff.

Photo of Dolores and Homer Harris, a copy of which is on an interior wall of each octagon pair at Dogtown Heights, by Jana de Peyer.