Image
Rescued rabbit gives birth to 10 adorable baby bunnies at the Sanctuary. All are available for adoption.
By Christelle L. Del Prete 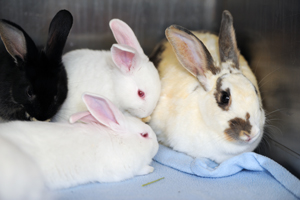 Guadalupe must have been terrified. She and her companion, Sergio, were outdoors and alone, desperately struggling to find safety. No one knows whether they had been abandoned or escaped from an enclosure, but these domestic bunnies probably wouldn’t have survived the winter if they hadn’t been rescued. Snowstorms were coming, natural predators posed a constant threat, and Guadalupe was about to become a mother.

A rescue effort was launched to get the rabbits out of the wild and into a safe place. All it took to entice Guadalupe, who was very tired and hungry, into a humane trap was some yummy food — lettuce and carrots. She was transported to the Sanctuary, and Sergio followed a day later. Guadalupe, though, was terrified of people and didn’t understand that she was finally safe. Either she hadn’t been handled in the past or she hadn’t been treated kindly. And, it turns out, making friends wasn’t high on her priority list.

Shortly after she arrived at the Sanctuary, Guadalupe gave birth to 10 baby bunnies. Caregivers were concerned about how she’d do raising her babies around people, since she was so skittish. They wanted to make sure she wasn’t too frightened or distracted to take the very best care of the babies during their fragile first weeks.

To help her feel more comfortable, caregivers set her up in the quietest part of the Bunny House — the manager's office. There, she was able to relax and settle in with the least amount of foot traffic, so she could concentrate on her young ones. Guadalupe took the opportunity to do exactly that. Instead of stressing about the people around her, she turned all of her attention to her babies and gave motherhood her all.

“It’s not typical that all of the babies in a rabbit litter survive,” says Bunny House manager Jason Dickman. “But Guadalupe took care of them like a champ. She was a phenomenal mom, and she made sure they all made it.”

She even allowed people to check on her babies, handle them and weigh them. At approximately seven weeks old, all 10 are healthy, strong and irresistibly adorable. Five of them are pure white, like snow; one is a rich chocolate brown; and the other four have variations of their parents’ color patterns mixed into their fur — a whole spectrum of whites, browns and beiges.

A bright future for the rabbit family 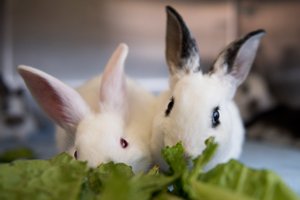 Guadalupe will continue to nurse her little ones for another week, and then the males and females will be separated until they are ready to be spayed or neutered, named and adopted. Once that happens, Guadalupe herself will be spayed, and caregivers will try to re-introduce her and Sergio to see if their bond survived their separation.

Seeing how well the Bunny House caregivers are treating her babies has helped Guadalupe overcome her fear and gain some trust in people, too. She now knows she can count on them when she needs to, and she is working toward making some friends.

Though she was terrified of people at first, Guadalupe got exactly the kind of care and support she needed at the Sanctuary to be a wonderful mom and to give her babies the best possible start in life. These days, all 12 rabbits are thriving at the Bunny House, and great things are in store for them as they get ready for homes of their own.

To bring hope and healing to more animals like Guadalupe, Sergio and their babies, become a Best Friends member.

Learn more about the Bunny House.