There are dog people and cat people, and then there are people who happily check both boxes. But a household with both dogs and cats takes a bit of careful planning to choose pets with personalities that mesh well. Some dogs love cats and consider them just another friend. Others may not want to be best buddies with a cat but are content to peacefully coexist in the same home. Meanwhile, some dogs only see cats as something to chase (and catch if they can).

So, the question of whether a particular dog is good with cats is a common consideration when adding a new pup to the household. At Best Friends Animal Sanctuary, one special cat named Rango is helping to answer that question.

Before becoming an honorary feline member of the team at Best Friends, seven-year-old Rango already had plenty of experience with dogs on his paws. Living at home with Janna Kruse, Dogtown caregiver, he became close friends with Janna's dog, Blossom. “He and Blossom sleep together (and) they’re always curled up together,” Janna says. But Rango’s long list of canine companions doesn’t stop there.

Since adopting Rango as a kitten, Janna has fostered many dogs and litters of puppies. Some dogs have visited for an overnight stay, while others are with friends just stopping over for a short while. The confident cat is always happy to meet them. “I’ll bring them home and he seeks them out,” says Janna, adding that when a dog doesn’t return Rango’s affection, he just cries and runs away to sulk. “He’s very sensitive,” she says.

The part-time role of “official test cat” was perfect for dog-loving Rango. Janna totes him into work with her in the morning, and he spends the day hanging out at the Sanctuary waiting for his doggie visitors. Three or four appointments a day is enough to keep him busy, but there’s a long list of dogs waiting to meet him.

How to introduce cats and dogs 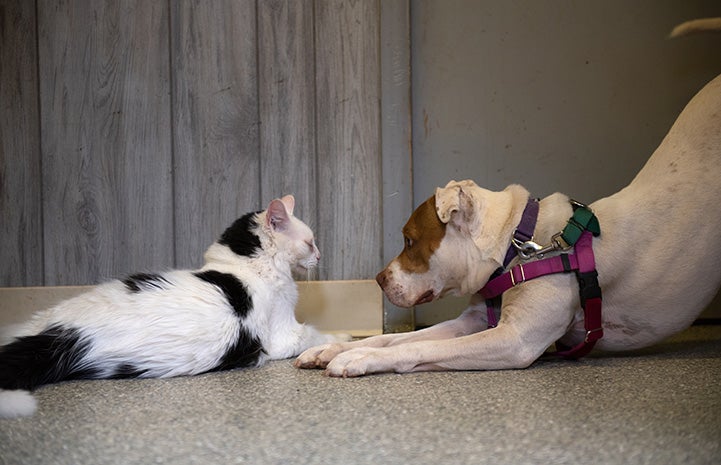 Introducing a dog to a cat

Safety for everyone is a top priority when it comes to introducing Rango to the Sanctuary dogs. It’s a slow process, beginning with Rango being inside his carrier, off the ground. Then the carrier is set down on the ground and if it’s going well, Janna will take Rango out of his carrier and hold him while the dog checks him out. “And if that goes well,” Janna says, “I let him down.”

At any point, if the dog looks a little too intense or reactive, the test stops. Rango might be tolerant of some friendly roughhousing, but his human friends are sure to step in if there’s any less-than-polite interaction.

Taquito, a playful young dog who loves everyone he meets, passed his Rango cat test with flying colors. The two rolled around on the floor, followed each other around and touched noses. They’ve even had repeat play dates, depending of course on Rango’s busy schedule. They are both always happy to see their other-species friend. 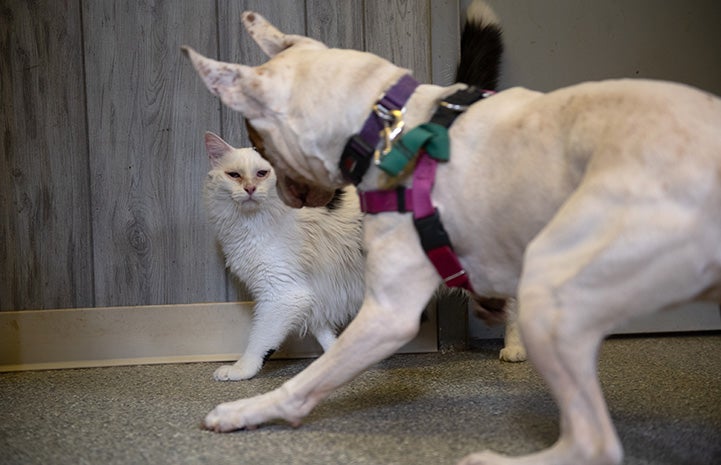 For Taquito, it’s another positive check mark on his “perfect dog list.” He has great dog skills, loves meeting people, and now everyone knows he can be friends with cats, too. With all that going for him, it won’t be long until someone scoops him up and takes him home.

Momma dog Hermosa has already been adopted, but before her family found her, she also passed her Rango test. She was curious about the strange-smelling animal, but perhaps because she’d spent so much time caring for her puppies, she was happy just to sniff and hang out. She wasn’t quite sure how to play with a cat, especially with Rango calmly walking past her, ignoring her invitation to play. So, she continued her own exploration and entertained herself with the human onlookers.

For dogs who don’t get along with other dogs but can pass the Rango test, there’s the very real chance of turning their whole lives around by going home with a resident kitty. For the ones who do like other dogs, Rango’s approval means they could go to a home with other dogs and cats — and for a homeless pet, the more options, the better.

Thanks for joining the Best Friends team, Rango! 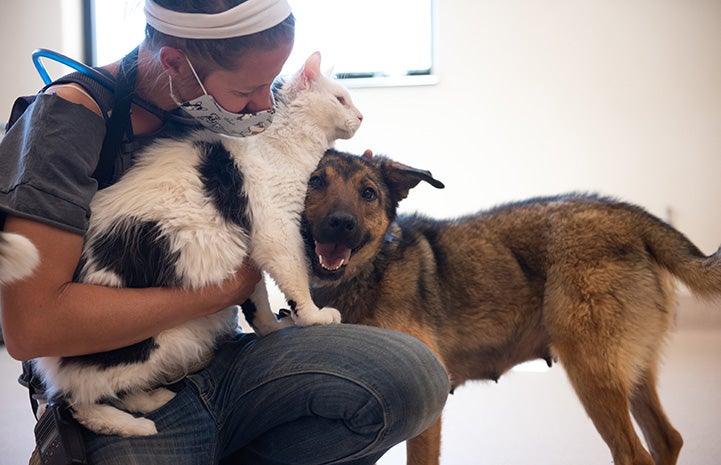