Image
A member of a colony with strays and ferals, one cat turns out to be very friendly and cuddly. She's since been adopted and has become a therapy cat.
By Christelle L. Del Prete

Hazel is only two-and-a-half years old, but she’s already had an incredible journey and accomplished a lot for a young cat. Born into a community cat colony, she wasn’t very friendly with people until she realized she was in trouble and needed help. But once she got the medical care and TLC she needed, she turned into the sweetest, snuggliest cat you could ever imagine.

That’s how she won the heart of Julie Yoder, who soon after adopting Hazel saw that this cat with special needs also has that “something special” that makes her an amazing therapy cat. 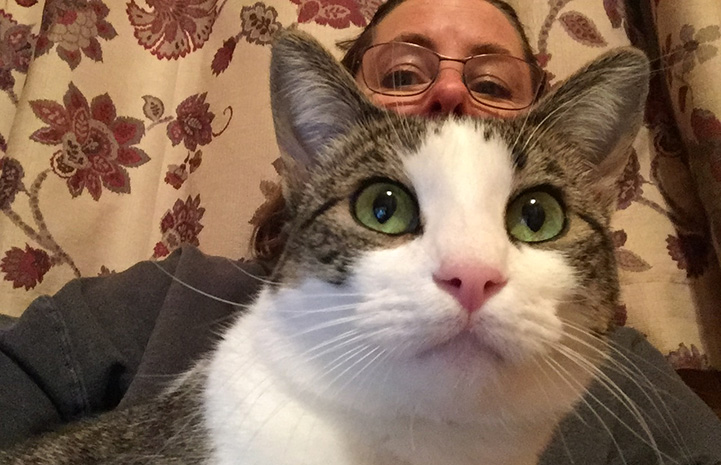 Saving a cat in kidney failure

Hazel was brought to the Sanctuary through Best Friends’ local community cat program (CCP). She’d been living in a free-roaming cat colony not far from the Sanctuary, and the colony’s caregiver realized that something wasn’t right when Hazel, who wasn’t normally very social with people, suddenly allowed her caregiver to pet her one day. Because the young cat also wasn’t interested in food, it was clear that this wasn’t just a sudden change of heart. Something was wrong and that’s when the concerned caregiver contacted Best Friends for help.

As it turned out, Hazel (who was called Zarra at the Sanctuary) has kidney damage. At the time of her rescue, her kidneys were struggling to filter toxins from her blood and, because they couldn’t keep up, those toxins had built up and made her sick. Since she’d been living on the streets and the diagnostic tests at the Best Friends Animal Clinic were inconclusive, no one knows what caused her kidneys to fail. But the Best Friends veterinary team worked hard to save her life, and Hazel rallied in response to their care.

Although the kidney disease will likely shorten her life, Hazel’s health has been stable since her recovery. But because she needs special medical treatment (fluids and blood pressure medication) for the rest of her life, she was moved to Cat World instead of going back to her colony. At the Sanctuary, she quickly earned a reputation for being incredibly friendly and cuddly with caregivers, visitors and volunteers. 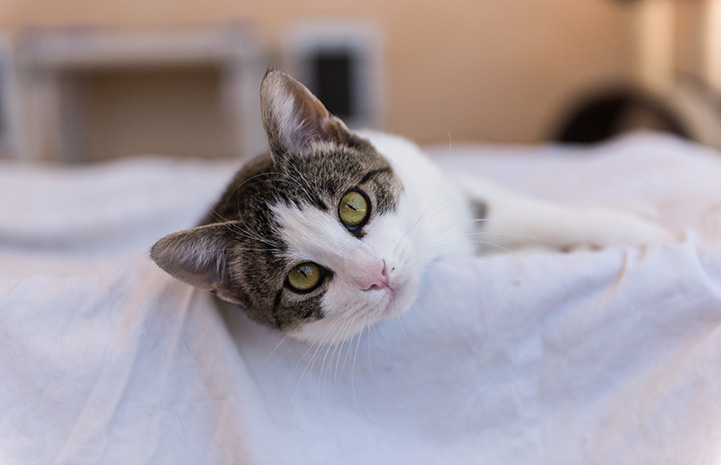 Choosing a cat to adopt

Julie who met Hazel during a visit to as visiting the Sanctuary, was looking to adopt a cat because, after losing two cats, she and her remaining cat, Bentley, were both heartbroken. Bentley also missed feline companionship, so she vowed to find him another friend to love. With the help of a Best Friends adoption specialist, she came up with a list of cats to visit at Cat World and Hazel was on that list. But she wasn’t at the top of it — that is, not until Julie went into her room to meet a different cat. When Julie bent down and stretched out her hand to that other cat, she just threw up her tail and strutted away.

“I had one hand on a cat tree to steady myself as I straightened back up,” says Julie, “and I absently petted the cat lying there. Well, that kitty petted herself with my hand, then proceeded to crawl up my arm and nuzzle my neck. Hazel curled up in the crook of my arm and started purring. And that was that. At home, she settled in for the first couple of months, then claimed our house and our hearts.”

Therapy cat is giving back 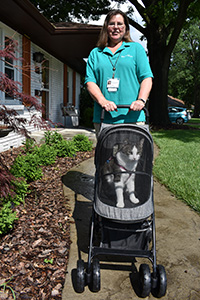 Julie, who has done pet therapy with her dogs for 15 years, recognized that Hazel wasn’t just your average people-friendly cat. There was something extra special about her gentle nature and the way she connected with people. Julie had always wanted a therapy cat, but none of her other cats had seemed like a good match for that kind of work. Hazel, on the other hand, seemed perfect. The only question was if Hazel would enjoy therapy work. To find out, Julie began taking her to friends’ houses for mock visits.

Hazel had such a great time that she took her pet therapy test this past April and passed with flying colors. With her new therapy cat certification, Hazel launched a remarkable new career.

“We have done one visit to a hospice house, and she was amazing,” Julie explains. She curled right up in the arm of a patient and sat quietly while he petted her and talked about his own cats and animals. For that one brief period, he was comforted and felt some peace. That's something I could not have offered him without Hazel. I have a feeling this is the start of many special moments in Hazel's future.”

Now, a cat who once needed help is giving back in the best way possible — by giving love, peace and solace to those who need it most. 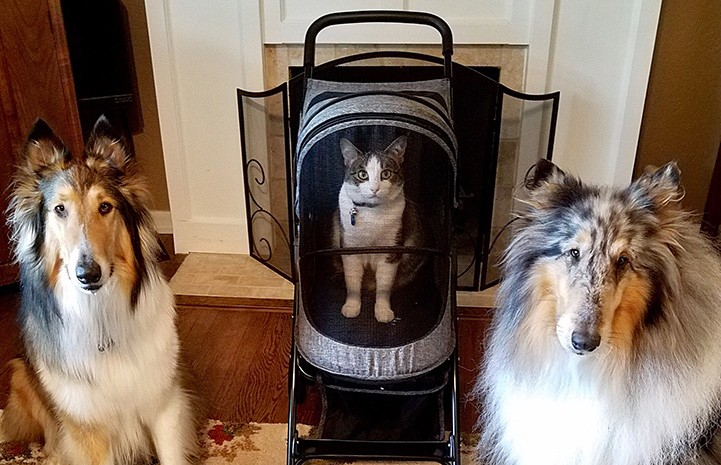 Photos by Kurt Budde and courtesy of Julie Yoder