Rescuing and rehabilitating a duckling

Early this fall In Lake Havasu City, Arizona, a woman and her grown son spotted a lone duckling in a swimming pool. The day before, they had seen the mother mallard duck and other ducklings, but now there was only one. Hoping that someone had been able to rescue the others, they plucked the lone duckling out of the swimming pool, where she clearly did not belong, and took her home. 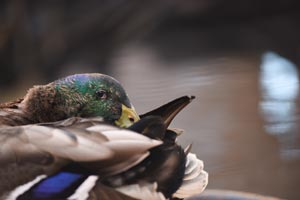 They took care of her as best they could and when she seemed big enough, they took her in a boat out onto Lake Havasu to release her. Much to their dismay, when they put her in the water, she started to sink. Fortunately, they were able to grab her before she went under.

What they did not know was that ducklings are not automatically waterproof and need special care to ensure that they will retain their waterproofing. The appropriate place for the duckling was with a licensed wildlife rehabilitator. So they called Carmen Smith, licensed wildlife rehabilitator and manager of Wild Friends at Best Friends Animal Society.

The duckling’s kind rescuers saved her life and went to great lengths to drive her to the Sanctuary. The drive should have been about five and a half hours, but the only major highway between Las Vegas and Kanab was washed out, forcing a 100-mile detour. By the time the duckling’s benefactor got her safely to Best Friends and returned home, the round trip totaled approximately 19 hours.

After settling in from the long car trip, the duckling was taken to the Best Friends Animal Clinic for X-rays, which showed she had a break in two places in one of her wings. It hadn’t been obvious because the little wing bone was being supported by the larger wing bone, making the injury impossible to spot just by looking at her. But the bones were lined up well, so she was fitted with a small brace. In about four weeks, the wing healed well and, it turns out, she will be able to fly normally. 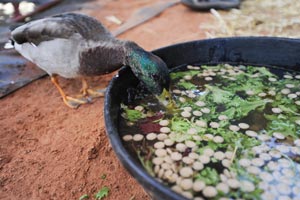 Since the duckling had spent quite a while relating to humans, before she could be released she needed to learn that she’s really a duck, and that means having some duck friends.

She’s outside now, interacting with two duck neighbors in a small, enclosed pond. The pond is perfect for her, with half of it deep and the other half shallow, so she can gradually step into it. At first she was brought inside at night so she could be kept quiet, with no wing-flapping, so that the wing could heal.

Back to the wild soon

Now she’s outside all the time and nearly ready to be released. Thanks to the kind rescuers who went to so much trouble to save her life and bring her to Best Friends, she’ll soon be taken to a suitable lake (which doesn’t freeze over in the winter) where she will join new mallard friends and embark on her wild life.