Rescuing an eagle hit by a car

Around 11:30 in the morning, his car hit a golden eagle. Not knowing what to do, the driver just left him. But he couldn't get the eagle out of his mind, so three hours later, he drove back to the site of the accident. Finding the eagle still alive, with an apparently injured wing, this time he thought to call Wild Friends, the wildlife rehabilitation area of Best Friends Animal Sanctuary. He spoke with Carmen Smith, Wild Friends manager and licensed wildlife rehabilitator. He told her where the eagle was.

Road accidents are common for birds of prey

Car accidents are a lot more common for birds of prey than many people realize. This was the second of two calls to Wild Friends around the beginning of September about eagles hit by cars.

Finding anything along desert roads out in the middle of nowhere can be tricky. Carmen had a feeling, as she set out with staff person Barbara Weider to rescue the injured eagle, that it might not be easy to find him. She was right; it wasn't. 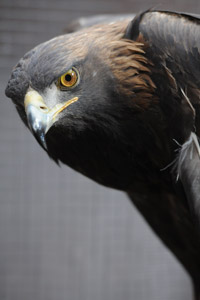 Arriving at the site where the eagle was supposed to be, right by the roadside, they proceeded hiking systematically, first one way and then the other, each time going a bit farther. There was no trace of the eagle. This was on the road to Toroweap, a little-traveled route to reach the Grand Canyon.

Then they drove at a snail's pace, with Barbara standing up, peering through the sunroof. White-tailed antelope squirrels dashed across the road (fortunately all escaped safely), and a few drivers zipped past them at 60 miles an hour. They spent another two hours looking, determined not to leave behind the injured bird.

Still there was no eagle. After four hours of searching, Carmen spotted what might be a feather poking out from under a bush. It was indeed a feather, attached to the eagle who had hidden under cover.

Carmen had brought along some medical supplies, knowing that the eagle might be in shock and very weak. They didn't get back to Best Friends until around 7:30 that evening, eight full hours after the eagle had been hit by the car. On the trip back, they were able to give him emergency care, which was probably lifesaving. Back at Wild Friends, he got more fluids, vitamins, and pain medication, and his right shoulder was expertly bandaged.

Now the eagle is improving steadily. He is still being hand-fed twice a day, and he has some vision problems, caused by head trauma from the car accident. This kind of eye problem, induced by trauma, can often clear up with a little time.

X-rays were inconclusive about whether he had a break in the right shoulder. Carmen says, "He's a lot perkier now, and time will tell" whether or not he'll be back to his normal good health, with full flight. Hopefully, he'll be fine, and will be released back to the wild. If not, he'll be placed by the U. S. Fish and Wildlife Service in a center where he can live happily with the companionship of other eagles.

It's good when you're driving to be aware of wildlife, including birds who may fly across the road or may be on or near the road. If, unfortunately, there is an accident, you can be prepared ahead of time by having the phone number of a licensed wildlife rehabilitator on hand.