Resource-guarding dog learns how to bargain

Image
Milo’s smart enough to know that a fair trade is the way to go.
By Christelle L. Del Prete 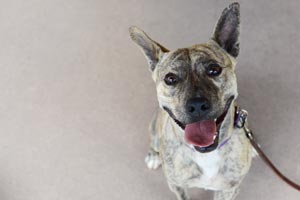 Milo’s such an intelligent dog that in just a few moments, he sizes up new people and decides if they are trustworthy. But when it comes to resources like food, treats and chew toys, he doesn’t have much faith that people will keep the supply coming. He’ll guard those until he’s had the chance to build a solid relationship with someone. Only then will he entrust his prized possessions (like food bowls) to that person.

As Dogtown trainer Emily Strong explains, resource guarding isn’t just a common behavior in dogs. It’s universal. “Humans do it, too,” she says. “That's what locks and alarm systems are all about — protecting our resources from people who might take them away. Dogs are no different. They protect whatever they perceive to be a valuable resource from any person or animal they feel might pose a threat to it.”

Although Milo’s resource guarding is perfectly natural and understandable, it’s something that could make or break a potential adoption. People often perceive dogs who guard their resources as "mean" or "aggressive." They are less likely to adopt those dogs and are more likely to return them once they’ve exhibited those behaviors in the home.

Milo’s guarding tendency is also a symptom of an underlying fear that his basic needs won’t be met.  Emily says, “It is every bit as important to help dogs (like Milo) feel calm, confident and secure, as it is to help them become more adoptable. It’s central to improving their quality of life.”

The fine art of the fair trade 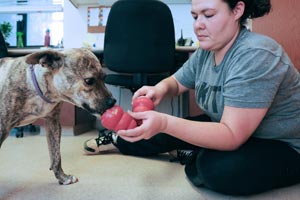 So Milo began learning the fine art of the fair trade. First, Emily frosted two big rawhides with Kong stuffing. While Milo happily chewed one, she offered him the other and waited for him to pick it up before taking the old one. Once Milo was comfortable with that transaction, he graduated to taking a new rawhide at the same time that Emily took the old one.

Finally, Emily would take his current rawhide and have him wait a few beats before giving him the new one. Milo quickly learned that whenever he gave something up, he’d always get something just as good in return, and that made him feel OK about Emily taking his things. “It’s our pact,” Emily says.

Milo’s gotten so good at these trading games that he’ll even let other Dogtown trainers and caregivers play them with his food bowls and kibble. He’s trying it out in locations beyond the Dogtown trainers’ office, too, so that he understands that the pact with Emily extends to other people in other places.

Keeping Milo’s active brain busy helps him, too. Now he’s learning nose work, a training process in which dogs learn how to locate specific scents. Milo was “a total rock star” in his first session with Emily and is thrilled to have a job to do. It’s just one more way to keep his anxiety and his resource guarding at bay.

Today Milo’s a happier, more relaxed dog, and his new skills and willingness to share will shorten the wait for his forever home.

To bring hope and healing to more animals like Milo, become a Best Friends member.