Thirty-one years of seeing the worst in people as a member of the San Francisco Police Department can harden a heart. However, Judie Pursell never let that happen. Her love for animals has kept her heart open — especially her love for the animals at Best Friends.

Judie first learned of Best Friends after reading a short magazine article in the 1980s. She kept that magazine in hope of one day visiting the Sanctuary — and then seeing the “DogTown” television series reignited that desire. She vowed to make the trip and in 2010 she did.

“My first experience at Best Friends was so amazing,” says Judie. “I fell in love with Best Friends from the minute I took the tour.”

After a week of volunteering, she developed a close connection to the Sanctuary, its animals and the staff, and realized she had to come back. She’s returned at least twice a year since then, each time with a story to tell. On her third visit she connected in another way when she adopted Charity, a dog she met at Old Friends, the area of Dogtown where senior dogs live. 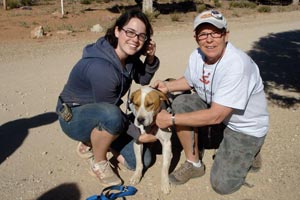 Eve was another dog who drew her in. Because of neurological issues, Eve could not walk without falling, but she never let that get her down. That tenacity appealed to Judie and when she heard a cart might help, she raised $500 to order a custom-made cart. During her next trip to the Sanctuary, she had the opportunity to see Eve take her new cart for a first spin outside on a trail.

Everyone cried tears of happiness. “It was probably one of the most fulfilling things I’ve ever done,” says Judie.

Judie was initially taken aback by the number of pit-bull-terrier-like dogs at the Sanctuary. However, as she met more of them, she quickly realized the error of her ways and became enamored.

When Judie had the opportunity to meet some of the Vicktory dogs, she says, “I thought what beautiful animals these guys are (having gone through what they’ve gone through) and then I saw the love that they possess. I was completely a convert.”

Now she’s drawn to pit-bull-terrier-like dogs and is a champion for their cause. She’s eager to share her personal transformation, educate others and change perceptions. 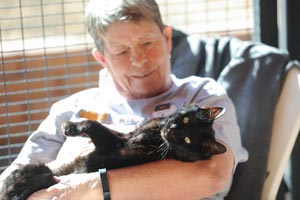 Judie’s also a cat person and she recently volunteered at Casa de Calmar, the area of the Sanctuary where cats with feline leukemia (FeLV) stay.

After she finished cleaning, she sat down and was immediately joined by Omar. He started on her lap, but quickly worked his way up to her neck. The two were so comfy, they took a little cat nap together.

When Judie woke, Omar gave her a “Do we have to move?” look. But it was time for lunch, so she set him down. Omar didn’t give up and meowed to her all the way to the door. His message must have worked, because Judie returned after lunch and the pair enjoyed some more lap time together.

Giving back to the animals

Judie continues to return to the Sanctuary because she feels it’s her way of giving back. However, volunteering actually contributes more to her.

“People like to go to Disneyland. They call that their happy place,” says Judie. “For me, Best Friends is my happy place.”

Photos by Molly Wald and courtesy of Judie Pursell