Ringworm in shelter cats is treatable

If you have the pleasure of meeting Cesaro, a cat at the Best Friends Pet Adoption and Spay/Neuter Center in Los Angeles, you’ll quickly learn that he’s a laid-back and friendly guy with the kind of soft buff-and-white fur that makes you want to hug him. 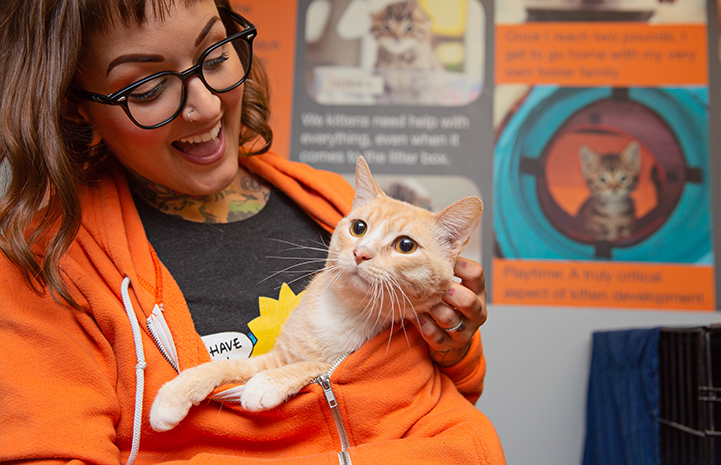 Like all of his fellow felines at the center, Cesaro deserves every chance to have a new home, but not so long ago that might not have been possible. When he was surrendered to Los Angeles Animal Services (LAAS), it was discovered that his patchy fur was due to ringworm, a treatable yet highly transmittable skin condition.

Ringworm isn’t life-threatening in the medical sense, but if you’re a cat like Cesaro in a shelter filled to capacity, it has the potential to be. And it doesn’t help that shelter cats can have high stress levels that can lower their immune systems.

“Ringworm can be pretty easy to spread to other animals and people,” says Dr. Nicole Petschauer, senior veterinarian for Best Friends. “But it’s not a reason to euthanize cats, because it is a treatable and recoverable disease.”

Janette Nevils, the center’s cat care manager, says that Los Angeles Animal Services does treat cats with ringworm. The problem is that most of the time there are more cats at the shelters with ringworm than there is room.

“Because the cats need to be isolated from the general population, and since the treatment and healing process can take several weeks, the shelters just do not have the time or space to accommodate lots of cat with ringworm at one time,” says Janette.

Because one of our goals is to help get Los Angeles to no-kill by supporting the city shelters, Best Friends is making extra space to house and treat around 75 LAAS cats and kittens with ringworm at any given time.

Depending on where cats are in the treatment cycle, having ringworm doesn’t prevent cats from getting adopted. One room at the center — the Fungal Jungle — is for cats and kittens near the end of their treatment. Located near the entrance, visitors are given gloves and a T-shirt to put on and are invited to step into Fungal Jungle if they see a cat they’re interested in adopting. Fungal Jungle’s prime location helps convey to adopters that cats with ringworm are no different from cats who don’t have it. It’s temporary and not life-threatening.

“It shows that they’re normal and that they’re happy,” says Samantha Bell DiGenova, cat behavior and enrichment lead at the center. “The cats in Fungal Jungle have been handled a lot for their baths, so most of them are extremely comfortable around people,” says Samantha. “I feel that our setup is helping to reduce the stigma of ringworm. And we've gotten a lot of cats adopted from that room, too.” 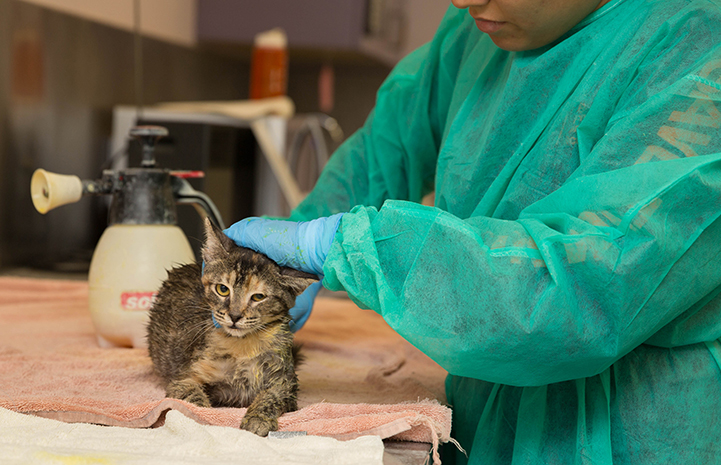 How to get rid of ringworm in cats

Contrary to its name, ringworm is not a worm, but a fungal infection. It’s essentially the feline equivalent to athlete’s foot in humans. It can cause itchy, hairless patches on cats’ skin and sometimes takes months to clear up.

When Cesaro came to Best Friends, caregivers got him settled in one of the areas designated for cats and kittens needing ringworm treatment. He was monitored closely by Janette and a team of dedicated volunteers working alongside the staff to maintain the protocols that clear up ringworm.

“At Best Friends in Los Angeles, we use a combination of topical and oral treatments to expedite healing,” says Dr. Nicole. “All of our cats who are positive for ringworm receive a medicated shampoo bath twice a week to kill any spores present on the cats.” 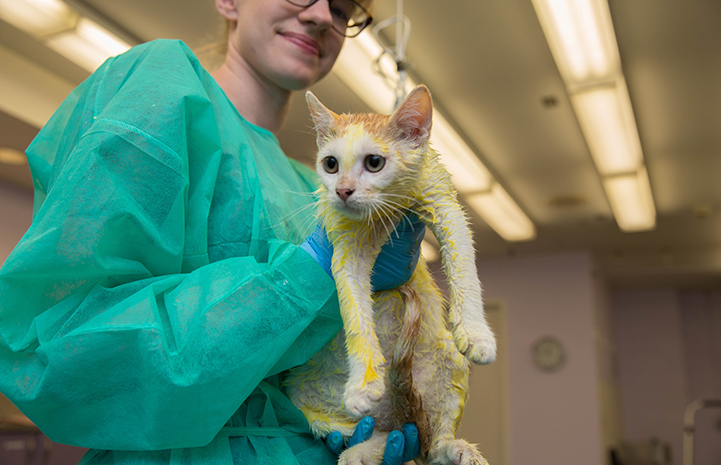 Additionally, the cats are treated with an oral anti-fungal drug, and the rooms (including every kennel) are kept extremely clean. “By removing the spores from the environment, we are limiting the chances of re-infection or spreading infection,” says Dr. Nicole.

Fostering a cat with ringworm

The success of the ringworm treatment program at Best Friends wouldn’t be possible without foster volunteers. “The more cats we have in foster, the more we can take in from city shelters,” says Janette.

Jeanie Butler and her daughter started fostering hospice and neonatal kittens a few years ago. Then last year, they began fostering kittens in treatment for ringworm, and these kittens quickly became some of their favorites to foster. “Our foster cats with ringworm are otherwise very healthy,” says Jeanie. “They’re actually a lot of fun.”

Jeanie has a fenced-in back yard with an area that gets a lot of sunlight, which can help accelerate a cat’s ringworm treatment. On most days, she’ll place her foster kittens in harnesses and let them roam around and soak up the sun while she has her morning coffee.

Jeanie keeps her foster cats in a safe, open area separate from the rest of her house, and she follows the guidelines given to her by the Best Friends staff. This includes donning what Jeanie describes as a “funny, old housecoat,” to bathe them and clean their kennels.

Currently, she’s helping two kittens (Nugget and Nadia) beat ringworm, so they can return to the center and find homes.

Sometimes Jeanie gets looks of concern when people hear she fosters cats with ringworm. But then she explains what ringworm really is and how much their lives may have been at risk if they stayed in a shelter.

“There is nothing more fun than watching my ringworm babies frolic around my yard, getting to be cats,” says Jeanie. “They will play and run, then come to check in with me and get a little cuddle, and then take off playing again. They are normal and otherwise healthy cats who just need a little extra bit of time and care. I can’t imagine thinking that a few baths and extra cleaning is too much work to save a life.” 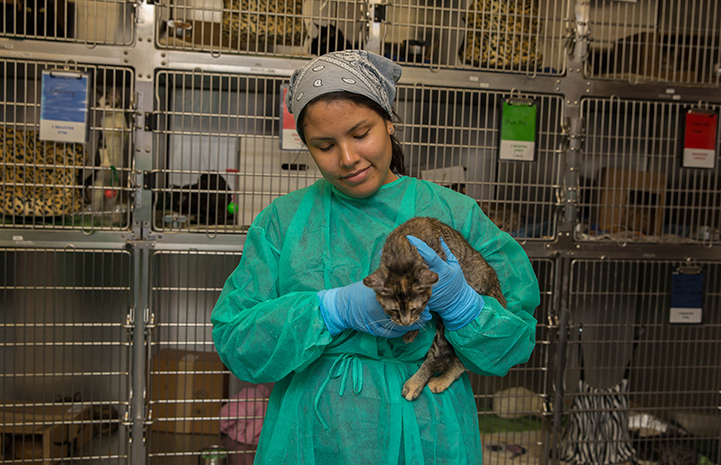 Adopting a cat with ringworm

Foster volunteer Barbara Russo has opened her home to a total of 20 kittens with ringworm. “Being a nurse, I’m used to dealing with health issues,” says Barbara. “I am nearing retirement, and I felt like I wanted to make a difference in the world. This was a way I could contribute.”

Barbara even added to her home a professionally installed, screened-in cat area, complete with air conditioning for the days when it gets hot. Most days, though, she leaves the doors open so the kittens can look outside and get fresh air.

She also fell in love a kitten she named Sweet Pea, and adopted her. “I chose her because she would sit in my lap and look lovingly into my eyes,” says Barbara. “And I had no reservations about adopting a cat with ringworm, as it is a totally curable problem.” 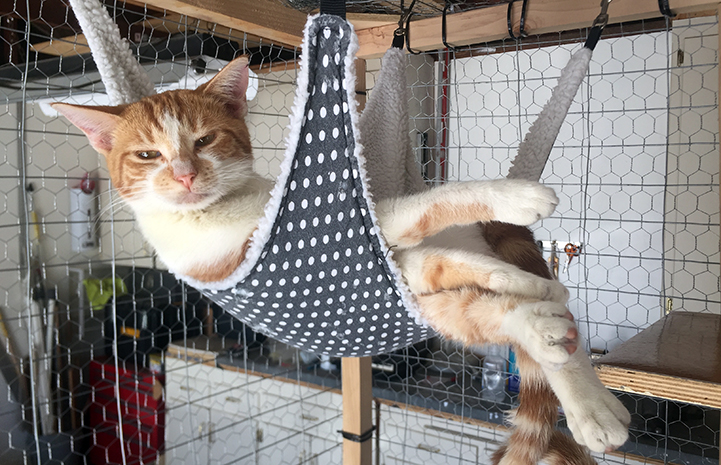 Recently, Cesaro’s test results revealed some very good news: His ringworm is gone. It likely won’t be long before an adopter chooses him to go to a new home and begin a new chapter in his life. And now that Cesaro has “graduated” from one area to the other, there’s room for another cat to come in from the city shelter and get the same special treatment that helped clear up Cesaro’s ringworm.

Every treatment, every foster home, every adopter makes a difference in saving a life. That’s what it means to Save Them All. 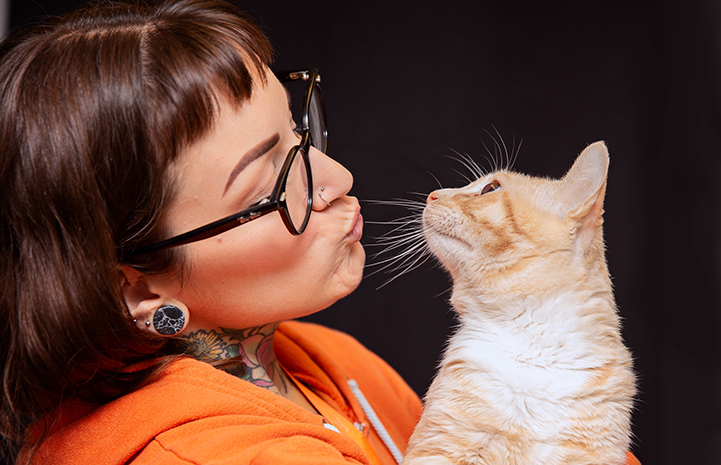