Image
Salt Lake County bans the retail sale of dogs, cats and rabbits in pet stores located in unincorporated areas of the county.
By Christina Green

There’s some added good cheer this holiday season for adoptable dogs, cats and rabbits in Salt Lake County, Utah. In the first such measure in Best Friends’ home state of Utah, the county council has voted to ban the retail sale of dogs, cats and rabbits in pet stores located in unincorporated areas of the county, unless those animals come from shelters or rescue groups.

The county had already adopted an ordinance to help stop puppy mills. That ordinance requires standards of care and licensing of breeders in the county, making it more difficult for unscrupulous breeders to operate.

With the Salt Lake County area leading the state in closing the door to puppy mills and those who do business with them, the hope is that more jurisdictions will follow suit and help pave the way to Utah becoming a no-kill state.

While broad support for the protection of animals exists throughout the state, actually passing ordinances that directly relate to pet stores has been a trickier affair.​

"Best Friends has encouraged several communities in Utah to enact retail pet sales bans, but because it had never been done in Utah, everyone was waiting for someone else to pass one to see how it plays out,” says Elizabeth Oreck, manager of Best Friends’ puppy mill initiatives. “Salt Lake County became the first, hopefully opening the door for others now that a precedent has been set.”

The power to ban retail sales of pets

One of the reasons for the success in Salt Lake County is Arlyn Bradshaw, executive director of Best Friends–Utah and a member of the county council, although he says council members were receptive to a pet sale ban from the start, since most of them had already taken action against puppy mills.

“The most significant support I received was from the council chair, who agreed to be my co-sponsor. He didn't need much convincing, as he already understood that puppy mills equal animal cruelty,” he says. “It seemed only logical that we would ensure that puppy mills in other locales could not utilize Salt Lake County as somewhere to sell.”

Citizen voices also played a significant role in the successful passage of the ordinance. Elizabeth says that the county council received some 1,200 emails from concerned citizens, thanking the council and advocating for the ordinance through Best Friends’ legislative action center, a national online clearinghouse for pending animal welfare legislation.

While these voices let politicians know what constituents care about, Elizabeth says the key to success is also acknowledging that the puppy mill issue isn’t limited to humane concerns.

“It’s not just about dogs suffering in mills,” she says. “It’s also a consumer protection issue — protecting constituents from buying sick dogs and getting ripped off. It’s a public health issue because dogs sold on roadsides and in flea markets usually aren’t spayed, neutered or vaccinated. And it’s a taxpayer issue because when cats and dogs end up in shelters, citizens subsidize the cost for their care, and often for the killing of those animals. That’s money that could be used on other things.” 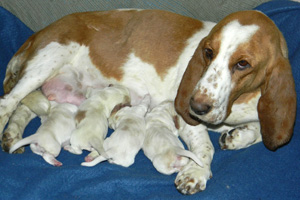 A win for pets and people

Peggy Chudd of Utah Friends of Basset Hounds, a No-Kill Utah (NKUT) Coalition partner in Salt Lake County, wholeheartedly agrees. She says many of the dogs who come through her group are owner surrenders, and not always in the best of health.

“It’s hard to tell who came from a backyard breeder or a puppy mill,” she says, “but between the two, a good three-fourths of the dogs have clearly come from an irresponsible breeder.”

She says quite a few momma dogs come to them so overbred that they need specially made “basset bras” to help them move more comfortably without dragging across the ground. Many dogs also come to them with their characteristically short, stubby legs deformed, a genetic defect caused by poor breeding habits.

Even though this new ordinance won’t stop breeding abuse outside of the county, it will make it a little harder to find legitimate places to sell the victims of this cruelty. That’s important, Elizabeth says, because even if brick-and-mortar puppy mills do not exist where you live, puppy mills still affect your community.

“You may not have mills, but you do have the byproducts of the mills. People may still buy puppies at the store, online or at a flea market, but you cannot know where those dogs are coming from,” she says. “So it affects everyone.”

As more communities across the nation follow Salt Lake County’s lead with retail pet sale bans, operating puppy mills will eventually cease to be a profitable venture, and adoption will become the preferred choice for adding a pet to the family.

Photos by Sarah Ause-Kichas and courtesy of Peggy Chudd