Saving a baby cat with no eyes

Image
Kitten with damaged eyes -- one eye was almost completely missing and the other was severely infected -- comes to the Sanctuary.
By Christelle L. Del Prete

Sophia’s tiny body becomes a dark tabby blur as she romps and tussles with her roommate, a black kitten a little younger than her. The two kittens have a lively wrestling match in their screened-in cattery until Sophia meows and darts through the pet door into her room.

That’s the signal to her playmate that he’s getting a little too rambunctious and she needs a break. It’s not that she can’t keep up with him. It’s just that she prefers a slightly calmer pace. She’ll happily play with him again — on her terms. Far from being a pushover, she’s earned quite a bit of admiration and respect in the few months she’s been living at Cat World. Why? It’s because she’s blind. 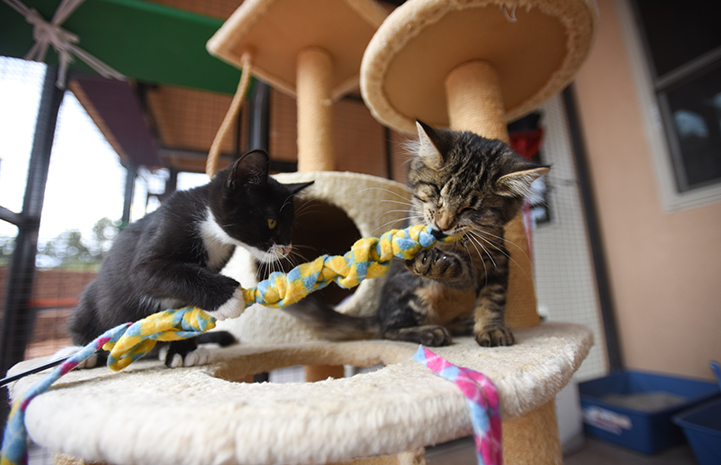 A rough start for a blind kitten

Standing outside of the cattery watching Sophia play and navigate the door flap, there’s nothing to indicate that she is any different from her roommate. “If you didn't know any better, you wouldn't know she is blind,” says one of her caregivers. Sophia has learned to feel, hear and smell her way through the world as amazingly well as a cat born without eyes.

It might have been better for Sophia if she had been one of those cats born blind — because, sadly, this little blind kitten had a rather rough start in life. She was found as a stray when she was only five or six weeks old. She was in terrible condition, with some of the worst kitten eye deformities imaginable. One of her eyes was so damaged it was almost completely missing, and the other was so severely infected it was in danger of rupturing.

Eyeless kitten comes to the Sanctuary

Sophia ended up at an animal control shelter in Atlanta, Georgia. Even though she was seen by a veterinarian right away, the damage had been done. Sophia had surgery that would leave her eyeless but much healthier and, for perhaps the first time in her life, completely comfortable. As soon as she recovered from the surgery, Sophia was brought to the Sanctuary, where she began a new chapter in her life.

When she arrived in Cat World, Sophia was still only nine or 10 weeks old. It didn’t take her long to adjust or to impress her caregivers. Now, at four months old, Sophia is as curious and playful as any other kitten. She is bold and fearless when she’s exploring her world — a visionless wonder who gets around amazingly well.

Sophia has no problem finding her food and water bowls or the litter box. She can find and play with toys. And she can handle her energetic roommate with ease. After a short break, she bursts out of the pet door, back into the cattery, and pounces playfully on him. It’s proof that Sophia doesn’t have to worry about being unsighted, because being a blind kitty isn’t going to hold her back from anything in life including — one day — a home of her own

Help bring hope and healing to more animals like Sophia 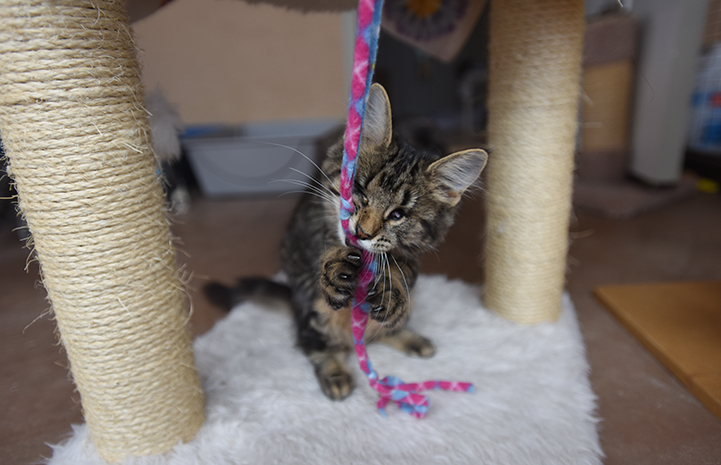