Image
Happy ending for a microchipped cat who was lost in Zion National Park. Read her story.
By Christelle L. Del Prete

When Bentley disappeared, Alex Carr didn’t know if she would ever see her sweet cat again. And as the first few frantic days of searching stretched into months of waiting for him to turn up, she began to despair. But a good Samaritan, a microchip and a short stint at Best Friends Animal Sanctuary helped Bentley find his way home to a shocked but incredibly grateful family. 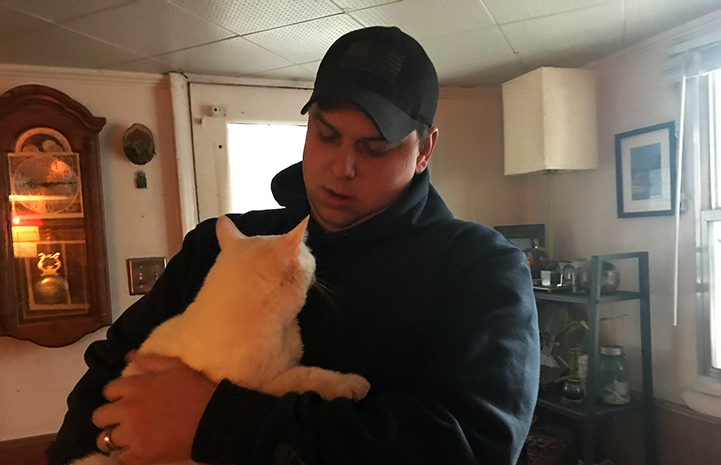 Last July, Alex was celebrating her birthday on vacation in Utah’s Zion National Park. Alex, her husband Chris, their four furry family members (three cats and a dog) and Alex’s mother were staying at one of the park’s campgrounds. After a morning hike with the dog, Alex and her mother were relaxing and playing cards on the picnic table outside the RV, while Chris was still sound asleep inside. Alex knew something wasn’t right when she saw her cat, Oakley (who had been secured inside the RV with the other cats), stroll casually past her.

Though Alex was able to scoop up the cat and put her safely back inside, she noticed that a screen had been pushed out of one of the windows of the RV. Worse, one of the cats, Bentley, had disappeared. For days, the family searched relentlessly for him, combing the campground and all the surrounding areas of the park, but Bentley was nowhere to be found.

When the vacation ended, the family had no choice but to return home to northern Utah. Alex was brokenhearted. She left information about Bentley and the family’s contact information with park rangers and at the campground, and hoped for the best.

What to do if your cat is lost

Lost cat finds his way to the Sanctuary

When months passed with no word, Alex wondered how Bentley, who had been her pampered pet since she adopted him in 2014, could ever survive alone outdoors. “He’s a pure white cat and he had no survival skills,” Alex said. Understandably, she feared the worst. What happened next was the best thing that could have happened.

Rick Coughlin works at a ranch with cabins and lodges that is located just outside of the park’s east entrance. One evening in the on-site restaurant, Rick overheard one of the guests talking about a cat that looked lost showing up at her cabin. The woman had been caring for the cat during her stay, but she was heading home to Austria so she could no longer do so.

Although Zion National Park is a beautiful paradise that attracts visitors from all over the world, it’s no place for a homeless cat. Rick, who has an affinity for cats as well as two cats of his own, decided to help by contacting Best Friends. Soon, Bentley was at the Sanctuary, located about 25 miles from the park.

What to do if you find a lost cat or dog

When Bentley arrived at Best Friends, he was given a veterinary exam (like all new arrivals). Though he’d been alone in the park for months, he was in remarkably good health. He was a little underweight, was treated for fleas and ticks, and scanned for a microchip.

Benefits of getting a cat microchipped

There was good news: Bentley had a microchip. Microchipping your cat or dog will greatly increase the chances that your pet will be returned to you quickly if lost. Registering your pet’s microchip (and keeping that registry information up to date) ensures that someone can reach you if your pet is found.

Bentley’s microchip wasn’t registered, so no one could tell at first that he was Alex’s beloved cat. But Heather Purdy, a Best Friends vet tech, decided to do some sleuthing. Since microchips are sold in batches, she contacted the manufacturer of the microchip to find out where that particular batch had been sold. It turned out to be Friends of Cats, a California organization that belongs to the Best Friends Network, so Heather made the call. 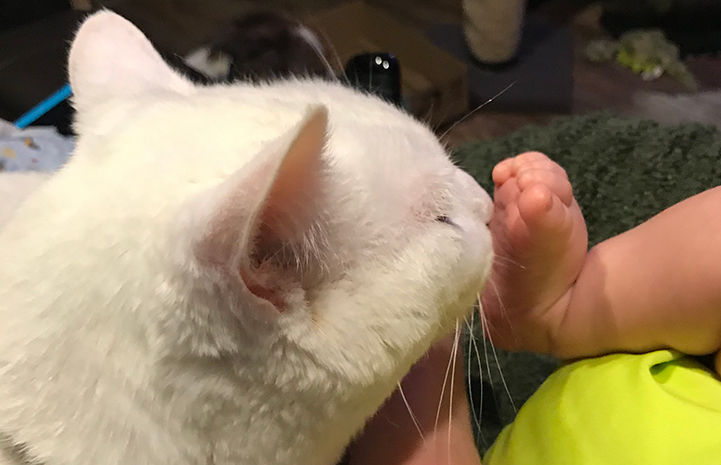 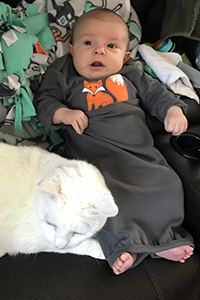 “They found the adopter’s information and even offered to send someone to Best Friends to pick up the cat and take him back to the rescue organization if his owner didn’t want him anymore,” she says. But Alex (who once lived in California and now lives in Montana) absolutely wanted her cat back and was shocked to learn he’d survived for so long in the national park and thrilled that he’d been found.

“When Best Friends called me, I immediately started crying,” Alex says. “I thought I'd never see Bentley again. I called Chris and he was in tears, too. We just couldn’t believe it.”

A transport was soon arranged to pick up Bentley at the Sanctuary near Kanab, Utah, and transport him to Salt Lake City, where Chris would go to pick him up and take him home to Montana.

Now that Bentley is home, Alex says he is back to his normal self — with one exception. These days, Bentley has a new best friend and family member. “We had a baby since Bentley went missing,” Alex explains. “He loves the baby and cuddles up with him.”

That’s a happy ending the whole family can celebrate.