Tony the Pony, as he’s lovingly called at Horse Haven, survived a harsh and difficult life as a pack horse on a reservation south of the Grand Canyon. When he was finally rescued and brought to safety at eight years old, his body needed plenty of healing and TLC. But it was his trust in people that truly needed resuscitation.

After their rescue, Tony and 10 other horses were brought to safety at the Coconino Humane Association in Arizona, a Best Friends No More Homeless Pets Network partner. Because he had so many physical and behavioral challenges, Tony stayed there longer than most of the other horses. A full year after he arrived, Tony still didn't want anything to do with the people who were trying to help him. He refused to let them touch him and would either run away or kick in self-defense if they got close. 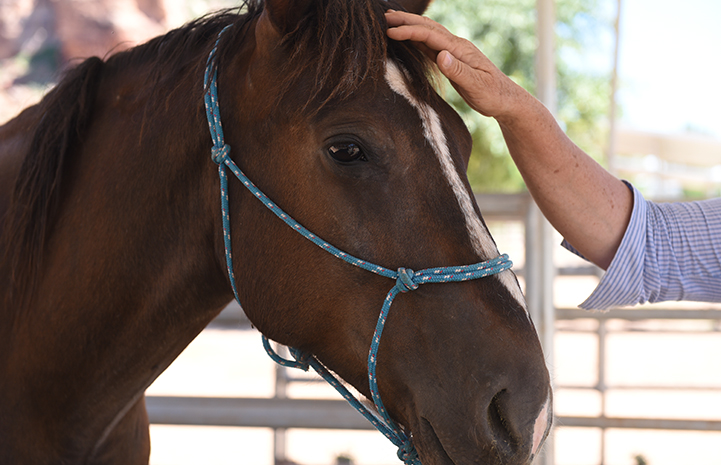 Although Tony was healing physically at the shelter, mentally and emotionally he still needed a lot of help. So he was brought to Horse Haven at Best Friends. With the gentle guidance and experience of trainers and caregivers used to helping horses who’ve survived tough situations, Tony was in capable and caring hands.

After only a few weeks at the Sanctuary, Tony started to come around. Horse Haven trainers and caregivers were patient and started playing Parelli Natural Horsemanship games with him. Parelli is the preferred horse training method at Best Friends, and it’s worked wonders with frightened horses like Tony. 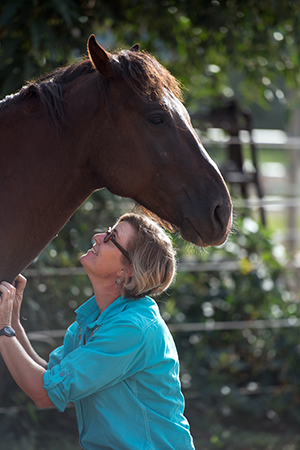 Although he was very good at chasing people away, ​Tony let trainer Linda Alvey get closer and closer to him until, finally, she was able to slide her hands under a halter he’d been wearing for nearly a year. When she removed it and began to gently stroke Tony’s face, he didn’t resist.

When the halter came off, it must have been quite a relief for Tony. It was also a very big leap of faith. In that moment, Tony signaled that he was ready to let go of his old life and to begin a whole new chapter.

Since then, Tony the Pony has been on a healing path, and he’s not turning back. He’s built a solid relationship with Jen Reid, Horse Haven manager and farrier, and now he trusts her enough to let her trim his feet.

In fact, Tony’s first hoof trim at Horse Haven was “at liberty,” which means he wasn’t wearing a halter and wasn’t tied to anything. If he wanted to, he could leave at any time.

“I chose to work on him at liberty because, with some horses like Tony who have a history of being forced to be defensive around people, the halter can actually make him feel a bit more claustrophobic and contained, and therefore more likely to strike out or kick to defend himself,” explains Jen. “When he is at liberty, that can actually take off some of the perceived pressure and not trigger those self-preservation responses.”

When a horse is at liberty, it’s also a huge test of the relationship between him and his handler, as well as a good indication of the amount of confidence in her and in himself. 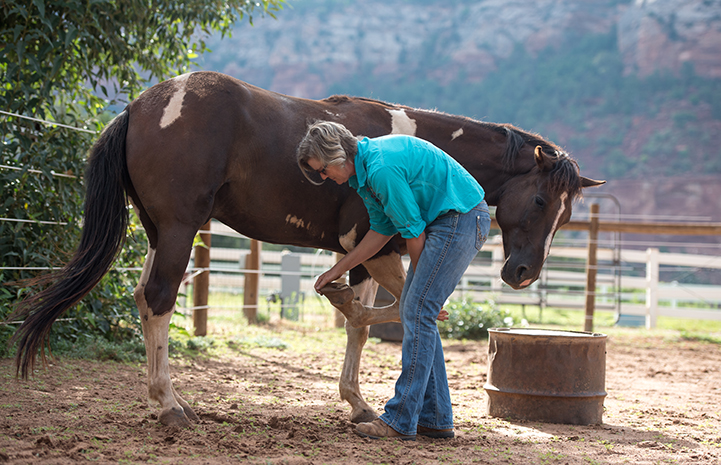 A happy horse at last

Tony was free to choose. He could simply have walked away, but instead he chose to stand calmly while Jen worked on his feet. And he seemed genuinely curious and relaxed rather than afraid. It was an amazing change for a horse who was untouchable just a few months before.

Every day, Tony gets braver. He often goes out and about on walks with Jen (wearing a halter and a lead), and he’s beginning to trust people a bit more each day. Besides an old injury to one of his back legs, he is physically healthy. And, because his faith in people has been restored, Tony is a happy horse at last. 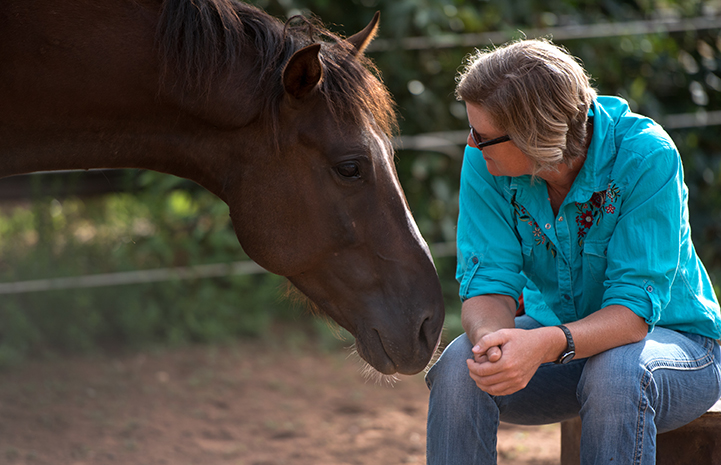