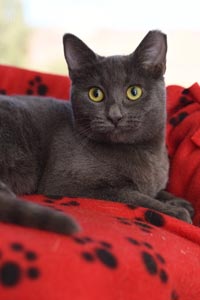 Four-month-old Sansa was brought to the Best Friends Animal Clinic for a simple spay surgery, but what she received was no less than a real chance at life. Born as a community cat in a rural trailer park, she and her fellow felines found themselves in dire straits when the person who took care of the colony moved away. That’s when team members of the Best Friends Four Directions community cat program stepped in to provide much-needed community support.

The first step was to trap, neuter and return (TNR) the cats so that the population wouldn’t keep growing. Like the others, Sansa was scheduled for release after being spayed. But as it turned out, her visit to the clinic revealed a life-threatening condition that, had she not been trapped and brought in to be spayed, would never have been treated.

Something just didn’t seem right with the little grey kitten. She was dehydrated and lethargic. Since it wasn’t safe to release her in that condition, Sansa stayed at the Best Friends Animal Clinic, where the veterinary team could keep a close eye on her.

In the best of hands

That was the first of two lifesaving medical choices for Sansa. Blood tests showed high toxin levels in her kidneys — something that’s common in older cats going into renal failure, but rare in kittens. For some reason, Sansa’s kidneys weren’t filtering her blood properly. As a result, toxins were building up and making her sick.

For the next few weeks, Sansa spent her days in the Best Friends Animal Clinic, where she was given IV fluids and more blood tests. In the evenings, she went home with Janice Dankert, community cat program supervisor. She was in the best of hands and had round-the-clock care, but she wasn’t getting any better.

Instead, her condition became critical, and Sansa’s veterinarians and caregivers began to fear the worst, even as they rushed to save her. But there was one more lifesaving measure they could try — a blood transfusion. And that, says Janice, didn’t just save Sansa’s life. “It was like turning on a switch.” 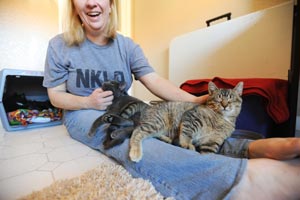 With the toxins flushed out of her blood and her kidneys working again, Sansa was no longer too sick to enjoy being a kitten. Except for checkups and blood tests, she started spending a lot less time at the clinic and a lot more time at her foster home, where she gets to do what she loves most — play with other cats and cuddle with people.

“We are treating her like a normal, healthy kitten now,” Janice says. Sansa will continue to be closely monitored by the veterinary team, who will determine whether she’ll need ongoing special care, or if she’ll be able to stay healthy on her own.

The chance to grow

Sansa may have a shortened life span, but every year that she gets to cuddle and play is a lot more time than she would have had if she’d never been trapped and brought to the clinic for her spay surgery.

Now, Sansa will have the chance not only to be a kitten, but also to grow into a cat and to find a loving home. And, thanks to everyone who has supported her along the way, she will have the opportunity to do just that.