Image
Rescued poodle mix has a severely injured leg that requires amputation. Afterwards, as she is healing physically, she also gets help for her shyness.
By Christelle L. Del Prete

Harriet is a little dog who has faced some big hurdles in her life. First, she needed help with a major injury, but that was only the beginning of what it would take for her to truly feel good. Once she was physically well again, the real work began. For that, Harriet would need help at Best Friends from many people, and even some other dogs.

The miniature poodle mix was about three years old when she was found as a stray in a community not far from the Sanctuary. Animal control personnel brought her to the local shelter, but she couldn’t stay there. Poor Harriet had a badly hurt leg, her curly coat was matted, and she was terrified of people. It would take quite a bit of work to get her ready for a new home. So she was brought to the Sanctuary for help and healing.

It turned out that Harriet’s leg was too badly injured to save it, and so she had surgery to remove the limb that caused her so much pain. With her matted hair shaved following surgery, Harriet soon was on the road to physical recovery. But even though she felt better and began adjusting to life on three legs, she still had a long way to go. She would need a different kind of care to help her overcome an overwhelming fear of people.

No one knows what Harriet’s life was before she became a stray. But it’s clear that she didn’t have very much experience with people, or that her past experiences weren’t very positive. She was terrified of people and wouldn’t let anyone touch her for any reason.

Harriet’s caregivers worked hard to gain her trust and gradually, she began accepting treats from them and allowed herself to be leashed up for short walks. That was a step in the right direction, but it was only the beginning. Helping shy dogs feel comfortable around people takes a lot of help in many forms, and soon Harriet was immersed in activities to help her come around to the idea that people are good ― not scary.

To start, Harriet was paired up with two friendly dogs, so every time someone comes near, she can see how much her two canine buddies love people. Duffy and Moe have shown Harriet the way along Dogtown’s trails, as well as on trips to the dog park. She passed a major milestone when she took one tentative step, and then another to follow Duffy and Moe into the kitchen where they live. Though that may sound simple, just stepping over the threshold into the unfamiliar room was a leap of faith for her. 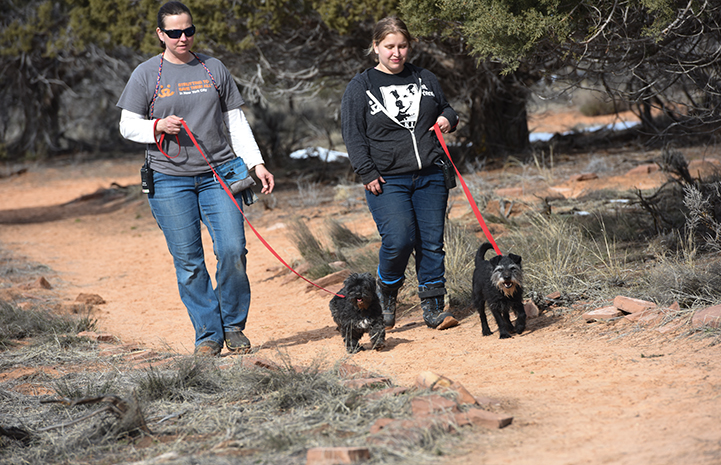 In the past few months, Harriet’s circle of friends has expanded. When she first arrived, she only trusted a couple of caregivers. But now she’s befriended some new caregivers. While it took her a little while to warm up to them, she’s now taking treats from their hands.

One of Harriet’s best moments yet happened recently in the dog park. Dogtown caregiver Jess Cieplinski took Harriet and her roommates there for a play session and let them off leash in the securely fenced area. “Harriet followed me all around the dog park,” Jess says. “Since she was off leash, she could have had the whole park to explore. But she chose to go wherever I went.”

“You can see that she wants to be friends with people,” Jess says. “She's trying so hard to get up the courage.” Harriet still has a few miles to go, but the little dog has already covered quite a bit of ground.

Until she has a home of her own, she’s learning what it’s like to enjoy a full and joyful life. It’s a big change for a little dog, but she’s taking every step in stride ― even on three legs.