When Pan came to Best Friends after his person died, he was terrified and no one ever expected to find him curled up and purring on someone's lap
By Sarah Thornton

Change can be scary, especially if you don’t understand what is happening. For Pan, who had lived his entire life in one place with both human and feline family members, a change had turned his world upside down. When his person died, the family couldn’t take care of the cats left behind.

Not all the cats, who had mostly lived outdoors, were used to people. But Pan and one other, who had spent much time indoors with their people, were affectionate. The family wanted to give them the best chance at finding a new home; however, when they arrived at Best Friends Animal Sanctuary, it was hard to imagine that either of them had ever been comfortable with people — especially Pan. 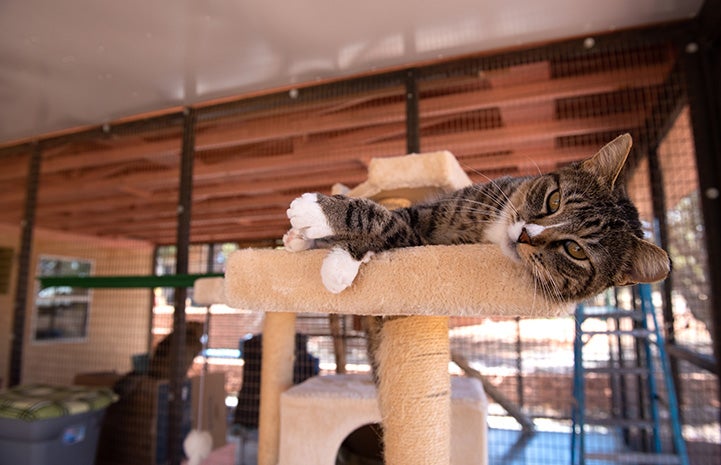 It was scary for the cats — suddenly in a strange new place with smells they’d never smelled and people they’d never met. They’d lost their family and had no idea what was going on.

It’s not unusual for cats to be completely different than they were in a previous home, or for them to change once they’ve settled into a new place. But Pan’s behavior was extreme. He lashed out. He growled and swatted while crouched in a corner and glared at anyone who walked by. He darted out of his kennel and scaled the walls, trying to get through any window he could find. He acted like a feral cat who’d never been around people.

“I think of myself as someone who can handle fractious cats pretty well and have been around unsocial cats all of my life,” says Pat Banman, a team lead at Cat World. “He might have been the most difficult cat I handled.”

Pan was moved to his own room, blankets covering the front of the kennel and the lights turned off to help him feel more secure. There were thick gloves on hand for feeding time, in case he tried to attack and bite. Interaction was kept to a minimum to reduce stress.

He was so scared that they had to sedate him for his initial intake exam. It was quickly looking like Pan’s best option would be placement as a barn cat, which would allow him to live his life away from people but still be protected and cared for.

It turned out, though, that all Pan needed was time. 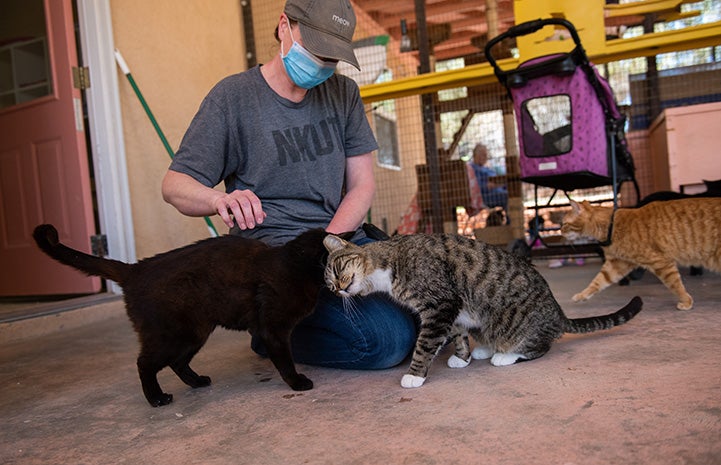 Scared cat comes out of his shell

When Pan was moved into one of the buildings at Cat World, Pat says he thought for sure he wouldn’t see him much. “He would find a spot to hide and stay away from us,” he says. But then something unexpected happened: One day when he walked into Pan’s room and saw the caregiver sitting on the floor spending some quality time with the cats, Pan was in her lap.

“She had no idea that Pan was considered one of the most unsocialized cats in the room,” says Pat. Sitting comfortably in someone’s lap, Pan was completely different. He wasn’t the same cat requiring people to wear thick gloves when they fed him. He wasn’t the cat who growled and glared when anyone looked at him. 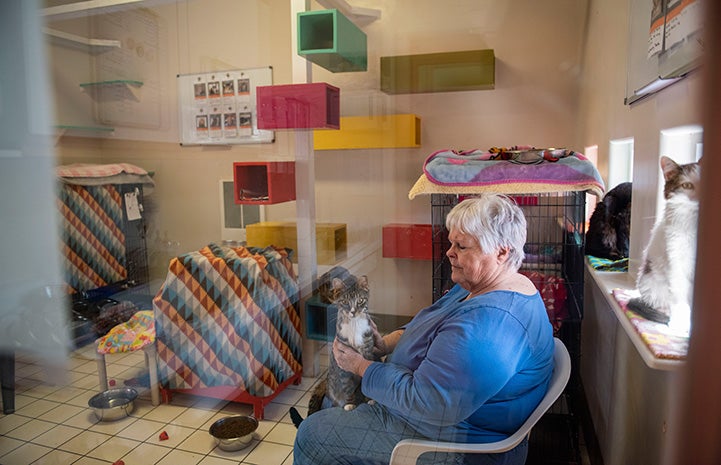 Pan was finally with other cats in an open space with plenty of escape routes and hiding places. He had time to watch people come and go from a distance, time to run away when he was scared, and time to make friends with his feline roommates. He was able to decompress and be in control of his interactions with humans, and it made all the difference.

“Prior to this, he had the occasional time when we were able to graze by him for a quick pet, but nothing else,” says Pat. Even with the apparent breakthrough, it would be several weeks before Pan showed that much affection again. He’d accept a pat here and there, but when it became too much he would dart off again.

Once Pan was comfortable and decided the new people around him were OK, Pat says he became an entirely different cat. “He is loving and even seeks out attention.”

These days, it’s no surprise to see Pan stretched out, lounging on a cat tree in the sun or swatting a toy around. He will happily trot over when a human friend calls out to him and plop directly into a lap for some snuggle time. He still gets spooked when there’s sudden unexpected movement or a loud noise, but he’s clearly not the terrified cat who first arrived. People no longer think he’s a feral cat or that he’d be happier alone in a barn.

Just like many other cats who end up in shelters, Pan was just scared and needed time to feel comfortable. Here at the Sanctuary, he’s had that time. The friend he arrived with has already been adopted and gone home. And now it’s Pan’s turn.

“Since he was so shy, he will need someone who allows him time to adjust and realize all is safe again,” says Pat. “He deserves to have a home again.”

Join Best Friends and give more pets a chance to shine 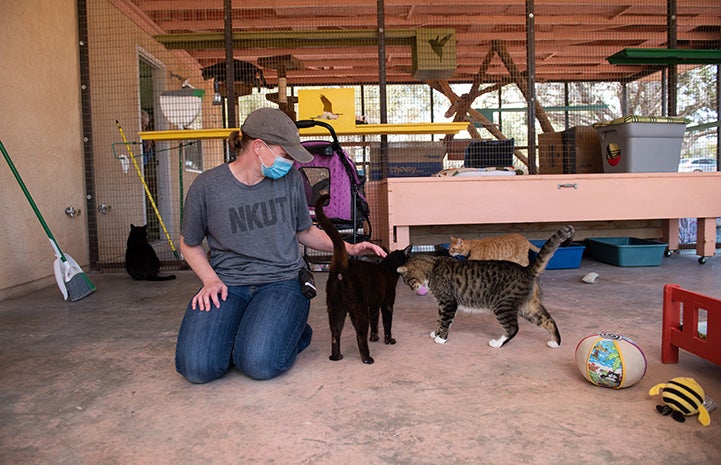