Image
Scared shelter cat acts unsocialized, so is put in the working cat program to be adopted as a rodent deterrent feline. He isn't truly feral though.
By Nicole Hamilton

When a young black cat ended up in a Los Angeles Animal Services (LAAS) shelter after he was found living on the streets as a stray, he didn’t feel much like socializing with people. Instead, he backed away from anyone who tried to come near him, as if trying to make himself invisible. The last place a cat unsocialized to people should be is in a shelter, because not only is it terrifying for the cat, people don’t go to shelters looking to adopt cats they can’t even touch.

Unfortunately, most cats who are unsocialized to people are killed if they end up in a shelter. But LAAS partners with Best Friends as part of our No-Kill Los Angeles (NKLA) initiative, and that means the black cat had another option, one that would save his life. 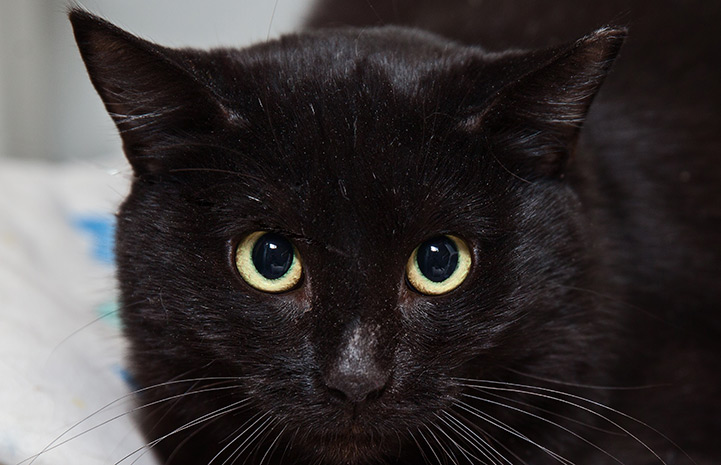 Best Friends’ working cat program in Los Angeles was created just for cats like the scared black cat, who was named October when he came to the Best Friends Pet Adoption and Spay/Neuter Center there. The center has a special enclosed outdoor area where cats who are truly unsocialized to people are safe, cared for and otherwise left alone, which is just how they like it, until adopted into a different kind of home.

Those homes are in barns, warehouses, garages and other enclosed areas where cats are cared for by their adopters every day, but not expected to be cuddly lap cats. In return, their adopters get excellent rodent deterrents.

Even though October left the city shelter to join Best Friends’ working cat program, it turned out he’d been hiding his true colors all along, and that meant a different plan was in store for him.

A cat lets his guard down

The working cat area at the center is fully enclosed and filled with dozens of hiding places so cats can hide whenever they need to. It’s designed so the cats aren’t stressed out by too much contact with people, and so they can live in comfort without being scared, until they get adopted through the working cat program. But all cats first spend a few days in a quarantine area at the center before moving to the working cat area. And that’s where staff are often in for a surprise. That’s what happened with October.

Even though, at the shelter, October had seemed like he was truly unsocialized to people, within a couple days of his arrival at the Best Friends center, staff started to catch glimpses of a sweet and curious personality that was getting eclipsed by his fear of being alone in a new place. Every day, he grew a little more confident.

As Samantha Bell DiGenova, cat behavior and enrichment lead at the adoption center, watched October, she got a good feeling that he was more lap cat than he’d let on. 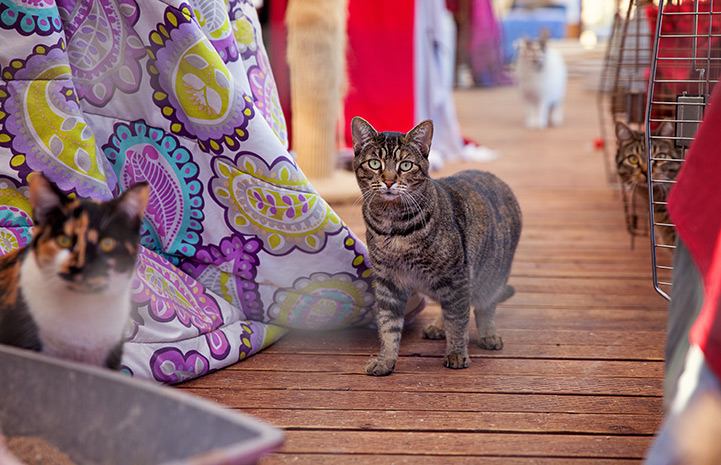 Most cats like October, felines who are brought into the city shelter after being found on the streets, have a past that is completely unknown, which makes it difficult to tell whether they’re truly unsocialized to people or simply frightened house cats.

“An unsocialized cat just wants to be invisible to humans, so his body is usually tense and flattened, and they tend to be very quiet,” says Samantha. “Frightened house cats are very upset with the situation they’re in, so they tend to be more vocal and demonstrative by growling and spitting. But there are always exceptions.”

October was one of those exceptions, because his response when scared was to be quiet as a mouse. Samantha says, “Since we started the working cat program, we’ve had a couple dozen cats whose true personalities emerge once they get comfortable here, and it turns out they aren’t unsocialized to people after all.”

In fact, about 30 percent of the cats Best Friends in L.A. has taken in for the working cat program from Los Angeles Animal Services don’t end up in the working cat area at all, because immediately upon their arrival at the center, they start to relax and show that they’re not unsocialized. They’re just scared.

When cats show signs they’ve been misidentified as unsocialized to people, it often just takes some extra patience, playtime and love to bring them around to their true selves again after the trauma of ending up in a shelter.

That’s how caregivers at the adoption center helped October, working with the young cat until he grew increasingly comfortable with them. Soon, October felt confident enough to play with wand toys and with the other cats in his adoption room. Turns out, October really likes other cats — and that was about to work to his advantage.

“He was just what I was looking for”

When Lauren Markland visited the adoption center recently, she knew she wanted to adopt a young male cat, and preferably a black one. It was also very important that the cat get along with other cats, because there were already two in the house she was sharing with roommates.

Lauren spotted October soon after she arrived, and when she came over to get to know him, he warmed up to her quickly. Soon she was filling out adoption paperwork, and October was on his way to his new home.

These days, October — now named Viago — is enjoying an early retirement on Lauren’s couch. And since he doesn’t have a job through the working cat program, he has more time to convince the kitten he lives with that he’s a nice guy.

Lauren was surprised by how much the Best Friends team practiced with Viago to get him ready for the big day when he’d finally go home. “They gave me a dossier on him,” she says. “But it made me more confident that I was making the right decision. And I think I have. Viago is very good-natured. He was just what I was looking for.” 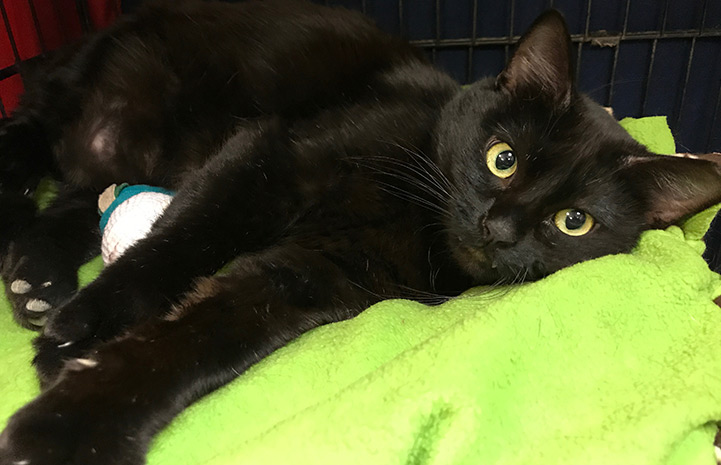