Don’t let her size fool you. Little BoPeep has one big personality. In fact, far from being sheepish as her name might have you believe, this pint-size pup was kind of intimidating. She took stranger danger very seriously and, of course, at first everyone is a stranger. BoPeep let them all know with her loud barking, lunging and snapping that they should all stay away. Needless to say, she quickly earned herself a reputation.

Like many dogs with feisty reputations, BoPeep was just scared and trying to protect herself and her space by doing what she knew worked. It would take time, patience and a lot of love (as well as plenty of treats) to let her know she was safe and that she could relax and open up to the people around her. Then she’d become the dog everyone wanted to win over. 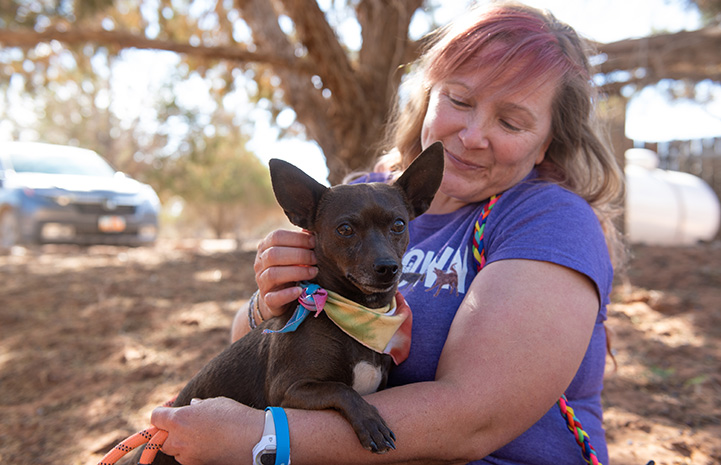 BoPeep’s first time at Best Friends Animal Sanctuary was supposed to be just a one-night pit stop on her way to some place where she would quickly get adopted. Though she was nervous in her new surroundings, her medical exam went well. And after some defensive snapping followed by quiet reassurance, she even cozied up to one of her caregivers.

When BoPeep reached her next destination, however, her defensive and reactive behavior became more obvious. She wouldn’t let anyone into her space and caregivers had to utilize barriers to feed her and special grabbing tools to reach her leash. It was a stressful situation for everyone involved. With BoPeep trying to scare everyone away, it looked less likely that she would be adopted quickly. And it was clear she needed special care to decompress and get comfortable, which would take a while. So, she returned to the Sanctuary to try again.

[People thought this cute little dog was mean, but he was just afraid of everyone]

Cassie Rowell, a caregiver who spent time with BoPeep during her initial stay, was quick to welcome her back. But the little Chihuahua didn’t want visitors. As soon as Cassie stepped into her room, BoPeep charged. And she reacted that same way to everyone.

In order to safely care for her, caregivers tried several different setups. She had to be kept outside while they cleaned her space and fed her. If they had to go in with her or take her on walks, they wore tall boots. And still, whenever someone got near, she’d lunge, grab the fencing and try to pull on it, barking the whole time.

“She couldn’t be handled,” says Cassie, accepting the situation but remaining undaunted. “I was determined that she was going to love me, that we were gonna get her over that hump.” 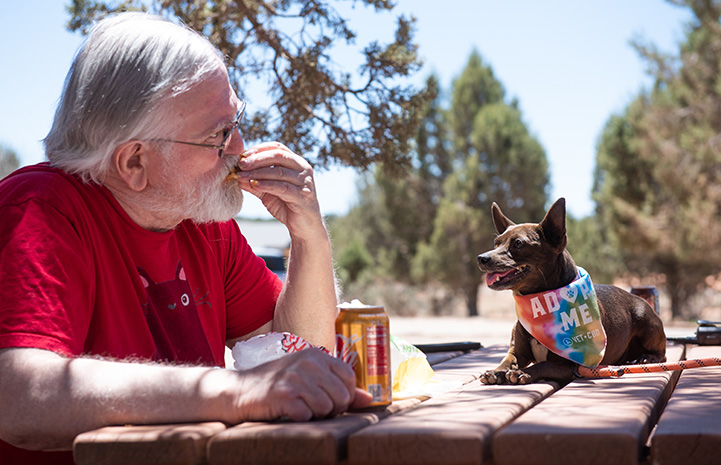 Winning over a reactive dog

A quiet waiting game of making friends with BoPeep began. The first step was getting her started on behavior medicine. This would help take the edge off her nerves and get her in a place where she could handle being around people a little bit better. Then, it was just a matter of hanging out nearby and quietly letting her adjust at her own pace.

[Grumpy, toothless min pin finds a family who loves everything about him]

Over and over again, BoPeep’s caregivers repeated the same song and dance, which was to settle nearby with a quiet activity and wait until she had calmed down. Eventually, BoPeep started to realize that they weren’t so scary. No one was going to hurt her or even make her interact if she didn’t want to. They even brought her yummy treats. “She really came around,” says Cassie. “We just won her over and she stopped being scary with us.”

Once BoPeep was comfortable with her regular caregivers, the world opened up and she soon discovered a love for rides in golf carts and cars. She started going on play dates with other dogs. She even visited Cassie’s home and, barely batting an eye, met her cats.

Soon everyone wanted to make friends with BoPeep. To help the little dog broaden her social circle, Cassie would put out calls on the walkie-talkie to other caregivers and ask people to come toss her treats. And people did, she says, “because we all love a challenge, and she was (that) at the time.”

Each day, BoPeep got better and better at meeting new people. As long as she was out of her room and didn’t have to think about guarding her space, new faces became potential new friends. After all, they might have treats. “Anyone that knew her then and sees her like she is now gets so excited when they interact with her,” Cassie says. A little lick on the hand from a dog who had once charged at them could make their day. 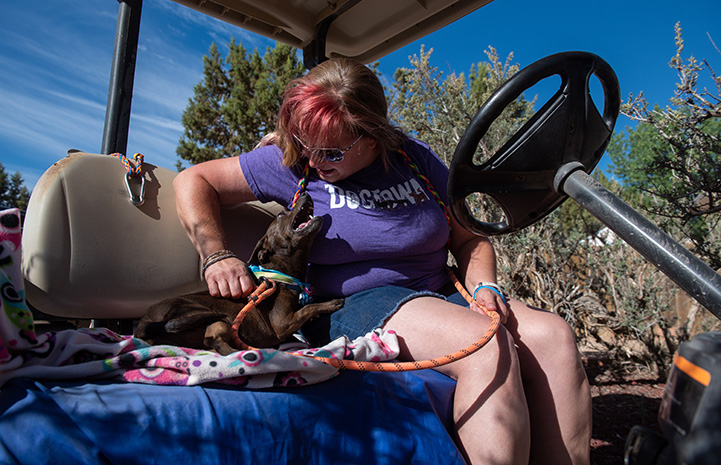 Instead of everyone being worried about whether or not BoPeep would be able to find a home, these days she’s meeting potential adopters and laying on the charm. It seems like the only thing she needs to worry about is being the only dog getting all of her people’s attention.

When asked to comment on her past behavior, BoPeep licked this interviewer’s face and quickly lay down on my voice recorder. Yeah, we think you’ll be just fine now, too, BoPeep. 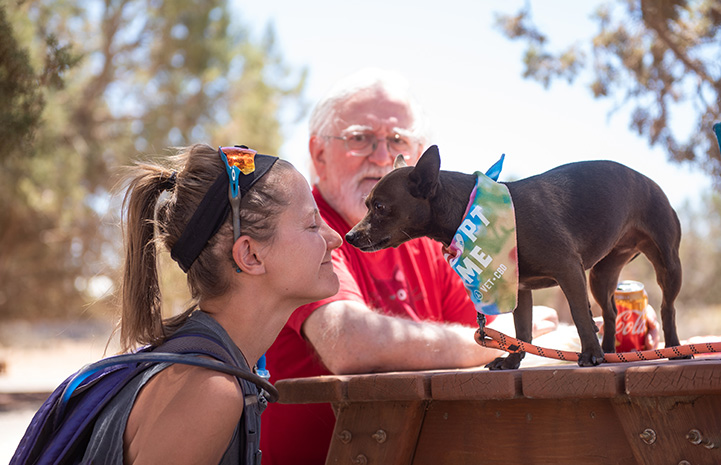 Open your heart and your home

Having friends and family can make a world of difference to a homeless pet. So, what do you say?