Image
Young boy who wrote about wanting a puppy has his wish come true. With her parents' permission, his sister adopts a puppy from Best Friends for him.
By Christelle L. Del Prete

When Julia Wickerath visited the Sanctuary on her spring break, her little brother Austin had just completed a writing assignment for school where he was asked what he’d do if he had to choose between a trip to Hawaii or a puppy.

Perhaps not surprisingly for an eight-year-old boy, Austin chose the puppy. “I would rather have a puppy,” he wrote, “because one week is way less time than having a dog for 12 years. You could also train a dog to do tricks. And if you’re the only boy in the family and your sisters aren’t home, you can play with the puppy.” Though Austin could not have guessed it at the time, his thoughtful and heartfelt explanation would plant a seed in his sister Julia’s mind and change his life.

Not long after Austin completed his assignment, Julia and nine fellow University of Wyoming students traveled to Best Friends in Utah to spend their spring break volunteering. During their trip, they volunteered in or at least toured every animal area on the Sanctuary, including Cat World, Bunny House, Horse Haven, Marshall’s Piggy Paradise, Wild Friends and Parrot Garden. But it was at the puppy preschool in Dogtown that Julia’s idea finally came to light: She would make Austin’s wish come true by adopting a puppy for him.

Of course, she first had to convince her parents that it was a good idea. Julia lives on campus at the University of Wyoming, while her family lives on a farm in Washington state. Although she would be able to help Austin raise his puppy during her school breaks and visits home, she wouldn’t be able to help provide the full time care a growing puppy needs. 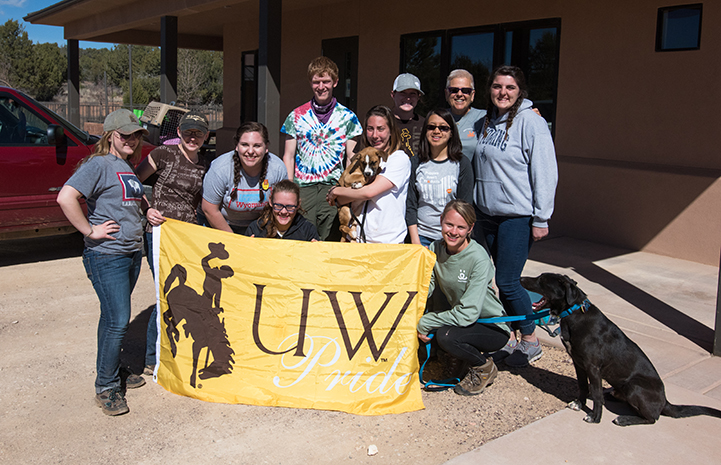 Luckily, her parents didn’t need much convincing to take on the challenge. The puppy that Julia chose happened to bear a striking resemblance to her father’s boyhood puppy. The adorable, fluffy pup — named Lattimer at the Sanctuary — also seemed like he might excel at search and rescue, which Julia’s dad has an interest in. It was settled. As soon as Lattimer was neutered and ready to leave Dogtown, he’d be on his way home to the little boy.

Meanwhile, on the same trip two of Julia’s classmates — Brittney Kupec and Heather Baker — weren’t planning to return to Wyoming empty-handed. And that led to not just one, but three dogs finding new homes within the college volunteer group.

Britney, who already had a rescued dog at home, had been searching for a good companion for about a year. She chose a handsome and social young adult dog that she named Jackson. Heather picked a snuggly, playful puppy she calls Cassiopeia, or Cassi.

While it does sometimes happen, it’s rare that students from college groups adopt pets during volunteer trips. As for three adoptions in one trip, Best Friends group coordinator Kris Kowal says, “I’ve worked here for four years, and this has never happened in one of my groups before.”

Volunteer with Best Friends in Utah or near you 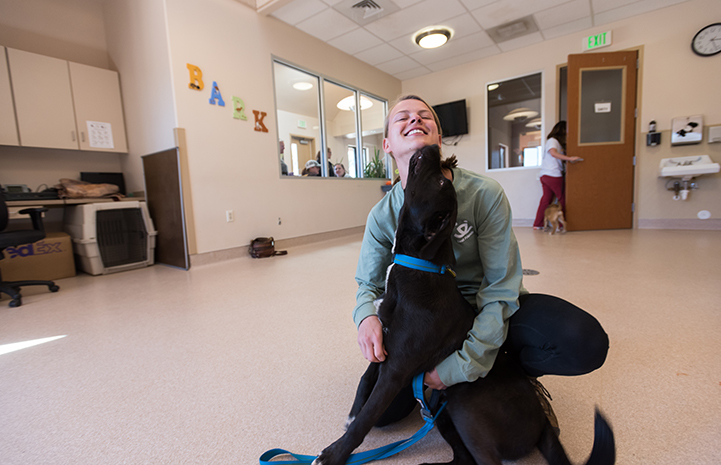 With spring break in the past and summer vacation coming up quickly, the pups have settled into their new lives. For the younger two, that includes lots of training. Cassi is enrolled in a puppy class and will soon graduate to the next level. Heather’s goal is for Cassi to become a therapy dog who visits people needing a little extra love. But even with all the training, there’s plenty of time for pampering. “She is spoiled beyond belief thanks to my two roommates, boyfriend and mom who help me provide the attention she deserves,” Heather says.

As for Lattimer and eight-year-old Austin, the two turned out to be a perfect match. Julia went home to Washington state for Easter weekend, arriving just in time to introduce her little brother to the puppy she’d picked out for him.

Lattimer, now known as Arrow, “ … has settled into our farm life very well. My little brother has been pretty inseparable from Arrow.” The pup has even accompanied his boy to baseball practice. While a trip to Hawaii would  have soon turned into a memory, Austin and Arrow are now best friends for life. 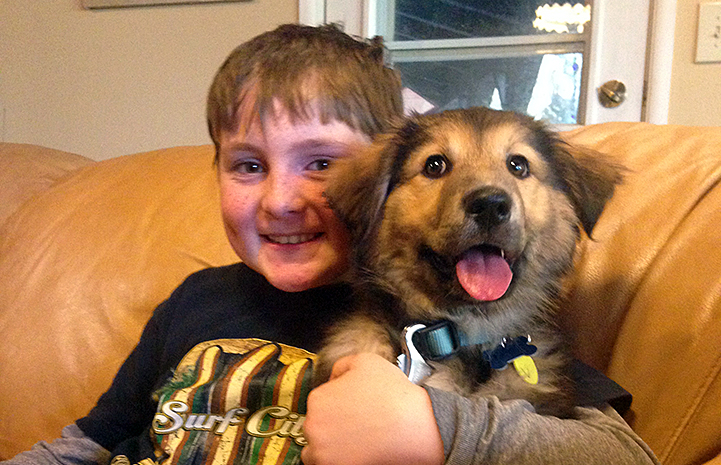