Image
Pitbull shows his adopted family his deafness is not the negative disability that many might think it is.
By Nicole Hamilton

Cary Fukui and Patrick Butcher were browsing the web, looking at dogs, when they came across a video of a fun-loving pit-bull-terrier mix available for adoption from Best Friends’ NKLA Pet Adoption Center in Los Angeles. They could tell from the video that Pogo was sweet, gentle and well-behaved ― just the kind of dog they were looking for. As they read through the description, they were surprised to find out that Pogo can’t hear, especially considering how well he understands cues.

All dogs and cats at the NKLA Pet Adoption Center are originally from either Los Angeles Animal Services or one of our NKLA coalition partners. The center is one way we’re working toward a No-Kill Los Angeles (NKLA), and every adoption makes it closer to a reality.

Still interested but a little tentative, Cary and Patrick made a plan to meet Pogo. A recent move from New York to Los Angeles meant they had something many New Yorkers covet: a backyard. They figured that, with an open mind and a little guidance from the team at the NKLA Pet Adoption Center, they could find a way to make that backyard Pogo’s very own.

As Cary and Patrick opened the door to one of the dog suites at the NKLA center, they immediately spotted Pogo, who was sitting patently in the first kennel, smiling at Cary and Patrick, even as the dogs around him barked and jumped with excitement. They wanted to spend some time getting to know Pogo, who already had made a great first impression.

“The staff at NKLA showed us how he can perform tricks and follow cues just by reading lips or through hand signals, which was pretty amazing,” says Cary. “We knew this was a very special dog, so we took the next step and adopted him.”

See how the NKLA initiative helps L.A. get closer to no-kill 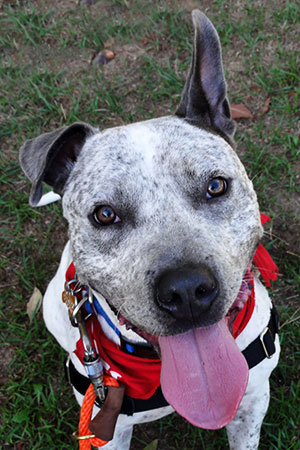 Pogo, now named Jinjo, waited seven months to find his new home. And Katie O’Shaughnessy, lead caregiver at the NKLA center, says that while some people may think adopting a dog who can’t hear would be challenging, in the case of many deaf dogs it’s quite often the opposite.

“He wasn’t bothered by all the chaos that would sometimes surround him,” says Katie. “So he had the advantage of being calm and collected when dogs around him were not.”

All dogs rely significantly on nonverbal cues to know how to behave ― especially Jinjo. He can sense how an approaching dog will react to him by watching facial gestures. He’s also a master lip reader with humans, and because he doesn’t hear other dogs barking, he doesn’t bark much either.

In fact, nothing holds Jinjo back from enjoying life, says Katie. “He loved going on hikes with volunteers. I’d say he was one of the goofiest, friendliest and sweetest dogs we’ve ever had at the center.”

Jinjo is loving his new home. He’s learning new tricks and even though he’s only learned to “roll over” halfway, he’s having fun trying to figure it out. In fact, Jinjo is feeling so confident in his new home that he’s even showing his stubborn side. Sometimes when he gets a hand command from Cary or Patrick, he’ll look away if he doesn’t want to respond. “He’s a real ham,” says Cary. “And he can be a bit of a drama queen, but we love it.”

While Jinjo is learning new things every day, he is also teaching Cary and Patrick a few things, including what it takes to be a good pet parent. “This is our first time being parents,” says Patrick. “So it’s really teaching us about responsibility. Now that we have Jinjo, we have to stick to schedules. You can’t be gone all day and night when you have a dog.”

Jinjo is also opening Cary and Patrick’s eyes to how often pit bull terriers are stigmatized. “Sometimes when we’re out on a walk, people see us coming and cross the street,” says Cary. “It’s too bad because Jinjo is just a sweet and kind dog.”

And, of course, Jinjo has shown them how rewarding and inspiring it can be to adopt a pet with special needs. “We were admittedly a little apprehensive about adopting a deaf dog, but it turns out it’s really not much different,” says Cary. “If anything, it makes us love him more.” 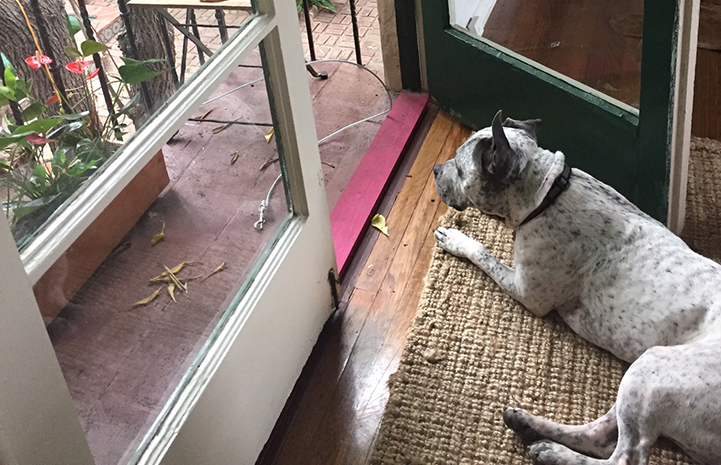