In his time at Best Friends Animal Sanctuary, the 15-year-old cat went on tons of sleepovers and made countless friends with his outgoing, talkative personality. Staff and volunteers alike were enamored with his overflowing affection. He even had a social media presence with his own dedicated Instagram account, @purrwilbur, where even more people got to know him through his pictures. But in addition to his ever-advancing age, Wilbur had a long list of health conditions: FIV, FeLV, a heart murmur and irritable bowel disease.

All of this contributed to the fact that no one had taken the next step toward bringing him home ― at least not until Michael Cox saw an Instagram meme with a disgruntled-looking Wilbur that read: “My name is Wilbur. I am 15 and it is September 15. Been waiting to go home since 2009. Where is my ride?” And just like that, the senior cat found a home.

Wilbur was left at a veterinary clinic in Arizona where he was diagnosed with both feline immunodeficiency virus (FIV) and feline leukemia virus (FeLV). Both viruses can make a cat’s immune system more susceptible to other illnesses, plus his other conditions dictate that he be on a special diet. Despite all that, he never let anything get him down and he was always full of purrs.

Because FeLV is easily spread to other cats, Wilbur first lived at a building specially designed for cats with the virus. He went on sleepovers and delighted in spending time with staff and volunteers. He even took over the laundry room, supervising the bedding to make sure everything came out nice and clean.

And then, one day, Wilbur tested negative for FeLV, which, though not common, is not unheard of, either. He would need more testing to determine if he was free of the virus, but until then he needed a place to stay to prevent him from catching it all over again.

So, he moved into the Best Friends marketing and PR office. He much preferred the quiet space, open lap access and private fenced-in area where he could safely enjoy the great outdoors. And like everyone else who met him, his new office mates fell in love. There seemed to be no end to his list of adoring human friends. 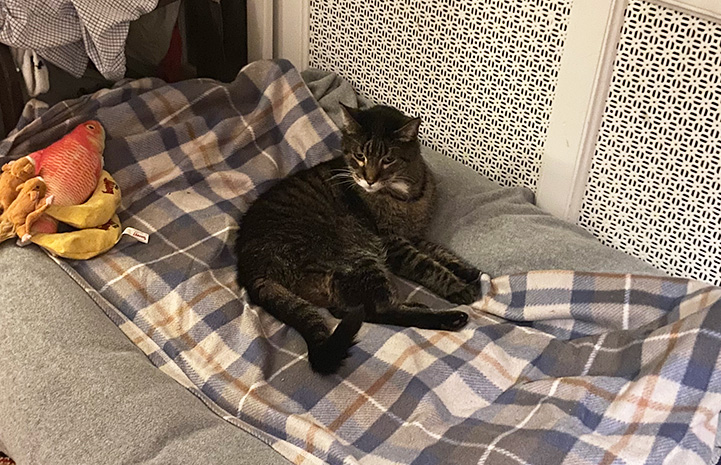 One of them, Barb Williamson, had the most personal experience taking care of cats with special medical needs at home. She took the lead, making sure he got all his pills and keeping close tabs on his overall health. When she noticed that he was looking rough, she alerted the veterinary staff at the Best Friends Animal Clinic and brought him in for an exam, which revealed that Wilbur’s kidneys were failing.

Failing kidneys, a not uncommon condition for elderly cats, would require that he be given regular subcutaneous fluids to stay as healthy as possible. But that wasn’t the last change to his medical record, and it turns out that good news was just around the corner. After follow-up blood tests earlier this year, veterinarians declared Wilbur officially FeLV-free. Now that he was negative, he could live anywhere, but with his advanced age and kidney failure, time was of the essence.

Social media helps find a home for an old cat

When Wilbur moved into the office, marketing intern Michelle Hardy set up his Instagram account. When her internship ended, Barb took over managing the account as his “publicist.” She regularly posted pictures of his daily life around the office and responded to all comments. Hundreds of people followed the “skinny old dude with attitude,” leaving comments full of encouraging words and heart emojis.

Then she made and posted a meme using a photo of Wilbur taken by volunteer Janice Reed ― one she describes as showing his “Elvis sneer.” It was quickly shared by dozens of other pet accounts, some of them very popular. And that’s how Michael found Wilbur.

“I remember I’d been painting my room and it was 2 a.m.,” says Michael, recalling the first time he saw Wilbur’s picture. “I don’t know if I was just really tired or something, but something about his face … that kind of screwed-up smile on the side of his mouth …  I just reached out.”

He sent a message of interest to Barb on Instagram, mentioning that he lived in Connecticut and asking if that would be OK. Because of Wilbur’s heart murmur, flying him to Connecticut wouldn’t be an option, but it turns out that Michael was planning on driving anyway. And so he did for a day and a half ― all to pick up one very special senior cat. 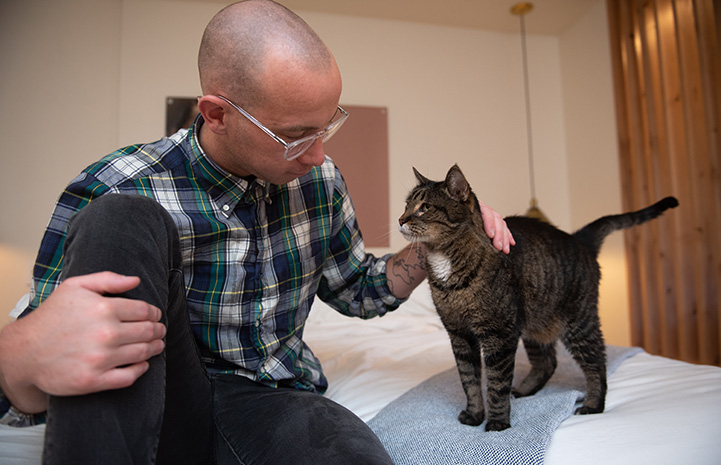 Michael and Wilbur stayed at Best Friends Roadhouse and Mercantile, and Barb came over in the morning to show him how to give Wilbur his fluids and pills.

“Let’s say he did a whole lot better than I did the first time I had to give Wilbur his fluids,” Barb says with a laugh. “When I was watching him, I was thinking he’s very relaxed. He’s very matter-of-fact.” When they loaded up for the drive home, Barb says it was like Wilbur had been waiting for Michael the whole time. And he was ready to go home. 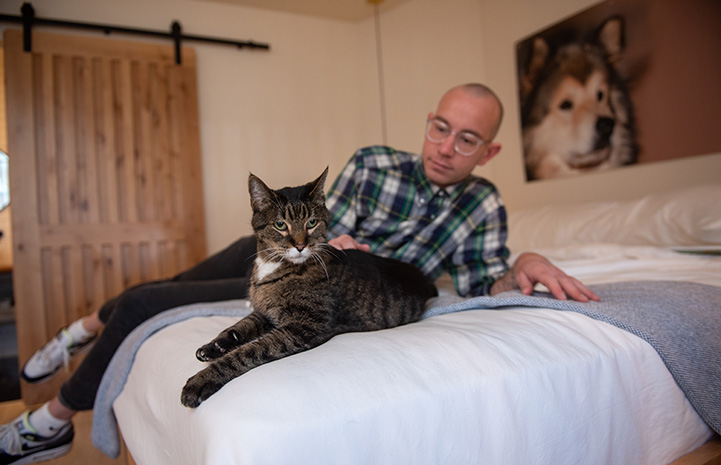 A home to call his own

Wilbur took the drive home like a champ. “This is not to be funny,” says Michael. “He really did. He did better than I did. I just spent more time worrying about him … He was fine.”

When they finally arrived home, Wilbur quickly settled in. “We started out in the basement — it’s a finished basement — but he’s slowly moving floor by floor, getting comfortable with (the house), says Michael. “I’d say we’re feeling pretty OK on the second floor. He wants nothing to do with the third, but he’ll get there, I’m sure.”

Wilbur’s also getting to know the rest of the family. While he prefers to spend his time with Michael, he’s not shy about asking for attention from his new human’s parents. Sometimes, he even tries to coach Michael’s dad while he’s working. 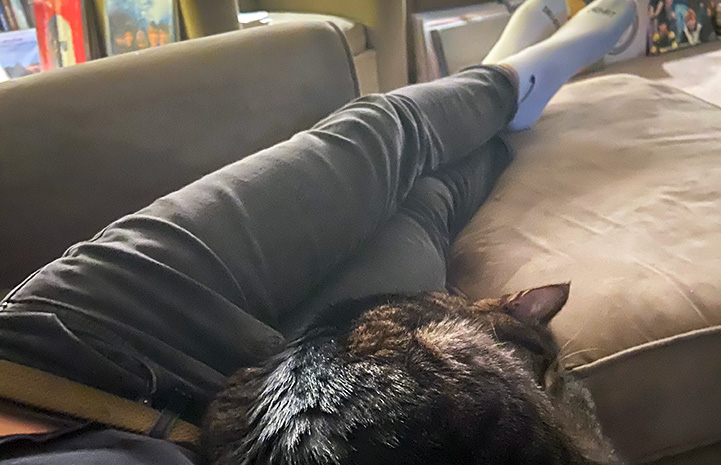 “He’s very talkative,” Michael says. “My dad will be working in the dining room or be on a call or something, and Wilbur will just be kind of yelling. I guess that’s a refreshing thing about animals. They don’t play by our rules. He’s a different personality. That in itself has been nice.”

[Johnsy the cat says FIV is no big deal, and so does his adopter]

Michael’s dad doesn’t hold the disruptions against Wilbur. Though he may laugh at his name a little, it’s all in good fun. “Wilbur is such an old man name,” says Michael. “I just imagine that one day Wilbur just kind of showed up. It’s hard to imagine a kitten named Wilbur ― like he only existed at 10 years old.”

With a new home and a family to love him, Wilbur is happier than ever before. He takes the kind of long, deep naps that only come with real relaxation, comfort and maybe a bit of age. But when he’s awake, he’s as lively as a cat half his age. And for whatever time Wilbur has left, Michael plans to make it the best time of his life.

“It sounds cheesy,” says Michael, “but I’ve said it’s not how you start. It’s how you finish.” We couldn’t agree more. 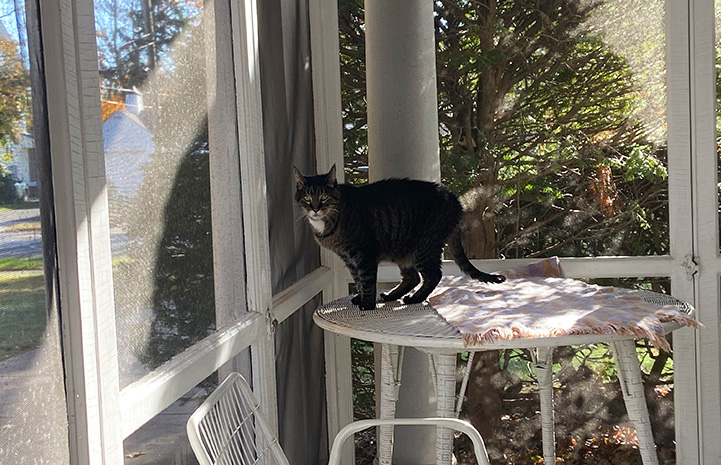 November is adopt a senior pet month, and there are many older animals just like Wilbur waiting for you to bring them home.

Photos by Molly Wald and courtesy of Michael Cox