A senior pit bull terrier mix with hypothyroidism gets help breaking bad habits, slims down and gets adopted in the process.
By Nicole Hamilton

Gary’s a laid-back guy. Long runs on the beach aren’t really his thing, although he doesn’t mind a slow hike with his family up at Big Bear or a light stroll down at the beach. He’s cool with anyone who comes to the front door, sees no reason to bark at the mailman and is a great lover of the couch and snacks (although he once tried to turn a couch into a snack, but that’s in the past).

Usually you can find the 10-year-old pit bull terrier mix hanging out with Pebbles and Stella, his fellow canines-in-residence. Adopters Dianne Larson and Donny Kuhn say Gary is often the best behaved of the three. And that’s really saying something, because there was once a time when Gary was apt to make some trouble, even when all he wanted was to make friends. 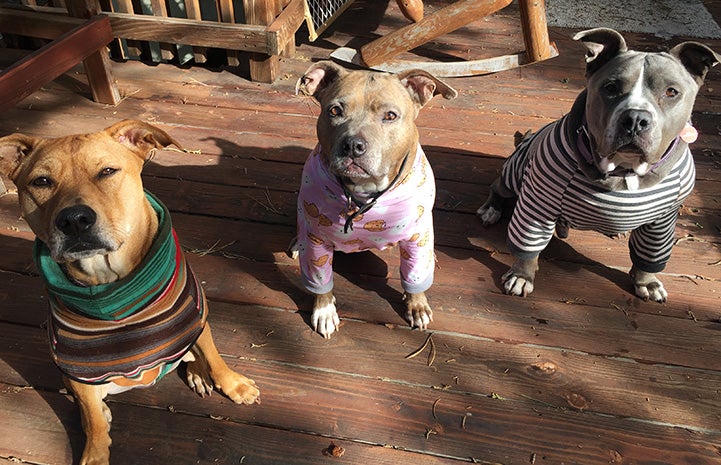 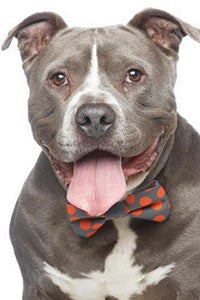 Gary, along with his brother, Larry, was brought to the Best Friends Lifesaving Center in Los Angeles from a Los Angeles Animal Services shelter. Back then, he was often anxious in his kennel. On walks he was apt to “pancake” by flattening himself to the ground. He also had a reputation for tearing up couch cushions in the meet-and-greet room.

“Gary had a bad habit of grabbing anything he could get his mouth on to play with it,” says Janelle Metiva, dog behavior specialist. “Part of the problem was that he was just so excited to be in these spaces.”

If all this wasn’t enough, Gary also has a chronic medical condition called hypothyroidism. Because of it, he tends to gain weight easily, and that can lead to other health issues if he isn’t on a special a diet and daily medication. But there’s so much more to Gary than his habit of chewing on things and a thyroid that doesn’t quite work the way it’s supposed to. Simply put, he’s got personality in spades. “He’s curious, loving and has a silly side, too,” says Katrina Albers, lifesaving and care specialist.

Gary became a bit of celebrity at Best Friends. Volunteers and staff members at both Best Friends L.A. locations snapped and shared photos galore of him on Facebook and other sites, hoping someone would give him a closer look and adopt him. He was the subject of fan art and countless sweet testimonials. And one Best Friends staff person even produced coffee mugs that featured Gary as a chef. 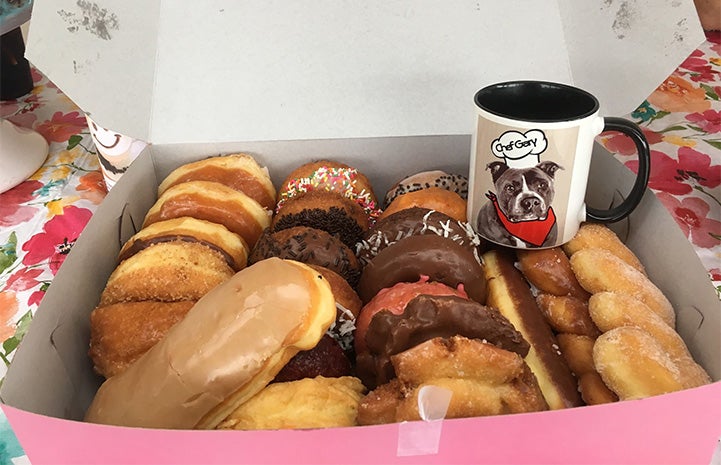 All Gary needed was a home where he could be, well, Gary. But first, he’d have to break some of his habits, so the team got to work.

To help him stop chewing on things, the dog behavior team created a comfy home environment in his kennel, complete with items he’d be tempted to chew on so they’d lose their novelty. “We decked out the largest kennel with extra bedding and blanket options, plus a chair with blankets, pillows and eventually those tempting cushions,” says Janelle. “And always lots of toys.”

They also devised a plan to help get Gary in shape. When he first arrived at Best Friends, he didn't want to exercise because the thyroid condition made him lethargic; however, once it was under control he lost a few pounds and his energy picked up.

One of Gary’s biggest fans — volunteer and dog trainer Kate Shelley — became one of his biggest advocates. She made a promise to stick by him and work in tandem with the dog behavior team to help him be the best version of Gary that he could be.

“Patience is the key with Gary,” says Kate. When he plopped down and refused to budge on their first walk, Kate knew exactly what to do ― nothing. “Walking on a leash wasn’t a familiar routine for him at all. In fact it was quite the opposite.”

From then on, Kate let Gary set the pace on walks. At first, it took them about an hour to walk around the block, but with every walk came a little more progress. Eventually they could make it around the block in about 15 minutes.

All those walks (and a little extra playtime in the yard) paid off. Gary lost quite a bit of weight and started looking and feeling like a new man. There was a spring in his step, and his cushion-free diet was working wonders. Now all he needed was a home. 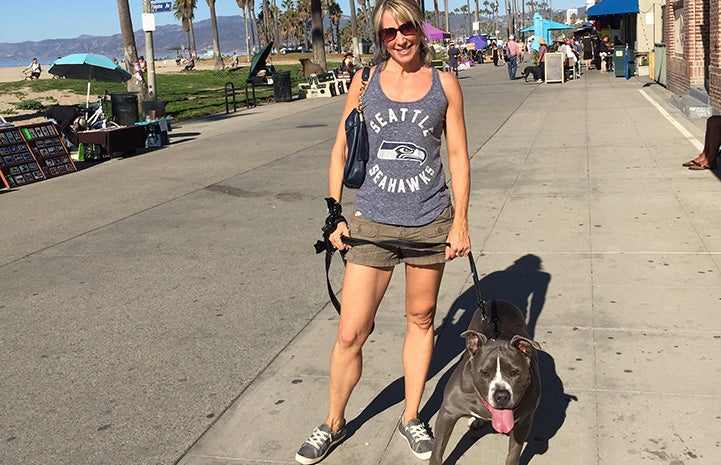 Dianne, who volunteers at the NKLA Pet Adoption Center, and her boyfriend, Donny, were also big Gary fans. They jumped at the chance to foster him on weekends when the center started the Slumber Buddies program. Eventually, Dianne began bringing Gary home almost every weekend so he could continue practicing living with a family again.

There were a few rocky moments, and Dianne had to keep a close eye on her couch cushions. But the toughest moment was saying goodbye come Sunday. She could tell Gary didn’t want to go back, and deep down she didn’t want him to, either. She told herself that soon someone would adopt Gary, and every week when she showed up to volunteer and saw him still there, it broke her heart.

Maybe it was taking Gary a little longer than most other dogs at the center to find a home, perhaps because of his age and chronic medical condition. Sometimes that’s the case. Or, just maybe, Gary had known his adopters all along.

It turned out to be the latter, because after a few months of short-term fostering, Dianne and Donny decided to try fostering Gary full-time. By then, he was already a part of the family, so they made it official and adopted him. 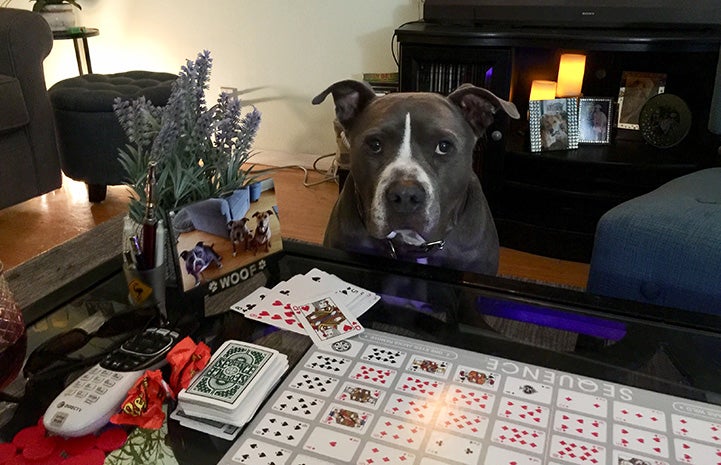 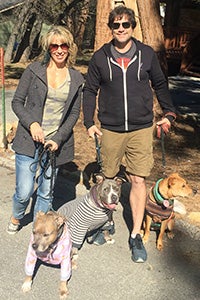 “The Gary that everyone saw at the center is not the dog Gary is today,” says Dianne, noting his tendencies to get anxious and chew everything in sight are gone. (Although, just in case, she always has on hand plenty of toys that he can demolish.) “He’s the type of dog who just wants to see what’s in your hand,” she says. “He’s very curious.”

Gary’s hypothyroidism is easily managed by a special diet and daily medication. Dianne reports that he weighs in at a healthy 72 pounds. He’s a big boy naturally, she says.

Gary is also a natural at napping and lounging in the sun, plus he’s a master at taking everything in stride. He gets along great with Stella and Pebbles, who have welcomed him into the pack. In fact, when he plays with Pebbles (who’s much younger), it’s hard to believe he’s 10 years old.

“You just have to let Gary be Gary,” says Donny, who is loving having another guy around the house.

On a recent visit with Gary, Kate was amazed at how well he’s doing. And though he’s making great progress, she knows that if he needs help, Kate is only a phone call away. Kate hasn’t forgotten her promise. “It took a few years, but we did it,” she says. “I cry when I think about how Gary never gave up.”

Dianne says sometimes she catches Gary lounging about with a big smile on his face, almost like he’s saying: “I’m finally here. I finally have the life I’ve always wanted.”