Senior schnauzer and trucker: Born for the road and each other

Image
A senior schnauzer and is adopted by a trucker who was looking for the perfect dog to travel the road with him in his semi. Read delightful story.
By Christelle L. Del Prete 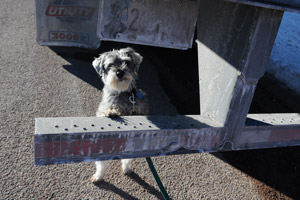 Garrett, a scrappy senior schnauzer mix, probably didn’t rank high on every adopter’s list, even though he is just a mature gentleman who sometimes didn’t feel well and wasn’t afraid to let people know it. He has a few health issues, including a congenital heart defect, and he’s lost quite a few teeth due to dental disease. On days when he didn’t feel so stellar, he could be a bit grumpy about being handled, putting up a fuss to show his displeasure. He also didn’t hesitate to grumble at other dogs if he didn’t want to play with them. When a trucker named Thom came in looking to adopt a dog to travel the lonely roads with, Garrett sat quietly in his run, as if he sensed he wasn’t quite what Thom was looking for.

In fact, he wasn’t. Thom was originally thinking of adopting two dogs to accompany him on his cross-country trips. A Best Friends adoption specialist suggested he focus on finding a dog who fit the most important bill – one who would be comfortable riding in the big rig and living life on the road. Thom agreed. But he was hoping that the best fit would be a sweet pit bull terrier. 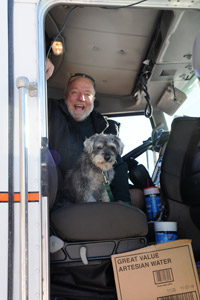 Dogtown caregivers introduced him to several dogs, but the sparks didn’t fly until Thom saw Garrett. Something about the little dog piqued his interest. Small, furry and feisty might not have been what Thom pictured as the perfect travel buddy, but he and Garrett actually have a lot in common. In addition to sharing a few minor health issues, both are a bit rough around the edges, but both are far more bark than bite.

It was a match as far as personalities go, but there was one more test Garrett would have to pass before he could ride off into the sunset. Dogtown caregivers and adoption specialists watched in anticipation as Thom brought Garrett out to the "rig" to see how he'd react to it. Garrett wasn’t going to pass up this opportunity; he sauntered right up to that semitruck like he'd been around it for years.

And when Thom lifted him up into the cab and turned on the engine, Garrett didn't even flinch. Instead he settled right down and made himself comfortable in the cab. Like Thom, Garrett seemed born for the road. So the two drove off, heading toward their next destination on their first of many road trips.

Made for each other

Since he and Garret hit the road, Thom reports that the “two old truckers are getting along just fine.” His brother, who helps Thom (and now Garrett) keep up with his correspondence while trucking across the country, reports, “Garrett has adapted to life on the road very well and is having a great time with Thom,” and that “they seem to have been made for each other.”

Garrett has found his perfect home, but there are plenty of other adorable, adoptable dogs at the Sanctuary.